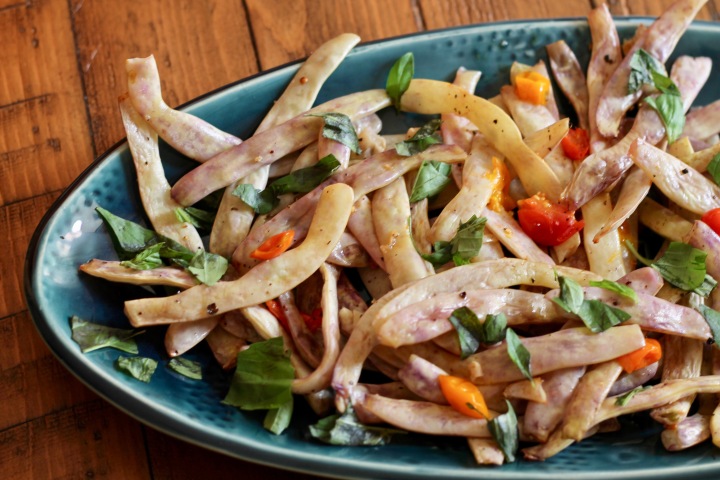 It goes without saying that moving is a tricky business. You collect your things, box them up carefully (or haphazardly; it really depends on the stage of the process), and, ultimately,  hope for the best. The last time the Greek and I did this, we were sure that some of the potholes we had hit along the way were bound to have broken some of our things, but, as it turned out, everything arrived intact; it was only when we unpacked everything and began to put the pieces together again that things started to break, either slipping from our tired hands while being washed or from being placed rather foolishly in the dishwasher, that frenemy of many a cook. 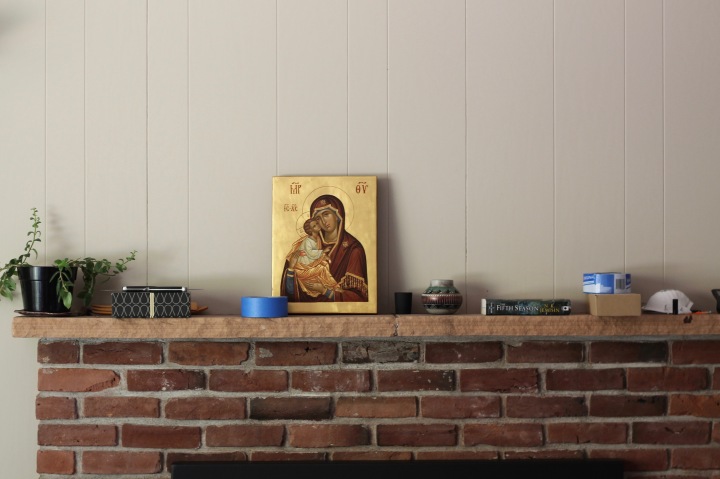 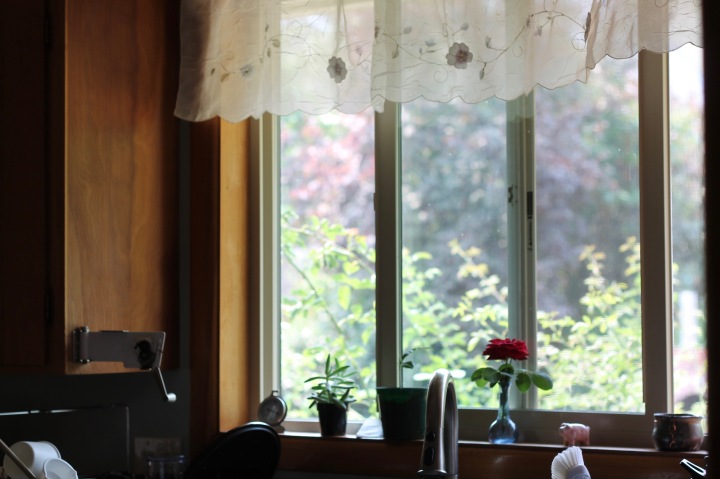 This time, however, we had a moving company come in, help us pack up the kitchen, and transport our belongings across the country; while we’ve had little cause for complaint (nothing, knock on wood, has been found broken thus far), there were a few moments that left us scratching our heads, like the discovery of a sealed and labeled box that we thought contained cocktail glasses, but, after tearing it open, discovered was nothing but empty. We’ve also struggled to find things; for some reason, our silverware, still in the bamboo drawer organizer it lived in in Delaware, was wrapped several times in packing paper and packed in an odds and ends box that we never would have looked in had we not been searching for a missing box of photos (which, luckily has since been found, but not with the silverware). So, in a way, the past 17 days have been full of surprises. 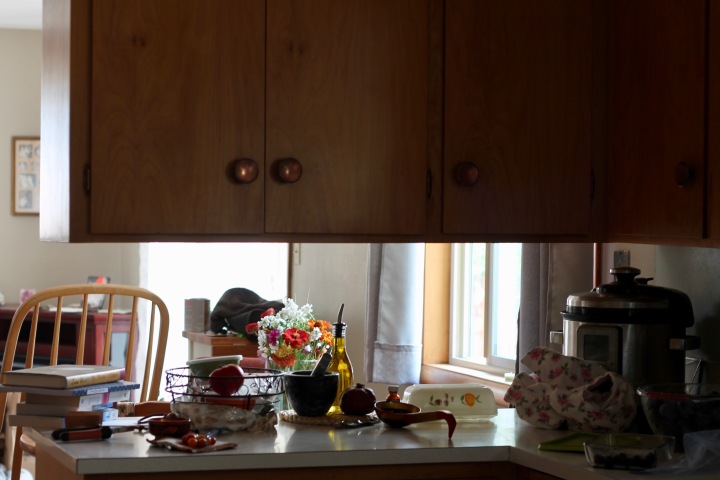 When you are buying a house, like buying any object, you immediately see it as the thing that is going to transform your life. “In this house, my life will be perfect,” you think, just as you do when you covet that new face cream that will revitalize your skin or those new clothes or glasses that you imagine will suddenly give you an edge. But, of course, you’ve spent all of 10 minutes with any of these things and when they become a part of your life, they are still their essential selves just as you, dear reader, are always your essential self, new house, cookbook, or face serum aside. All of this is basically my way of saying that, although we are still very happy with our purchase, the shine, shall we say, is beginning to wear off a little. Maybe it all started when we moved in and, two days later, the kitchen sink was clogged. It’s hard to imagine how we could have caused this, given our brief time in the house, but it was clogged so badly that the garbage disposal was causing water to overflow on the other side of the sink. This wouldn’t have been so bad–of course, a sink should be functional, but we weren’t doing much cooking, so it wasn’t essential–had I not gotten the brilliant idea of bringing in the flowering artichoke that we found waiting for us in our garden when we arrived. I decided to rinse it off before setting it in a small vase and, as soon as the the water started flowing, earwigs, more earwigs than I had ever hoped to see in my life, came pouring out of the choke….and, of course, they had nowhere to go. (The sink has since been fixed, but this was a rough beginning.) Or maybe it was when we discovered, or, rather, the beagle discovered, that there were plenty of gaps in the fence where she, a consummate escape artist, could squeeze through; this has led to our getting to know all of our neighbors immediately, as well as one woman thinking I’m a bit daft, as she has yet to see me with a dog, but has definitely seen me confusedly wandering around several times in my nightgowns with a bag of dog treats. Really, I’m lucky she never called the police because she’s definitely seen me peering over the neighbor’s fence with my cell phone flashlight at night. 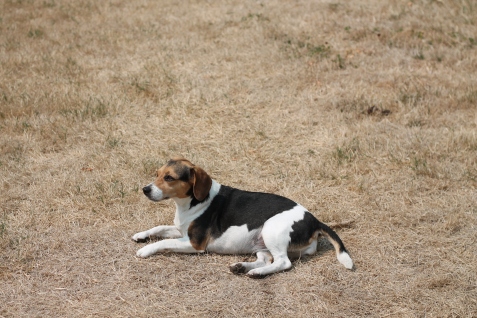 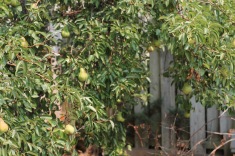 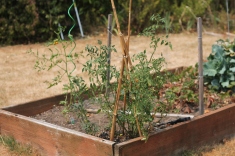 And while you inherit some problems in a home, you also can create them yourselves quite easily. One day we discovered that the Greek, who had been painstakingly refinishing some of our hardwood floors before our stuff arrived, had left a wet mop with wood finish sit on the floor for a few days, which basically negated several days of hard work by leaving a nasty stain. In and of itself, the mark on the floor wouldn’t have been so bad, but it led to the foulest of moods, which in turn led to the most hasty of actions. Before we both knew it, the bookcase that he then decided it was essential to pull across the floor right then and there, got stuck, fell backwards and, in one of those horrible slow motion moments when you can do nothing but watch the inevitable happen, fell right onto the arm of our couch and put a big hole in the wall behind it. Needless to say, it’s been an adventure, but the good news is that not only are we getting there, but also that nothing that has happened is irreversible. 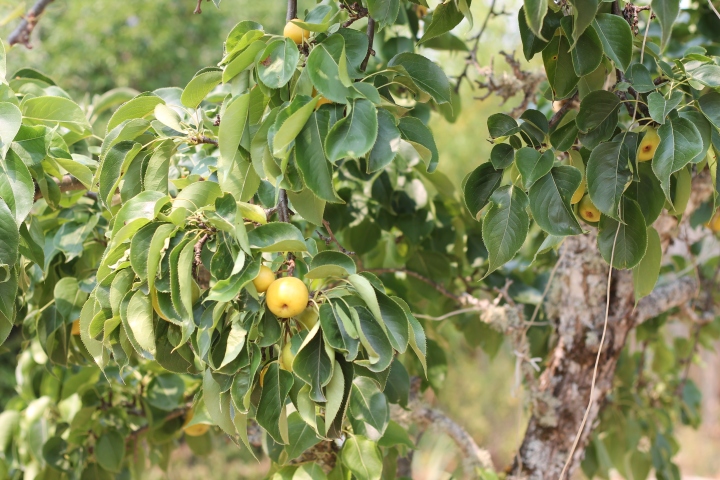 The craziness of the past few weeks and the sheer amount of work (and money, oh, the money) that goes into getting settled and furnishing a house aside, there is a lot to love about our new town and life. We’ve been welcomed rather kindly by our neighbors, who have treated us to the bounty of their gardens and fruit trees; we’ve also discovered just how prolific our own little garden-orchard is, as we’ve already been inundated with plums and made one batch of Spiced Plum Butter (with this much fruit, it seems likely that the Hungry Beagle Preserving Company I’ve always dreamed of is bound to become a reality here). And despite the maze of boxes we’ve been contending with, we’ve managed to venture beyond the home front to join our local co-op, to find the best tacos in town, and and to peruse the offerings at the local farmers’ market, which is quite the event and is full of such variety and summer goodness that I almost (just a smidgin) regret that we’re leaving for Greece tomorrow. 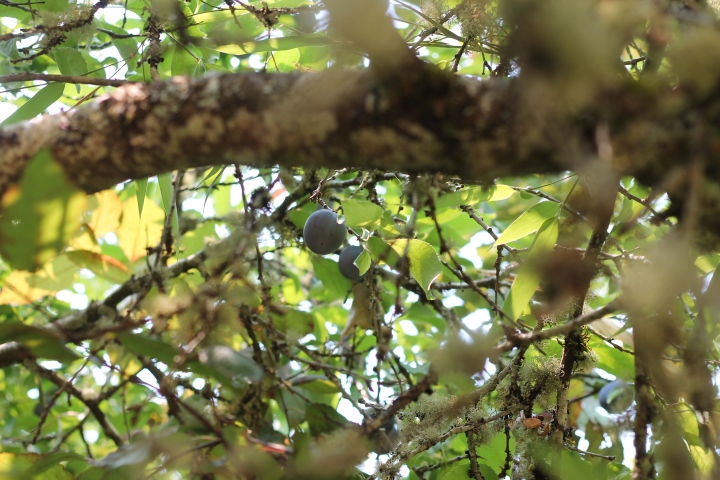 Before setting off on this journey with my swimsuit, stack of novels, and very amateur knitting, I wanted to share some of this summer goodness with you all. If this seems like a strange recipe to share, as it’s basically a non-recipe of sorts, I should say that I’ve been thinking lately about blogging, food blogging in particular, and about how food blogs often don’t represent the way people actually eat on a daily basis. In a way, I’m guilty of this too, since not only do I love a good kitchen project and culinary challenge, but it also feels like some of the cooking that I do is so easy as to be unremarkable, which is why I only rarely, if ever, write about these more “everyday” dishes. It may all boil down to what my favorite professor in college called Chekhovian conundrum: “What is worth telling?” Is it the prosaic or is it the extraordinary? While both certainly have their place in life and kitchens alike, I, like Chekhov, happen to be a firm believer in the (narrative) potential of the everyday. And when the everyday happens to come in the form of Dragon Tongue beans, a Dutch heirloom variety that, with its purple and creamy yellow speckled pods, would have been a worthy subject of the Dutch masters, it hardly feels right to keep this secret to myself. 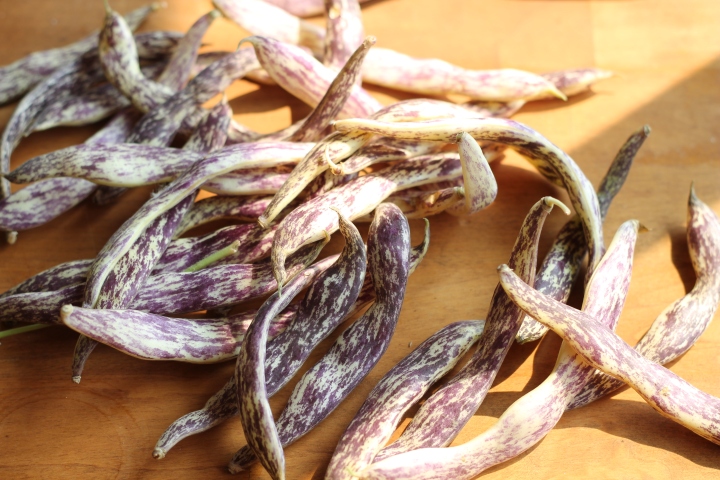 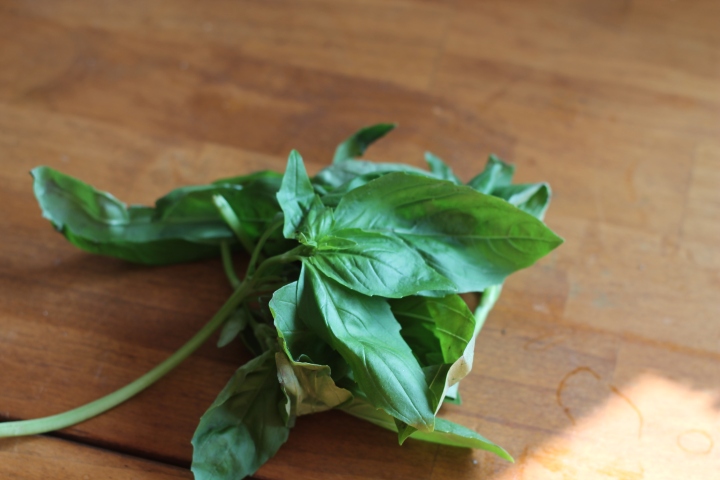 The beauty of the Dragon Tongue bean is that you can eat the whole bean–even raw! The colors of its flesh indicate its age: purple speckles signify youth, whereas a mature Dragon Tongue bean would be red and fit only for shelling. When I was at the farmers’ market last week and saw them, I asked the woman working the stall how one would prepare them. She said that the farmer loved to roast them, which surprised me, as I had never really heard of roasting fresh wax beans; I asked if they should be blanched first, but, again, she surprised me by saying no. I decided to buy a pound and made them with dinner, following her advice and just roasting them at 375 F for 20 minutes with salt and pepper. They were sweet and crisp, a welcome side dish to sausage, although, as anticipated, their vibrant colors faded in the heat of the oven. When I saw them again at the market this past weekend, I made a beeline for them, but this time I decided to be a little more adventurous in my preparation. Inspired by the green bean section of my favorite Vegetable Literacy, I decided to add grated garlic and a handful of cherry tomatoes to beans before roasting them, and, once everything emerged from the oven, topped it all with torn basil leaves. Since a little acidic burst of flavor never hurt anybody (I think), I sprinkled some red wine vinegar on them, too. The combination is pure summer: sweet, tangy, bright, and fresh. The only problem is that they require you to turn on the oven, which on these 90 F + days is asking quite a lot. I promise they’re worth it, though. 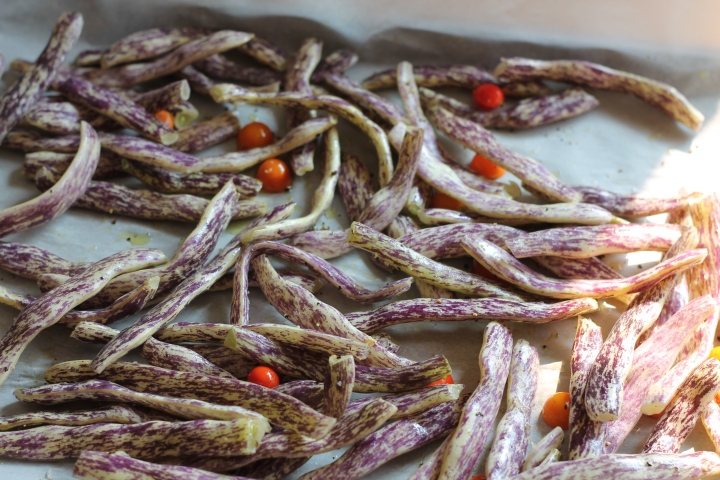 about 1 pound (around 520 g) Dragon Tongue or other fresh, young wax bean

splash of red wine vinegar (no more than 1 tbsp)

Roast for 20 minutes, or until the ends of the beans look slightly shriveled and the tomatoes have begun to pucker. Remove from the oven and place on a serving platter. Sprinkle the basil evenly over the beans and tomatoes, then sprinkle with the vinegar. Taste and adjust the seasoning, then serve.

3 thoughts on “A Taste of the Oregon Summer”