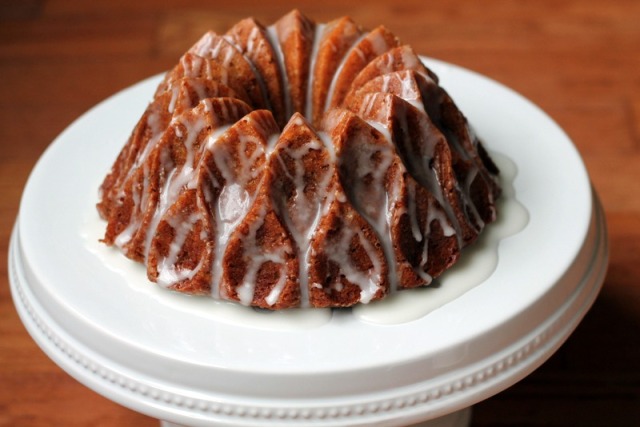 I’m so glad I live in a world where there are Octobers. -L.M. Montgomery (Anne of Green Gables)
Yesterday, while texting with a friend, I mentioned that I would like nothing more than to fall into fall. Or really, at this point in time, just to fall over, preferably into a large and comfortable bed. This may seem a little extreme, but, believe me, the past month, from Labor Day until now, has truly been a doozy. There was apple picking, round 1, which resulted in 19 pounds of Orange Honey (a specialty of a local Maryland orchard, so local in fact, that the Greek and I biked there. Mind you, I did question the intelligence of biking to an orchard, as, in my mind, the whole point of apple picking is to collect pound upon pound of apples, more apples than can possibly be carried on a bike, but, even without proper transportation, we did okay for ourselves) and Honeycrisp; the arrival of the Greek’s parents; the start of the fall pottery term (I have already made two bowls, a pumpkin and several tiles) and a road trip to Pennsylvania for the final (!!) wedding in the “year of weddings,” which, though a lot of work, was everything I had hoped it would be, from the cookies to the weather (when there are photos, I will again break my No. 1 Blogging Rule and share them here). It was the strangest thing, but even though the forecast for the Saturday of the wedding said it would be 74 and sunny, the PA wedding seemed to usher in the fall, as the weather that day was quintessentially autumnal–misty, chilly and damp. And, since then, fall hasn’t let up. 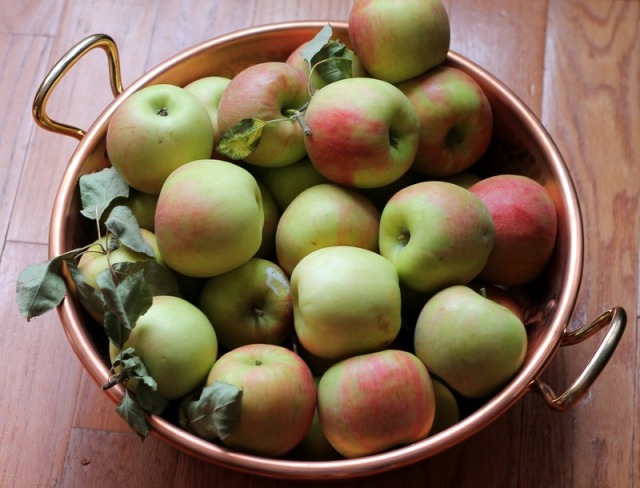 Although there is a tiny part of me that is sad to see the summer go (I already miss the long and bright days, not to mention the mornings spent tending to the plants), I am absolutely over the moon about the end of mosquito season, the crisp weather, the changing leaves and the arrival of apples, quince and, dare I say it since I know these words will come to haunt me in just a few short months, all the winter squash. But apples, apples are truly the gold standard of fall. I had forgotten how much I had missed them–and who can blame me as I had the best of summer this year with tons of apricots and peaches and cherries–but, after going apple picking, I again found myself slipping into old habits, munching every day on my favorite snack of an apple with an overly generous tablespoon of peanut butter (protein!), with a wily beagle watching my every move and hoping against hope that a small piece would make its way onto the floor. This happens only sometimes, primarily because I am rather selfish when it comes to my most comforting afternoon ritual, but also because beagles shouldn’t get too big for their britches (as if this hasn’t already happened 😳🙄) . 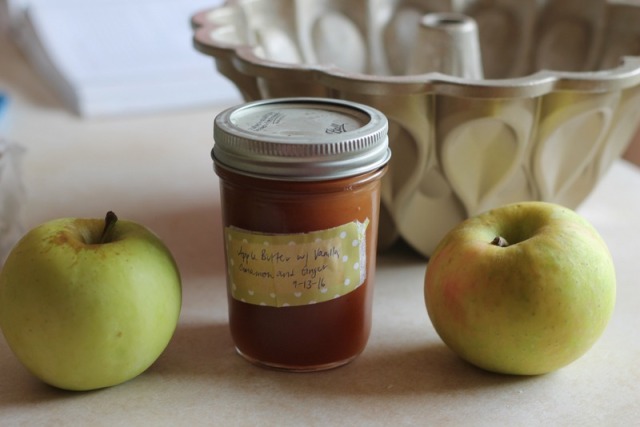 Besides my obsession with apples and peanut butter, I also have a rather large soft spot for apple desserts. On this blog alone, I’ve featured two apple cakes, one German and one Italian, as well as roasted apples with agave (an ideal topping for vanilla ice cream) and an apple and peanut butter tart, and these recipes don’t even reflect my complete fall baking repertoire. There isn’t time enough in the world to pay tribute to all of the apple desserts that I love–gluten-free crisps that sing notes of butterscotch, French apple cake released, as one blogger put it, from the “tyranny of cinnamon,” a simple cake with nuts and spices that easily doubles as breakfast–although I am certainly more than happy to try. But as the list continues to grow with each baking book that I pick up (my next great love, I suspect, will be the much touted Apple and Marzipan Cake from Luisa Weiss’, aka The Wednesday Chef, new book, Classic German Baking), I am more than certain that I could spend a lifetime baking recipes only with apples and never manage to blog them all. 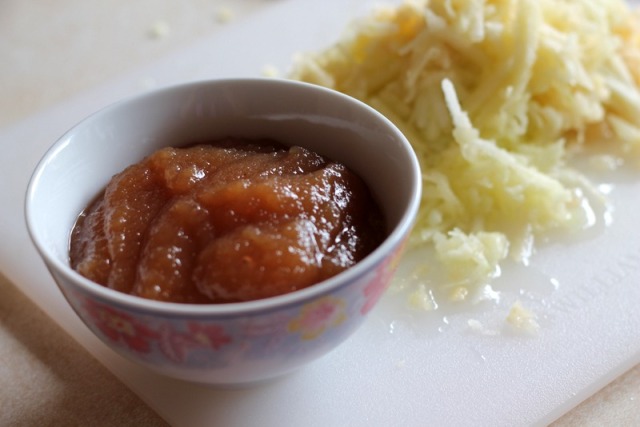 I am, however, foolish enough to try. My latest apple cake du jour (or, really, du mois), in fact, is practically an ode to autumn, perfumed with a mixture of spices and spiced apple butter. Given its  embrace of all things apple, it may just eclipse (I wanted to use another word, but am I the only one for whom the verb “to trump” has now been ruined? How does a perfectly fine verb recover from the slums of “Trump that Bitch” nonsense?) all the apples cakes that came before it. That said, there is a time and place for every cake, and this one is truly the best kind of everyday cake: simple, with both a tender crumb and a satisfying bite from the addition of toasted walnuts. Plus, thanks to the combination of grated apples and apple butter, the texture of this cake is as refreshingly damp as a dewy morning in the mountains. Forgive the brief poetic moment, but I stand by my assertion that this cake is an apple lover’s dream. 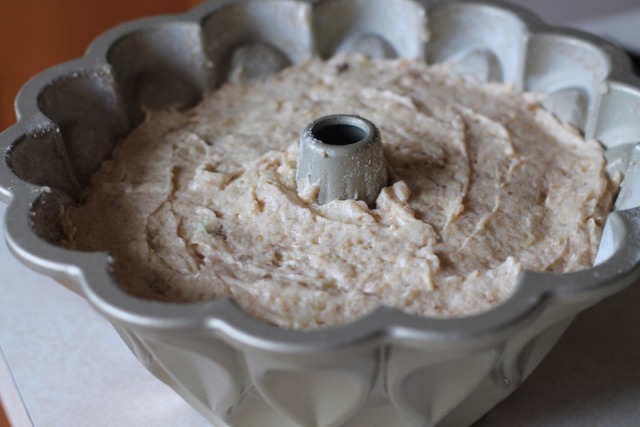 It’s hard to believe that I found it almost by accident. It was a few days after we had gone apple picking and, while I knew I wanted to make apple butter (I had had my eye on this recipe from the early days of 101 Cookbooks; seriously, even if you are not an avid follower of food blogs, all you have to do is compare this recipe to more recent recipes on the site and you will see how much food blogging has changed…and maybe not entirely for the better. And just an FYI: that isn’t a dig, but an observation), I wasn’t sure what else we should do with our apples besides eat them–obviously, what a sad predicament. I wasn’t quite ready for apple pie, nor was I in the mood to repeat any of my old faithfuls. I briefly thought about Tarte Tatin, which I have always been a little afraid to make, but then decided that the path to success could lay only in the baking advice of Dorie Greenspan. I picked up my copy of Baking: From My Home to Yours and immediately flipped to the apple section of the index. Everything sounded good–firstly, it’s Dorie; secondly, it’s apples–but the recipe that jumped out at me was the ambiguously titled “Double Apple Bundt Cake.” I briefly wondered what “double apple” could mean before making my way to page 184; once there, I discovered that this was, unbeknownst to me, exactly what I had been looking for all along, a cake that combines, in the words of Dorie, “apple butter and grated fresh apples, which melt into the batter during baking.”
Even as I had found the cake to be exactly what I wanted to bake, still there were things in the recipe that I wanted to tweak. Dorie’s recipes are generous this way and, more importantly, given her own love of tweaking recipes she collects from friends and bakers from all over the world, I figured that she would approve of my changes: holding the raisins, cutting back on the sugar, substituting 3/4 cup of spelt flour, one of my go-to flours when I want to add some whole grains into my baking, for some of the all-purpose and, instead of a glaze made of confectioners’ sugar and orange or lemon juice, a glaze made out of confectioners’ sugar and walnut oil, which would be in the spirit of the Gjelina cake that I baked earlier this year. And, probably just because I like to make more work for myself, I wanted to make my own apple butter, even though Dorie says to use store-bought (I’m sure you could, but when you have more than 15 pounds of apples, you might as well be a little industrious). While I certainly can’t take all of the credit, I can say that the cake was a blazing success, devoured by the Greek and his parents (and me, too). It also served as the de facto birthday cake for the Greek’s father this year and, even if the very embodiment of an everyday cake in spirit, believe me when I say that, once baked in a Bundt pan full of decorative peaks and ridges, it becomes a cake fit for a paterfamilias. 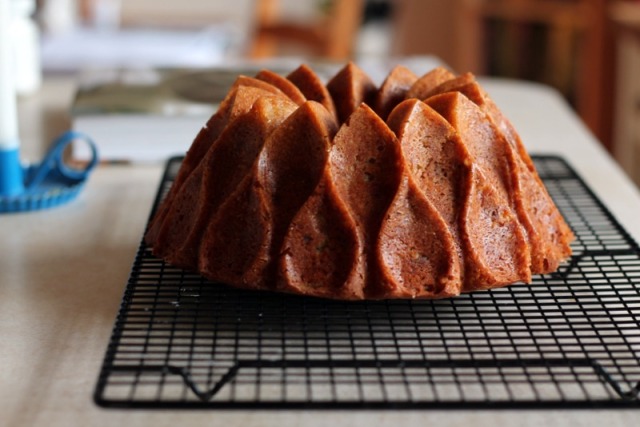 Serves 8-10
Adapted from Dorie Greenspan’s Baking: From My Home to Yours

As I made a lot of changes to Dorie’s recipe, I am writing it up exactly as I made it. The cake, when made this way, was just sweet enough (if you like things on the sweeter side, I would recommend using an additional 1/4 cup of granulated sugar) and was topped with a nutty glaze that complemented the fall-spiced base. If glaze isn’t your thing, though, I offer a few Dorie-approved alternatives below.

Preheat the oven to 350 F and butter a 10- to 12-cup Bundt pan. Dust the inside with flour, then tap out the excess. Set aside.

Place the walnuts on a baking sheet and toast for 5-6 minutes. Once cool, chop the nuts and set aside.

In a medium bowl, whisk together the flour, baking powder, baking soda, spices and salt.

Using either a hand-held or standing mixer (fitted with a paddle attachment), beat the butter and sugar on medium speed, scraping the bowl as needed, until the mixture is thick, creamy and pale. Mix in the eggs, one at a time, beating for about 1 minute after each addition. The batter should be pale and fluffy. Beat in the apple butter on low; the batter will look funny and slightly curdled, but, don’t worry, the addition of both the apples and the flour mixture will make things right.

Still on low, add the grated apples and mix until well incorporated. Add the dry ingredients, mixing on low and only until just combined (personally, I like to leave off with the mixer after a minute or two and fold the rest of the flour in with a silicon spatula). Then, fold in the toasted walnuts with a spatula. Spoon the batter into the prepared Bundt pan and smooth the top. You can also give the pan a few whacks on the counter to make sure the batter has settled into the nooks and crannies of the pan.

Bake for 45-50 minutes, or until a toothpick inserted into the center of the cake comes out clean. Transfer the pan onto a rack and let it cool for 5-10 minutes, then unmold the cake.

Dorie suggests that, once the cake has completely cooled, you wrap it in plastic wrap and let it stand overnight, as this helps to “ripen the flavors.” You can then either make the Walnut Oil Glaze–the most decadent option–or sprinkle the cake with confectioners’ sugar. Another option that Dorie proposes is that you serve the cake with applesauce.

2 thoughts on “The Gold Standard”