Goodness is a large, often a prospective word; like harvest, which at one stage when we talk of it lies all underground, with an indeterminate future; is the germ prospering in the darkness? At another, it has put forth delicate green blades, and by-and-by the trembling blossoms are ready to be dashed off by an hour of rough wind or rain. Each stage has its peculiar blight, and may have the healthy life choked out of it by a particular action of the foul land which rears or neighbors it, or by damages brought from foulness afar. -George Eliot (Daniel Deronda)

It’s easy to forget how fleeting summer is. With each passing day, I feel it slipping away; the days are getting shorter and, when out walking, I can’t help but notice that the once crisp green leaves on the trees are now giving way a faint yellowing—no matter that this yellow will eventually turn to the loveliest gold or burnt orange—and that the plants and flowers that were once flourishing have begun to wilt. I remind myself that these things could stem from the unprecedented heat of this particular summer, a summer of heat domes and record temperatures, but I can’t kid myself: the tell-tale signs of seasonal change are clear.

I suppose that this summer was always going to feel somewhat truncated to me, what with the wedding and the travel and the need to look ahead to September’s festivities, but now that it’s late August, I just want to hit the pause button and take the opportunity to eat all of the tomatoes and peppers, preferably in the sunshine. Call me simple or overly easy to please, but this, this, is my current definition of paradise. And instead of living this dream, I am currently sitting on a plane headed to San Francisco, where it is not only partly foggy, but a stressful work environment also awaits me. You may wonder how anybody in her right mind could lament a trip to San Francisco (and especially after a few boiling weeks on the east coast), but a) I never said I was in my right mind, and b) I do have the tendency to be a homebody, or, if not exactly a homebody, somebody who greatly enjoys the comforts of home and preparing my own food. 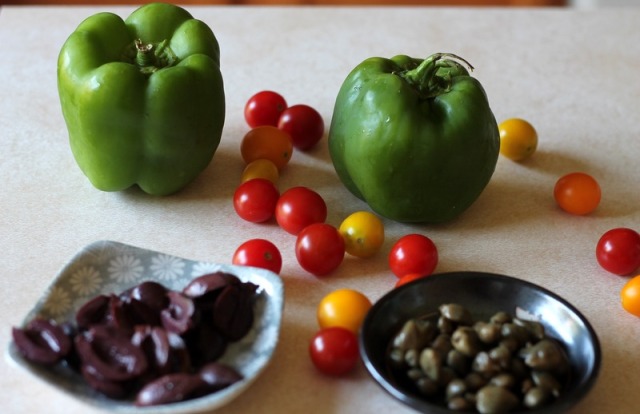 While I like eating out as much as the next person, on most days I still prefer to finish my work (brain work) and then head into the kitchen to perform the small ritual of turning seemingly random ingredients into a complete meal. No matter that this means my nails are stubby and weak and will probably be so forevermore, I am more than willing to sacrifice them. I like working with my hands, watching how the oil shimmers as it grows hot, hearing the sizzle and pop of my kitchen laboratory around me. In these moments, it’s not as if my brain, despite the overwhelmingly manual aspect of the labor, is really turned off; it’s more that it’s the moment of relaxing, experimenting and, on a visceral level, controlling the things around me in a way that, as an employee, is denied me throughout my day. What can I say? I, like the contrary and headstrong heroine of Daniel Deronda, i.e. my latest attempt to read the classics that slipped through the cracks in my literary education, enjoy being the mistress of my own fate…A part of me does find it funny that, for all the ways in which I resisted cooking as a young girl because I didn’t want to succumb to the pressures to perform the expected role of my sex (if you don’t learn to cook, my reasoning went, you will never have to do it), I now find my greatest freedom in the kitchen. How very contrary indeed.

To return to the matter at hand, though I like cooking in all the seasons, sumer affords the cook a certain luxury: an abundance of quality ingredients. While most of the time, I am loathe to do too much to these ingredients, being of the mind that a tomato ripened in the sun is best enjoyed simply (or not at all), sometimes I become either bored or inspired, mainly (and fortunately) the latter. Despite the possibility of boredom, I will also confess to a penchant for repeating a thing that I am taken with, be it a song or a recipe, over and over again. Maybe I’ll never listen to it or eat it again, but in the moment, I can’t imagine life without it. Six summers ago, it was Mark Bittman’s green bean salad; last summer was the very simple yogurt salad—labneh or Greek yogurt, cherry tomatoes, cucumber, parsley, olive oil, salt and Triscuits; and this summer’s official “the salad of summer” winner was a warm green pepper salad with feta, capers and Kalamata olives.

This salad, or the original version of it, hails from Deborah Madison’s Vegetable Literacy, which is hands-down my desert island cookbook. If I had to fend for myself on an island with no other souls around, I would want Deborah’s gardening advice, kitchen wizardry and general vegetable wisdom to be right there with me. If you’re wondering how I, a cookbook collector, could so boldly claim allegiance to just one book, let me tell you that I found this recipe by accident, as I was searching for a way to use up the peppers that we had recently gotten in our CSA box. I don’t even like peppers that much, or at least I never thought I did, but this salad, which also has the advantage of coming together quickly, was enough to convert me to into a worshipper at the altar of bell-shaped peppers, so much so that I have now gone out and bought peppers with the express purpose of making this salad. The original recipe calls for red (or yellow or orange) bell peppers (both sweeter and more mature—not to mention more expensive—than the green variety) that are seared and then combined with fried halloumi cheese and a mixture of cherry tomatoes, capers, minced garlic and Kalamata olives. From start to finish, it’s a quintessentially Mediterranean (very Greek) dish and one that speaks to my affection for all things salty, briny and vibrantly colorful. Never mind that I decided to use green bell peppers, which are more bitter, and to replace the Halloumi with a creamy feta. The salad is both perfectly balanced, yet complex, with the acidic sweetness of the tomatoes mingling with the sharpness of the capers and olives, the feta melting into the collapsed and slightly sweetened peppers and the presence of fresh mint and parsley providing a somewhat sobering, but no less welcome, influence. Whether you make it the Madison way or my way, this salad is a worthwhile tribute to summer, for as long as it lasts.

Adapted from Vegetable Literacy
Serves 2 as a meal and about 4 as a side
Large handful of cherry or grape tomatoes (100 grams), halved or quartered
about 10 Kalamata olives (45-50 grams), halved and pitted
2 tablespoons capers (20 grams), roughly chopped
1 garlic clove, minced
2 tablespoons + 1 teaspoon of olive oil, divided
2 large green bell peppers (roughly 240 grams/.5 pounds), seeded and sliced lengthwise into strips (1/2 inch thick)
3-4 oz. feta, crumbled
salt and pepper, to taste
about 1 tablespoon fresh mint, chopped
about 1 tablespoon fresh parsley, chopped
In a small bowl, combine the tomatoes, olives, capers and minced garlic. Lightly season with salt and pepper, then add 1 tablespoon + 1 teaspoon of the oil. Stir to coat the ingredients and set aside.
Then, heat 1 tablespoon olive oil in a heavy-bottomed skillet over high heat. Once the oil is hot (it should glisten), add the peppers and cook until they are seared on both sides, about 3-4 minutes per side.
Lower the heat to medium and add the tomato-caper-olive mixture to the pan. Cook for 1-2 minutes, then turn off the heat. Add the feta and stir to combine.
Transfer to a serving bowl and, if needed, adjust the seasoning. Top with chopped mint and parsley and serve, either on its own as a salad or with pita bread.

2 thoughts on “The Salad of Summer”