The night before I left Las Vegas I walked out in the desert to look at the moon. There was a jeweled city on the horizon, spires rising in the night, but the jewels were diadems of electric and the spires were the neon of signs ten stories high. -Norman Mailer
Almost three months after the conclusion of our road trip, it seems strange to finally sit down to write about it. I had wanted my account of the trip to be live, in the moment, not tainted in the slightest by the passage of time. But if there’s one thing I learned about road trips during our drive across the United States, it’s that you simply cannot plan for anything: the map may tell you that you’re four hours away, but, one traffic jam later, and you’re not arriving until your normal bedtime, which, thanks to the rules of the road, has become your new dinner time. You also really can’t anticipate how exhausting it all is, mile after mile (or, as I learned to think of it, one mile per minute), watching the landscape change and constantly wondering, despite knowing the answer, “Are we there yet?”

It may just be, however, that the Greek and I were too ambitious with our plans–at least on that first day, the day we drove from Berkeley to Las Vegas (the distance ends up being roughly 600 miles, which, if you stop once or twice, puts you at about 9-10 hours). While it must have been no later than 8:30 a.m. when we left the home of our dear friends, who, despite honeymoon jet lag and their own fatigue from spending the day with us packing boxes into the truck, had taken us in the previous night at a very late hour and then, in the early morning, sent us on our way with full stomachs and caffeine in our systems, we didn’t manage to leave Berkeley until close to noon. Much to my surprise (and dismay), the Greek had announced that morning that he had some unfinished business in the lab: some items that needed to be returned, a few boxes he needed to grab, some exit paperwork to fill out. When I suggested that he just take care of these things by mail, he refused. I suppose with good reason, too, although I came to understand the importance of this final trip to the lab only a few days later. But I’m getting a little ahead of myself here. Suffice it to say, the story will unfold naturally, in its own time.
In those final moments on campus, I was also raring to go, to sever my ties. While I felt a twinge when I saw the library, the Memorial Glade, the bench where, one summer, I read Comfort Me with Apples in the sunshine, I also realized that the time for sentimentality had passed. For weeks it had seemed like we were trapped in some never-ending cycle of saying goodbye and, finally, it needed to end. Maybe it was sheer coincidence or by some strange design of the universe, but, when the Greek emerged from Gilman Hall and we were officially ready to go, it seemed that the trip to campus–the return to the place where both our lives in Berkeley had begun–seemed to break the enchantment that we had been ensnared in. 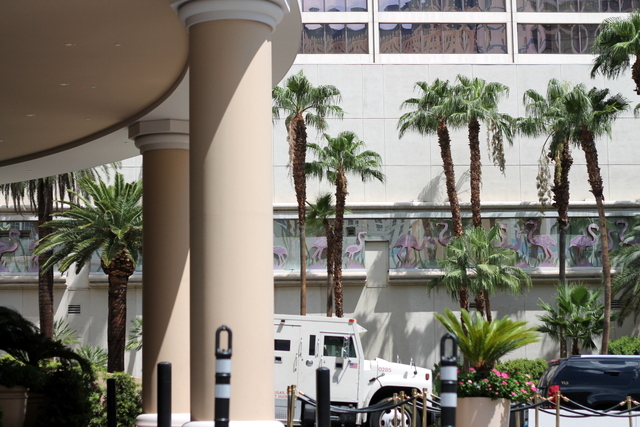 Unfortunately, the joy of our freedom was short-lived. About 45 minutes beyond the Berkeley city limits we hit a wall of traffic that put an end to any hope that we might make up for lost time and still be able to enjoy dinner and an evening stroll through Las Vegas. Our instincts were on the mark, too. Only at 11:30 p.m., 30 minutes before check-in services closed for the night, did the Penske truck make its grand entrance to the Platinum Hotel. Exhausted is several shades too weak a word to describe what we felt like at that point. Given my allergies (my allergy pills were nowhere to found; such is the punishment for a slapdash packing job) and fear of the Penske truck, the poor Greek had driven the whole way there. As we were approaching the city, I had fallen asleep several times only to be awoken by one of two things: either the sound of the Greek yelling at me like I was a two-year-old child to “Look over there! Look at that!” or the sound of the Penske truck sliding over the rumble strip on the side of the road. Though the promise of Vegas beckoned to us with its glittering lights and balmy temperature and we did feel a stirring of excitement at being there–we had, after all made it! And we were still alive!– the thought of doing anything but collapsing in bed felt like an extreme effort. We did, however, manage to rally once we got to the room, if one can call pulling a bottle of Limoncello from an insulated lunch bag, rallying. Whatever it was, sitting on the balcony in our pajamas and looking at the electric expanse of Las Vegas before us, Limoncello in hand, felt right somehow. Taking it all in, I had a flash that, if life were an art-house movie, this moment would have either been the inconclusive ending that would have angered half of the audience or the midway point of the film, after which the whole story, thanks to Vegas’ cinematic history (think The Godfather Part II, Casino, Leaving Las Vegas), would have unraveled.

Our story was much more mundane, however, and involved a quest along the Strip for just the right breakfast. The sound of Babystack Cafe‘s red velvet pancakes was tempting, but after a day of eating poorly in a truck, the promise of some vegetables and protein at Hash House a Go Go took us in another direction. But as prosaic as it ultimately was, our walk to the restaurant took us through the heart of Vegas, from the reconstructed ruins of the past to the celebration of modern celebrities (Mariah Carey, Olivia Newton John, Giada de Laurentiis). We felt the thickness of the heat, the blaring noise from the casinos, the traces of cigarette and cigar smoke in the air. I am not a person intimated by cities, but something about the very artificiality of Vegas simultaneously overwhelmed, fascinated and repulsed me.

It also, oddly enough, struck me as the most American of cities. While on the face of it that may seem impossible given the hodgepodge architectural style of the city, what could ultimately be more American than the desire to recreate the symbols of some of the world’s greatest cities on American soil–and in the most unlikely of places, too. In Vegas’ crowded landscape, which only serves to underscore its raw ambition, the city seems to be shrieking madly, maybe even gleefully, “Why go to Europe when you can have it all, and maybe even win big too, in Vegas!” 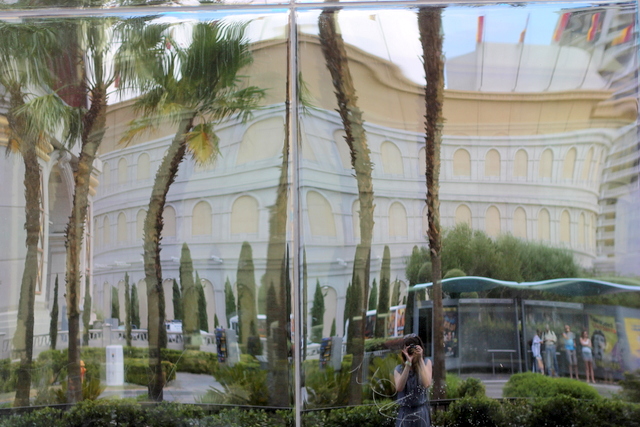 Given my strong reaction to it, you may be wondering if I even liked Vegas. I myself don’t know really know. But I certainly didn’t regret stopping there on our trip. I liked taking photos of Las Vegas’ sprawl–there is something magnificent about the decadence of the landscape; one moment you see trumpeting angels and the face of Caesar, then you turn and find an over-sized Tiffany lamp and signs advertising the Restaurant Savoy–and was intrigued by its ability not only to represent nothing and everything at the same time, but also to merge, however strangely, the past and the present. As a thriving desert metropolis, it appears to be a Petra for the modern age. Its desert location should never be underestimated, either; it was sweltering the day we were there (106 F), and even the mist that would regularly shoot out of the nozzles attached to most of the buildings on the Strip did nothing to soften the glare of the summer sun. 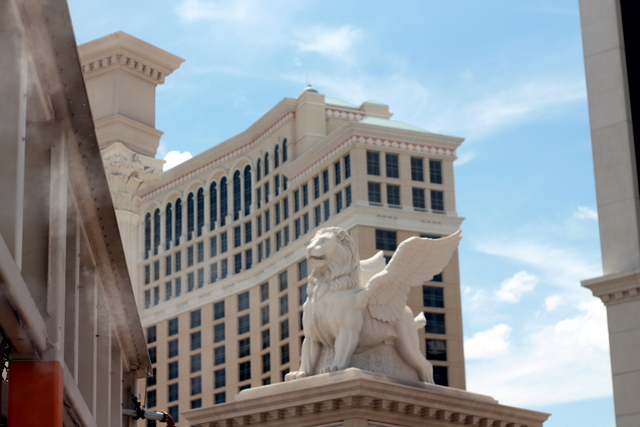 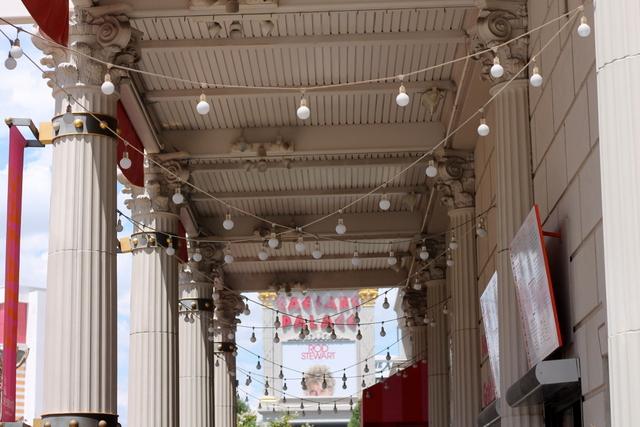 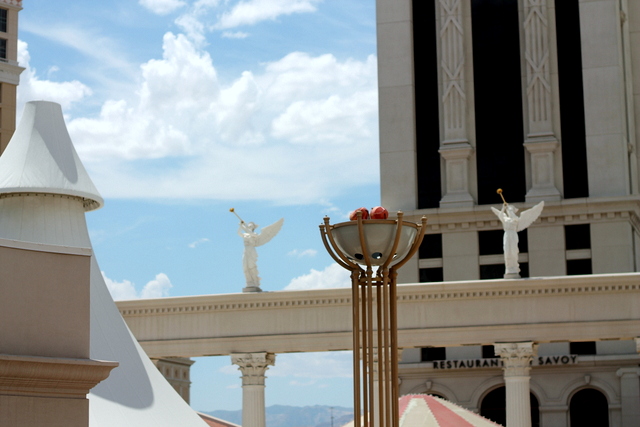 By the time we got back into the Penske truck and were again on our way, this time to the Grand Canyon, I must confess I was ready to go. In the course of five hours, I had bumped my head on a close-up of Giada’s gleaming image (she is everywhere, in bright pink and with her ample cleavage on full display), accidentally touched the metal railing on the stairs by Caesar’s Palace and eaten a biscuit the size of my fist bedecked with a sprig of rosemary so tall and thick that it would have lasted an army of Italian grandmothers two whole weeks in the kitchen (even the garnishes in Vegas embrace excess). According to most standards, this was but a pathetically small taste of what Vegas has to offer, but, according to my own, it was just right. I had gotten what I had come for: a glimpse of an American city I had never been to, but heard much about. It was also the beginning of our southwestern adventure and, even with the sun beating down on us and all of our worldly belongings, it seemed an auspicious start. We were well and truly on our way.