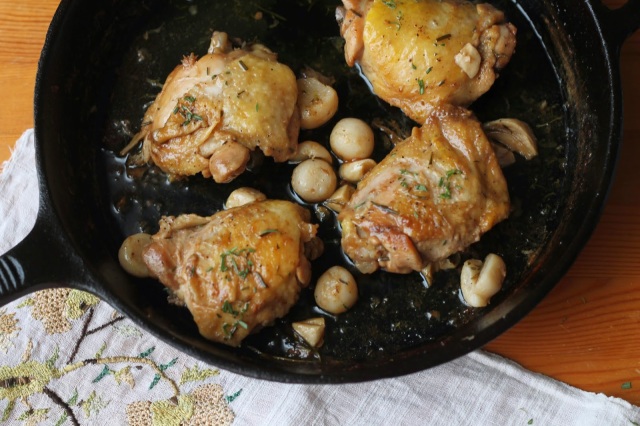 This past summer, while having dinner with a friend and her parents, we started talking about the dishes that we would always ask our mothers to make when we were home visiting. For my friend, the answer came quite easily: spaghetti and meatballs. When it was my turn, however, I had to stop and think. It’s not that my mother doesn’t have a “signature” dish or that I haven’t asked her to make various things over the years (high school was all about broccoli and cheese casseroles and mashed potatoes; when I came home from college with what I considered to be a more refined palate, I would ask for her Italian wedding soup or risotto); it’s more that my tastes are always changing. After taking too long to respond to what was ultimately a very simple question, I said that my mother makes this wonderful chicken with vinegar, rosemary and garlic. But somehow I felt that I hadn’t quite done justice to the dish; through my hesitation, I had made it sound bland when it was anything but.

After that conversation, I found myself craving my mother’s chicken constantly, so I called her to get her recipe. The funny thing is that my mother, like a lot of mothers, doesn’t use recipes; she cooks from instinct, from memory, according to her mood. Listening to her responses to my questions, I quickly realized that it didn’t matter how my great-grandmother had created the recipe (my theory is that, faced with the difficulty of buying alcohol in Pennsylvania—this is real, Californians!–she had no choice but to rework a classic recipe for Italian chicken), how much olive oil my mother used or whether she chopped her garlic or left it whole, I was fully capable of recreating this dish. All I had to remember was to use bone-in and skin-on chicken thighs (if you’re going to eat the bird, you might as well maximize the flavor and eat it as nature intended), to add one cup of apple cider vinegar, as well as the all important rule in my mother’s kitchen: to use an ample amount of garlic and rosemary, i.e. the more the better.

Although I failed to make this dish back in 2006, when I first decided that I would learn to cook by using family recipes, I now see how very simple it is–even foolproof–if you rinse and pat the meat dry before attempting to brown it (this will allow it to brown in all the right places), and give the liquid the time it needs to reduce. Not only will it turn into a sticky glaze flecked with rosemary and cradling softened whole cloves of garlic, but the vinegar will also tenderize the meat, imbuing it with a sweet acidity. Given the minimal amount of work involved–such is the beauty of braising–this chicken yields a lot of flavor. Call it family pride (speaking of which, happy birthday, Grandma!) or simply good taste, but I would say it’s nothing short of delectable.

Vinegar Chicken with Rosemary and Garlic
Yields 4 servings
I’ve found that the method of braising with vinegar works well with root vegetables too, especially Tokyo turnips. The last time I made this chicken, I added eight turnips to the pan about halfway through the braise; by the time the sauce had reduced, the turnips were fork tender and flavorful. I imagine the same would happen for chopped carrots.

4 chicken thighs, rinsed and patted dry with a paper towel
1 teaspoon kosher salt, plus more to taste
1/4 teaspoon pepper, plus more to taste
1-2 tablespoons olive oil (enough to coat the pan)
6-7 cloves garlic, peeled and lightly crushed and halved
1 tablespoon chopped rosemary, plus 1 small bunch
1 cup apple cider vinegar
about 2 cups water (how much water you use will depend on your skillet)
6-8 Tokyo turnips, optional and, if large, halved


-Rinse the meat, pat dry and then season on both sides and set aside.
-Heat the olive oil in a large skillet, preferably one with a lid, but, if not, parchment paper will do.
-Once the oil is hot, add the chicken thighs, skin side down. After 5 minutes have passed, or once the the chicken is golden brown, turn the thighs over and repeat on the other side.
-Add the garlic and rosemary, letting them cook about a minute. Once they are fragrant, add the vinegar and and enough water so that the liquid reaches about halfway up the chicken thighs. Turn the heat to high and keep stirring all the while in order to deglaze the pan.
-Let the mixture come to a rolling boil, then lower the heat to a steady simmer and cover the skillet with either a lid or parchment paper. If using a lid, leave it cracked a tiny bit so that the liquid will reduce.
-If using, add turnips after about 30-40 minutes of braising.
-When only about 3/4″-1″ of liquid remains in the skillet (after about an hour), remove the lid or parchment paper and continue to simmer until a glaze has formed.
-Once the glaze is ready, turn the chicken thighs over so that both sides have been coated with it.
-Place the chicken thighs on a serving dish and pour the vinegary sauce over them.
-Serve with a salad (any leftovers make an excellent addition to any salad; the chicken tastes wonderful cold), some sauteed greens, or a side of bulgur or some other grain.

2 thoughts on “Anything But Bland”