But I don’t think it matters what my darling said. She was always merry. -Charles Dickens (Bleak House)
I’ve written this post no less than a hundred times in my head. Back in mid-December, it was going to be about a family recipe for a deliciously tangy braised chicken, but, by the time the sauce turned into a sticky sweet glaze, the lighting was all wrong and I couldn’t snap a photo of the final product. A blogging fail, in other words (I will try again and soon, though; the recipe deserves to be shared)! Then, in Pennsylvania, I planned on writing a recipe-free post–musings for the new year–but my family’s Mediterranean tempers and occasionally mafioso-like behavior (I sometimes truly feel that the family history is told in such a way that we might as well be in either the Naples or Sicily of the 1950s, nursing the wounds of the past and plotting the demise, Corleone style, of our biggest enemies, who, much like dear Fredo, turn out to be on the inside) pushed me out of the calm zone in which writing takes place and into a position that felt more like a harried diplomat trying to satisfy two deeply obstinate parties. Though I can remain fairly composed in the most trying of circumstances (the one perk of years of training), there was a moment when, pushed almost to the brink, I exclaimed to the Greek: “I think I’m going to need a vacation from my vacation!” By the time we made it back to California, the new year had taken yet another unexpected twist, which left me struggling to regain my footing. In short, I was never supposed to be away this long, but life, as the cliche goes, simply got in the way. 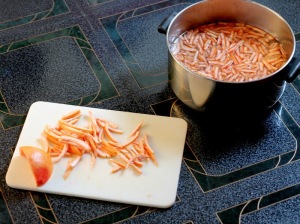 Although I was away for longer than I would have liked, I have to say that I’m glad I waited to return to this space. While I have no problem addressing the bittersweet side of things and going beyond the studied prettiness of food blogging, I spent the first few weeks of the year really despising 2015 and believing that it might contain nothing good. I swore that my preferred flavor of the year was bitter;  to show my seriousness, when I was out I found myself ordering Campari and soda or something made with Amaro and, every day towards the end of my lunch at work, rather than reach for something sweet, I would pull out a bag of kumquats and, while reading Bleak House, slowly eat them, simultaneously relishing and wincing at their strange mixture of bitter, sour and sweet. I’m happy to report, however, that both my inherent optimism (yes, the Dickens quote from Bleak House with which I began this post was not meant to be ironic. It is more so aspirational) and sweet tooth have triumphed in the end. 2015 is beginning to look more bright and miniature peanut butter cups have made it back on my desk (admittedly, they are the dark chocolate kind, so bitterness has not been entirely dispelled, but we all know that bitter can definitely sometimes be better). In part, this change of heart is due to handful of happy things–a baptism, the surprise engagement of a friend, a few evenings out with friends, going here, here and here–and the beginnings of an outline of our, the Greek’s and my, future. Since nothing is decided yet, I don’t want to speak too soon and jinx anything, but needless to say, there has been some cause for excitement. 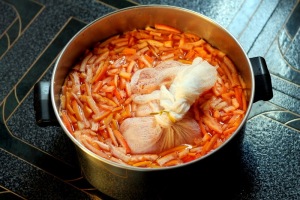 I also have to say that, though I’ve been missing blogging, there are moments when I can’t help but appreciate the quiet. The internet sometimes seems so noisy, like everybody is jockeying to be heard, that all I want to do is close the computer and curl up with my Dickens (at age 31 and 1/2, I am finally reading Dickens–not A Christmas Carol Dickens, but Dickens at his lenghtiest, plot weaving best; naturally, I opted for a novel about the law) or something as comforting and inviting as Elizabeth David’s Italian Food. At moments like these, I realize that I’ll forever be hopelessly old-fashioned, made giddy by descriptions of both foggy legal procedure and the joy in making a pot of beans. This was never more apparent than when the Greek and I were in Pennsylvania. I had made the bold decision not to take my old and heavy laptop with me, which meant that my days passed in a strange, yet welcome way: no glare from a computer screen, lots of time to think and lots of doing–truly, lots and lots of doing and making. There was homemade spaetzle, a pizza night with my grandma and even a bûche de Noël! My next post, which I am committed to producing at least one week from this one, was also a Pennyslvania project. But the crowing achievement was the grapefruit marmalade that we made on New Year’s Day. Not only was it the exact thing I had had in mind when I ordered my grandparents 25 pounds of citrus and canning jars for Christmas (I’ve decided that the best gifts have an edible element) but it was also a strange precursor to my preference for bitter things. Truly, the beauty of this marmalade rests in its brilliant pinkish-orange shade, in its almost overwhelmingly sweet taste, which is followed by a welcome hint of bitterness that makes the marmalade taste nothing but perfectly balanced.

The recipe comes from Diana Henry’s beautiful Salt, Sugar and Smoke, which I’ve written about before. I turn to this book often–so often that it might just be my favorite preserving book. It’s both comprehensive and inviting; the photos draw you in and the simplicity of the recipes makes you feel that you might be able to take anything out of your fridge and, with a little effort, transform it into something that will brighten and enhance your pantry. This is precisely the case with Henry’s grapefruit marmalade, which, unlike most marmalade recipes, can be made in one afternoon, rather than the classic three. While there is something to be said for slowly cooking things and for giving the flavors time to rest and blend, Henry’s marmalade is made none the worse by its being a somewhat speedier process than most. Truth be told, it’s not even a speedy process; the grapefruit must be peeled, juiced, thinly sliced, boiled, reboiled and then heavily sugared. I cringed at the 10 cups of sugar measured out in a large bowl, but the amount ended up being just right. Always remember when canning that not only will each fruit taste somewhat different from the next, but also people’s preferences will also differ, which might mean more or less sugar. That said, if you’re going to go the trouble of making grapefruit marmalade, you want the grapefruit to taste like grapefruit: bitter, bright and bold. The goal should never be to clobber and mask the grapefruit with sugar, but, ideally, to nudge it into a subtle and reluctant sweetness. There is, after all, a season and a flavor for all things.

I’ll be back soon with something sweet to balance out the bitterness. The new year’s goal, besides remembering to be merry, is to be here, to be creatively engaged, at least once a week. Because I find that the food world is noisier than ever these days, I’ve been planning, in addition to recipes, some “Dining with…” posts that will involve different authors and that will satisfy a different kind of hunger; I believe Dickens will be the first on the menu. “Food for Thought” will also be back come February 1. A belated happy new year to you all!
Pink Grapefruit Marmalade
from Diana Henry’s Salt, Sugar, Smoke
yields 8 (1/2 pint or 1 cup) jars
4 large pink grapefruit
juice of 1 lemon
9 1/4 cup water
10 cups granulated sugar
-Quarter the grapefruits and squeeze their juice into a large and deep saucepan or a dutch oven.
-Scrape the membranes out, making sure to catch all of the seeds, and place both in a square piece of cheesecloth. Tie and secure the cheesecloth (a sanitized kitchen clip might be necessary) and add it to the saucepan.
-Stir in the juice of one lemon and add the water. Set aside.
-Cut the grapefruit peels into thin (1/4 inch) shreds and add them to the pan with the other ingredients.
-Bring the mixture to a boil, then reduce the heat and simmer gently for up to 2 hours (my peels were soft after 1 1/2 hours), or until the peels have completely softened.
-At this point, remove the cheesecloth bag with the membranes and seeds and set it aside. Stir in the 10 cups of sugar and, while stirring frequently, cook on a low to medium low heat until it has completely dissolved.
-Squeeze the remaining juice from the cheesecloth bag into the pan.
-While the mixture is coming to a boil, take the time to prepare the jars: preheat the oven to 250 F and wash the jars and place them on a cookie sheet. Once the oven has reached 250 F, place the cookie sheet in the oven.
-Once the marmalade starts boiling, prepare a candy thermometer, hooking it to the side of the pan (make sure the tip doesn’t touch the pan’s bottom). Start checking the temperature of the marmalade once it has reached a roiling, fast boil.
-About 12 to 15 minutes after the candy thermometer reaches 220 F, or when the mixture takes on a glossy sheen, start testing for a set using the wrinkle test (place a small dish in the freezer and, when you think the jam looks ready, remove it from the heat, spoon some onto the cold plate and put the plate in the refrigerator. After a few minutes, remove the plate and gently push your finger into the jam. If it wrinkles, it’s ready; if not, put the pot back on the heat and keep cooking and repeat until it has thickened to the desired consistency).
-Once ready, remove the pan from the heat, skim any scum that rises to the top (both leftover cheesecloth and a small mesh strainer are good for this) and let cool for about 10-12 minutes. While the marmalade is cooling, remove the jars from the oven, but leave the oven on.
-Spoon the marmalade into the jars, leaving a headspace of 1/4 inch from the top. If any should spill on the rims of the jars as you’re filling them, wipe it off with a damp towel. Cover with the lids and screw on the rings until snug. Place the filled jars back in the oven for 15 minutes to process.
-Remove and set on a rack. The sound of the jars sealing should be music to your ears.

4 thoughts on “Bright and Bitter”