When I first read these words–a well chosen epigraph–in Molly Wizenberg’s Delancey, I felt like I had finally picked up a book that I could, at long last, sink my reading teeth into. In their own way, both Wendell and Molly were describing the very things that had been on my mind for months: aimlessness, a lack of purpose and the constant question, “where is it all going?” While I realize writing about these issues can, to a certain extent, be more than a little depressing (believe me, there is true melancholy in a continuous stream of rejection letters or, even worse, the radio silence that now indicates rejection in a world where social niceties have been lost), these are the issues that, for better or for worse, informed my 30th year. Although this year began with purpose (to part ways with my dissertation) and success, it quickly descended into not only wondering what my next big challenge would be, but also how to translate Ph.D. skills into a “real world” job. I wish I could say that I got a batch of freshly baked wisdom for my birthday or that, from the safe distance of 10 days into my 31st year, I’m that much closer to figuring out the answers to these questions, but I think these are things that I’ll continue to grapple with until I no longer have the time to think about them (i.e. a time when I will be both pleasantly and gainfully employed). Or until I start working on the idea for a book that suddenly came to me on Thursday afternoon (!)–a much needed jolt to my parched ambition and desire for meaningful labor in my daily life.

My job woes and plans for a bigger project aside (excitement must be tempered until I at least draft a proposal), I should stress that life has not been too sour lately. There have been plenty of sweet moments, too: there was the excitement of my birthday and a marvelously elegant–from flavor to presentation–dinner at the Chez Panisse Cafe, a few evenings out and lunches with friends and, rounding things out, the Greek’s birthday, which was celebrated at the new(ish) Greek restaurant in Berkeley, Pathos (to enter their restaurant’s site, I love that you have to click on an octopus; as T. Susan Chang recently wrote, mainstream food culture is suddenly embracing the octopus in unexpected ways). While all these celebrations mean that we’ve been eating out a lot lately, there have also been leisurely evenings at home with Midwestern pizza (a new favorite) and early mornings spent preserving spring onions.

I suspect that, in part, I’ve recently become obsessed with preserving because of the season; who doesn’t want to bottle up a bit of spring for the endless stretch of dark and chilly days that will eventually come (remember that for those of us in the Bay Area, they will be here sooner rather than later)? But I also know that if I were to go deeper into my motivation, this is as much about self-preservation and control–to prepare for the coming months in the only way that I can–as it is about a desire to save the best of the strawberries and spring onions. Given this urge, I’ve been reading Kevin West’s Saving the Season feverishly, perhaps in a way that is not so different from how one who is recently overcome by a wave of faith might read the Bible. If that is too profane a metaphor, let me put it another way: an endlessly wise and useful volume, it proudly sits on either the kitchen or the coffee table and is rarely, if ever, returned to the shelf; also, if anybody visits and notices it, I will only too happily preach its many virtues. While it’s true that I have always been a fan of cookbooks and have quite a few favorites, West, for me, goes above and beyond. He manages to craft a narrative that is highly readable and anecdotal and that simultaneously offers a scientifically accurate study of different methods of preserving (the recipes work). I would even go so far as to call him a poet-scholar who maintains a high research and writing standard throughout the lengthy tome and manages to convey a wealth of information, from the cyanide content of apricot pits to a brief history of the Dutch painter Adriaen Coorte.

Rather unsurprisingly, one of my favorite sections of the book is the story of West’s growing library of preserving books (As he says, and I have felt this way many times myself, “Books are a vice and never let anyone tell you otherwise.”). In it, he tells of his discovery of Helen Brown, a food writer who rubbed elbows with Julia Child, Craig Claiborne and James Beard, and her largely forgotten opus, The West Coast Cookbook, which contains several preserving gems: Bodega Beans, Cherry Olives and Tiburon (shark) Onions. Not only was I immediately curious about Brown’s book since, after so many years here, I now feel tied to California and West Coast cooking (the cover, too, makes it impossible not to love this book), but I also felt compelled to make these agrodolce (sour and sweet) Tiburon onions despite my many misgivings about alliums.

Although I’ll never be the kind of person who can enjoy raw onions on a salad or sandwich, in recent years I’ve come to love (braised, roasted, sauteed and all) leeks and to appreciate the transformation that takes place when you soak raw onions in vinegar for 15 minutes. West’s reworking of Brown’s recipe promised something even better than this quick trick, though: a sweet, spicy and sour treat that could spruce up a simple pizza, salad or sandwich with its rich oil-,  herb- and tomato paste-infused sauce. 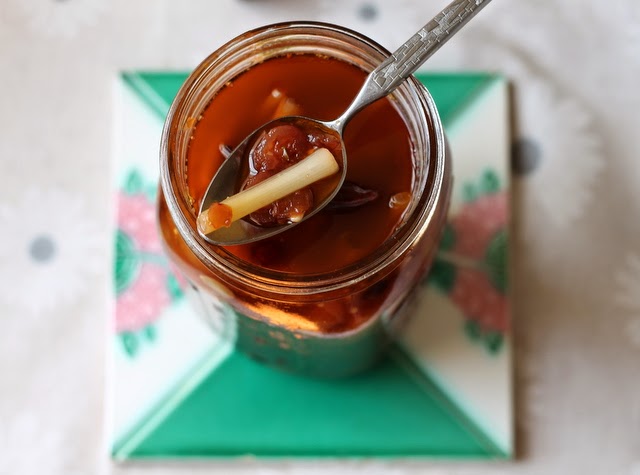 From start to finish, it’s a beautiful dish to look at it. It begins golden-hued and speckled with mustard seeds and various herbs, but once heat is applied and a little stirring takes place, quickly turns a brilliant and shiny brick red (you have give the tomato paste time to color the wine and vinegar based sauce). It’s also incredibly easy to make; besides soaking and trimming one pound of onions (I should note here that mine were generally thinner and less bulbous than I would have liked), the only work is a little bit of stirring and sterilizing a jar. For the most part, you can just sit back and relax as the onions simmer in the bright sauce until fork tender and enjoy the aroma of sweet and sour flavors coming together that will sweep through your home.

As I mentioned above, the original recipe calls for one pound of spring onions that are about 2 inches in diameter. While I had about 4 spring onions that fit this description, most of my onions were very thin and not terribly round; to make up for this, I decided to harvest some of the heirloom onions (Crystal White Wax, a pearl or pickling onion) I’ve been growing in my window–mainly for the chives since I never expected real onions to materialize–to make up the difference. I used about 4 of these, which means that my jar of agrodolce spring onions comes in a variety of sizes. You should use what you have on hand and know that, for the most part, the recipe will still take the same amount of time–1 hour and 45 minutes. You want the liquid to reduce, at least a little.
Also, while West suggests a tart Chilean Sauvignon Blanc, because the Greek and I decided to drink some of this bottle, I ended up opening a bottle of a more tropical Sauvignon Blanc (Pongo from New Zealand) to make up the difference. I like the flavor, so again I would stress that you use what you like and/or have.
Unlike a lot of people, I don’t dislike raisins, but I will admit that I was surprised to see them in this recipe. I was a bit skeptical at first, but because the Greek’s mother had left us some raisins–a mix of sultanas, currants and dark–I decided to use them up. West calls for only golden, but I opted to do a mix. This just changes the flavor a little, but I find that I like the variety. If you are very anti-raisin, feel free to leave them out.

-Soak the onions in cool water for 5-10 minutes to soften their skins. Then, peel and cut off their stalks. Carefully cut off or scrape away the root, making sure not to sever the base. Leaving this intact will ensure that the onions remain whole while cooking.
-Place the onions in a medium saucepan and cover with wine and vinegar. Add the remaining ingredients and then bring to a boil. Reduce the heat and bring the mixture to a simmer.
-Using a wooden spoon, stir gently from time to time so as to prevent sticking.
-While the onions are cooking wash and sterilize a wide-mouth pint jar (following the Blue Chair Jam method, I like to do this in the oven at 250 F).
-Cook for an hour and 45 minutes, or until the onions are tender enough to be pierced with a fork or knife.
-When the onions are ready, pack them into the prepared jar (depending on the size of your jar and the yield of your onions, you may have extra, which you can put in a small bowl to be used right away) and, using a funnel, pour the agrodolce sauce over them.
-If planning on using immediately, allow the jar to cool and then store in the refrigerator indefinitely. To process for shelf storage, make sure to leave 1/2-inch headspace and to clean the rim of the jar before sealing. Process in the oven at 250 F for 15 minutes.