Sometimes the hunter would stop for a moment; then he would hear the many-voiced drone of the life of midges, small birds, worms and ants, and the rustle of the lumps of earth that this population harried and shifted about, so as to feed itself and stay active. The forest was like a crowded city…Moist birch leaves shone in the mist with the green inner light of their lives; invisible insects were rocking them in the steamy damp rising from the earth. -Andrei Platonov (“Among Animals and Plants“)
When I look at the calendar, I keep marveling that May is already here and that April, which brought the Greek’s parents here for two lovely weeks, now feels like the distant past. Of course, I know that it’s a bit of a cliche to talk about the speedy passage of time, but I can’t help it: it really does seem to be passing by extraordinarily fast these days! I think part of my unrelenting focus on the fleeting nature of time stems from the knowledge that I’ll be turning 31 in nine days (I like to think of this as a tiny step forward into my new decade). There’s a part of me that wonders how I got here–wasn’t it just a few months ago that I was planning a  3-course dessert party and thinking about filing my dissertation–but that’s the thing about time: it weaves a spell that leaves you feeling a little bit dazed, not to mention more than a little bit confused. 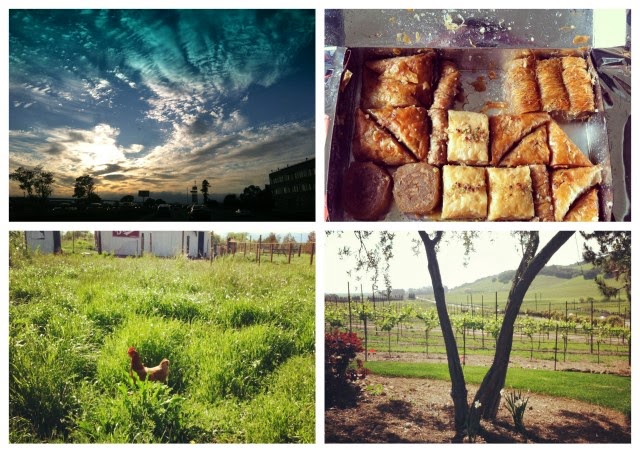 I felt this way for much of April. With the arrival of the Greek’s parents, real life seemed to fade into the background. From the night we drove to the airport to pick them up (the sky was cinematically stunning–the kind that production design teams dream about and that usually heralds a positive change) to our first weekend outing to a vineyard in Sonoma, there was more excitement and more adventure in our days. This is what I love about visitors–or at least about most visitors: they break your routine in a way that makes you feel like you’re suddenly not only doing more, but that you’re living some kind of fantasy life (in this case, an afternoon wine tasting on a sunny Saturday afternoon, followed by lunch at the always fabulous Fremont Diner, where roosters literally rule the roost and beautiful strawberry buckles adorn bright blue plates). While this may seem a hyperbolic description, I’ve found that the older you get (and, yes, here I am harping on about age; it’s the wise old ghost of my future-31-year-old-self hanging over me!), the more you tend to deny yourself these small luxuries for the sake of fulfilling your various responsibilities (or perhaps that’s just what this last year, a hopefully atypical and transitional year, was about. I’m optimistic that my fate has not been forever sealed). 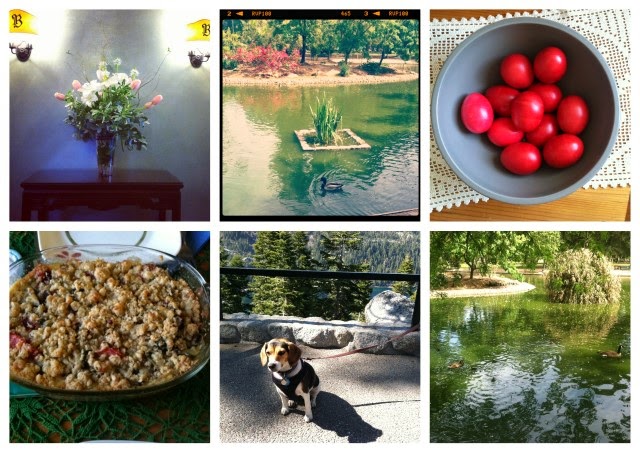 Even in Berkeley, where there was still work to be done, dishes to be washed and little beagles to be exercised, new possibilities opened up. There were more than a few meals out, but I also got to  splash out one evening and make the Beet, Greens and Cheddar Casserole that Melissa Clark had written so enticingly about in the Times (verdict: it more than lived up to the hype and is worth it for the oat and thyme topping alone, although it was a time-consuming recipe to tackle on a weeknight) and, on a warm Saturday evening, I braved turning the oven up to 500 F to make the recipe for Roberta’s Pizza that Sam Sifton had made sound like the endgame of pizza dough recipes (verdict: in the house, it may just be the endgame of pizza dough recipes; my grandma, who then made the recipe on my recommendation, agrees). I had been promising the Greek’s parents pizza for their past two visits and I wasn’t going to let the opportunity slip away a third time. Feeding people–and well–is important to me and I was glad to get to go the extra mile on a few occasions. 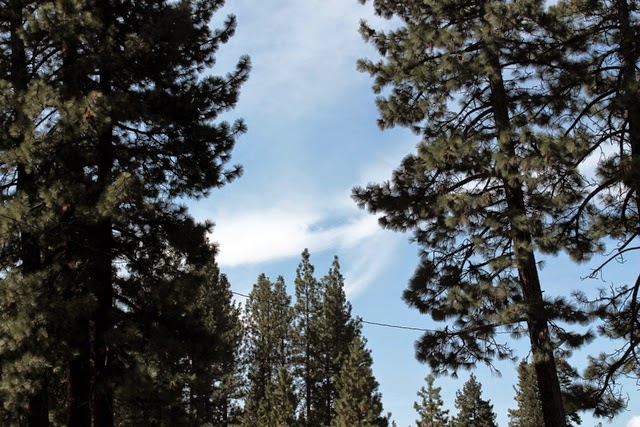 There weren’t as many home-cooked meals as I would have liked, but that’s because of another luxury we allowed ourselves after much debate: a weekend in Lake Tahoe. While it’s true that my last trip to Lake Tahoe was anything but Heavenly, this time it was nothing but sunshine, blue skies and relaxation. In short, it was the perfect Lake Tahoe reset. 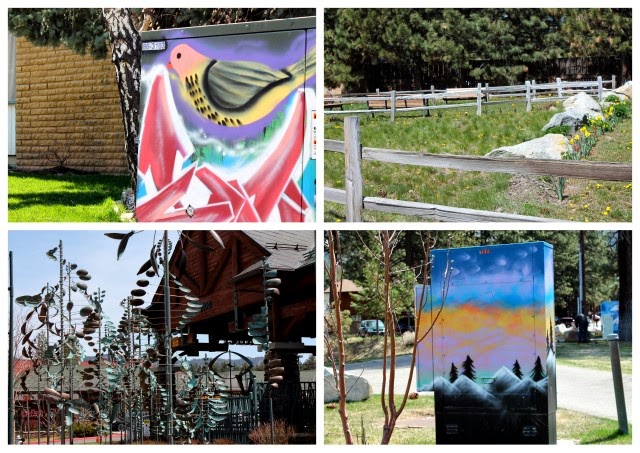 This time, Tahoe was in bloom, humming with life. The landscape that greeted us was green and vibrant, and being able to explore on foot allowed me to find several examples of Tahoe “graffiti” (really, it’s art in the truest sense of the word), which were almost as stunning as the natural landscape.

I often say that you can measure my happiness on any occasion by how many pictures I’m taking. If I’m preoccupied, worried or annoyed (usually because of hunger!), I feel less compelled to seek out interesting scenes. But there were so many picturesque things on our walk through South Lake Tahoe that even had I been in a less than stellar mood, I think I would have found reasons to capture a few moments. Something about the landscape was particularly inviting that day, or maybe it was the light. Simple scenes–acorns on a table, for example–seemed transformed, like descriptions from fairy tales come to life. There’s so much about Tahoe that feels like you’re hovering on the brink of another world; one second there are cars passing by and all it feels like is human civilization with an especially pretty backdrop, but then, at the next, you feel the weight of the landscape and the absolute silence of being alone in nature’s vastness. Even at tourist destinations like Emerald Bay, which was our last stop, you can’t help but be captivated by the landscape. For some reason, that day its jewel-like color seemed all the brighter. I’m sure this was just an illusion, but maybe it was also the result of being with good company.

After a whirlwind weekend of fresh mountain air and an otherworldly landscape, we made our way home to finish our Easter preparations. While last year we had a small dinner–a lamb feast–at home, this year we were invited to partake in the Easter celebrations of two friends, a freshly ordained deacon and his wife, who now has the privilege of being (called) a deaconess (as an American who is denied the exciting titles that exist in Europe, I can’t help but be impressed). Most of Easter Sunday was spent cooking: there was the traditional liver soup, mageiritsa (ma-year-eat-sa), which, though it smells lovely and incorporates the all-purpose Greek egg-lemon (avgolemono) sauce that I love, I can’t bear the thought of eating. Why? It’s a soup made of offal (primarily liver). Consider this the one area in which I fail to be an adventurous eater. Because this was the main course for our Easter lunch, I decided to make my current favorite pasta, the Creamy One-Pot Spaghetti with Leeks, for myself. If you need any convincing that a recipe for one-pot pasta can surpass traditional pasta, the Greek’s father, a man who does not give empty compliments, took one bite and said, “Fantastiko.” 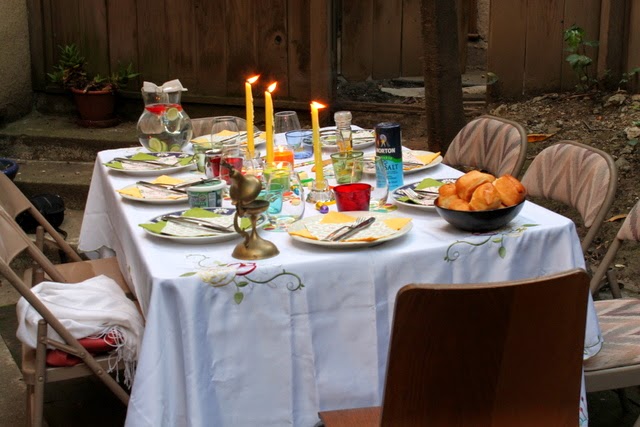 Easter lunch was certainly filling–the starchy pasta certainly helped– but there was a lot more to come with dinner. When we arrived at the home of our friends, we discovered that their outdoor patio had been transformed. Truly, the table was so beautifully set and the weather was so agreeably Mediterranean that it was everything we could have hoped for in our celebration. Although it’s true that the Greeks (and the Serbs. Really, any Orthodox faith) take Easter very seriously and find, as I’ve been told, the Easter spirit in California to be more than a little wanting, there was so much laughter, good food and healthy competition when we “dueled” with our bright red Easter eggs that I like to think we channeled something akin to the atmosphere in the Balkans.

After Easter, time seemed especially cruel, as if it had sped up only to hasten the departure of the Greek’s parents. Just like that, it was back to routine. While this may seem a lamentable state after such a luxurious and surreal two weeks, we recently discovered, after a health scare with our little beagle (all now seems to be well) and a potential job offer that caused excitement and then quickly fell through, that there is a definite upside to the staid and steady.
More on all of this soon; although I’ve been silent–largely preoccupied–I’ve still found time to be very productive in the kitchen. A spring salad, fancy jam and agrodolce pickles are all coming your way!

4 thoughts on “Hurtling Ever Forward”