The past few weeks have been several shades of brutal. No matter what I’ve been doing, whether speed reading a book with a looming library due date or keeping up with the piles of dishes that always manage to accumulate when I’m looking the other way, I’ve felt more than a little pressed for time. It hasn’t helped that I’ve had a small cold, meetings have been popping up at work that I wasn’t even aware of and a trip to the gym left me feeling like a decidedly tired and achy 30 year old. But this past weekend, when the Greek and I took a trip to Monterey to celebrate our annual “Christmas in California,” it was like I managed to hit pause on the chaos and just breathe. 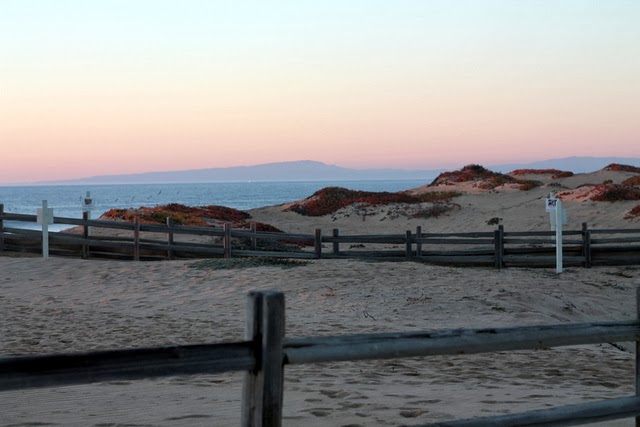 We stayed at a resort called “The Sanctuary,” which lived up to the promise of its name. From our window, we could see the endless expanse of the Pacific and our room, which had a little patio with two Adirondack chairs, was right on the beach. Needless to say, it was an ideal and restorative setting, beautiful as well as serene. There’s something so invigorating about waking up, having a walk on the beach and inhaling fresh, salty sea air; it makes you feel alive. The dog was in her element too, chasing seagulls, playing fetch and rolling in the sand. We all enjoyed ourselves so much that it seemed sad to leave it all behind, but reality–and the last few days of work before getting on a plane to Pennsylvania–beckoned. 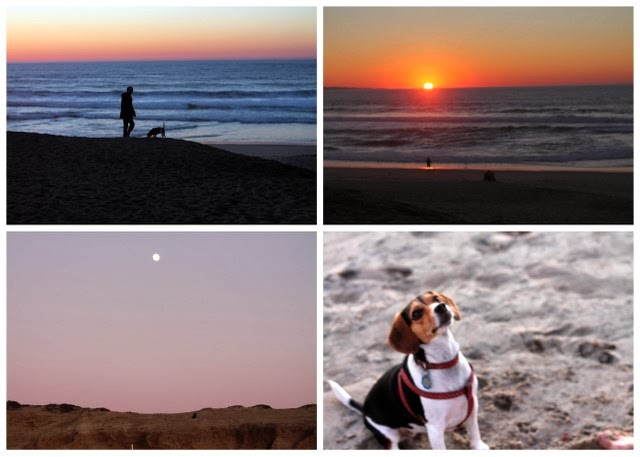 Although this past weekend was certainly unparalleled, a few Sundays ago, we managed to have an equally nice day, one that felt like a respite. There was really nothing all that special about it. It was just one of those slow days that celebrated the quiet pleasures of home: a breakfast worth lingering over, sunshine streaming through the windows, the welcome sound of the radiator turning on to combat the chill that had seeped into the hardwood floors. There was also a butternut squash dish that transformed what would otherwise have been a good dinner into a marvelous one. While this may seem fairly unexceptional, you have to understand that had somebody told me back in the spring that I would one day soon be happily eating and singing the praises of butternut squash, I would have rolled my eyes and given him or her what my friends call the “I-don’t-think-so” face.

I should add that it wasn’t always like this. There was a time in my life when I never could have fathomed that I’d one day become tired of butternut squash. To me, with its sweet, nutty flavor, it was not only endlessly appealing, but extremely versatile; I had no problem roasting it, turning it into soup or even putting it on pizza with Gorgonzola and gremolata (a specialty of this fine Berkeley establishment). But after last fall and winter, something changed. Week after week our CSA would give us not just one, but sometimes two butternut squash; even armed with numerous cookbooks devoted to vegetables, both the Greek and I were becoming increasingly dismayed by its weekly presence on the menu. And clearly, given the email our CSA sent to its list of subscribers apologizing for its seemingly endless supply of butternut squash, we were not alone in our squash fatigue. While we felt somewhat bad about our inability to eat yet another squash–isn’t this what it means to eat seasonally, after all?–we had no choice but to start giving them to a friend of ours, who was more than happy to receive some of our CSA bounty.

When we decided to rejoin the CSA this fall after a summer of vegetable choosing freedom, one of the things we debated was whether we could survive another onslaught of butternut squash. While it seemed unlikely that the farm would make the same mistake again (it seemed their enthusiasm had faded as well), we were still a little dubious. Fortunately however, Full Belly fulfilled its promise to its subscribers and this year we’ve had a wide variety of squash: Red Kuri, lots of Delicata, acorn, the almost-impossible-to-peel Hubbard and a reasonable number of butternut. And, while I didn’t think it was possible, I have to admit that I was surprisingly happy to see the butternut again after our lengthy separation. Even better, I’ve been feeling inspired, rather than oppressed, by their presence.
In part, I have Sarah of Casa Yellow to thank for this; right before Thanksgiving, she posted a Deborah Madison recipe for Skillet-Caramelized Winter Squash with sage and mozzarella. Because I believe that Thanksgiving wouldn’t be Thanksgiving without pumpkin-y things and a side of winter squash or sweet potatoes, I was tempted to make it. However, not only did I have my hands full of a hundred different things (literally), but I also couldn’t justify putting another thing either in our fridge or on the menu. I had to let this one go. But the idea stayed with me and, during the relaxing post-Thanksgiving weekend, I pulled Deborah Madison’s Local Flavors off the shelf (I’m on a Deborah Madison kick these days and Sarah reminded me that there’s more to Madison than Vegetable Literacy, one of my favorite cookbooks of 2013) and found myself thumbing through the squash section. Even though I saw the recipe Sarah had written so invitingly about, I found myself unexpectedly gravitating to another squash recipe–Persian-Style Butternut Squash (Madison refers to this as Butternut Squash Rounds with Dates and Pistachios). The ingredients simply spoke to me–Meyer lemon, parsley, mint, Medjool dates, shallots. I love bright flavors and citrus, as well as the sharp earthiness of fresh herbs. 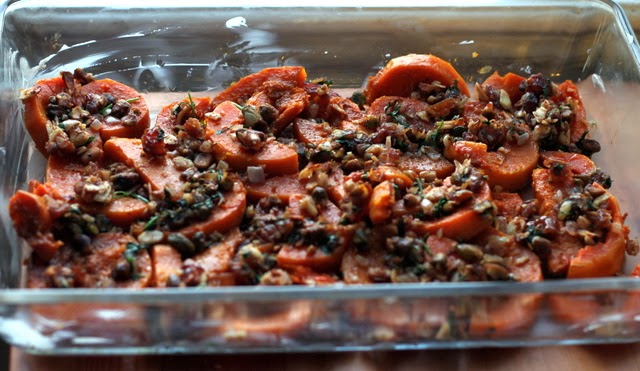 My recipe instincts were spot on. After making this dish and pairing it with a simple macaroni and cheese, I can now say that this way of preparing squash is nothing less than a breath of fresh air. Truly, it’s a fall dish with a summer sensibility, both visually appealing and flavorful. Whereas I sometimes feel that fall foods are somewhat muted and on the heavier side, this is light and fresh.  It really helps that you first fry the squash in oil, searing it (you want there to be browned and blackened bits) and then steam it for about 10 minutes; the squash softens beautifully and seems to melt in your mouth. You could stop at this stage and, with a dash of salt and pepper, have a wonderful meal on your hands, but you’d be missing out. Since the final product resembles a savory squash crumble, this means that its real charm lies in the topping: a combination of nuts, dates, shallots and garlic that provides both texture and a burst of flavor. While I’m pretty sure that I could eat this endlessly and never get sick of it (I’m convinced that the topping would brighten up a bowl of butternut squash soup, too), I don’t want to jinx myself. Butternuts and I just found our footing again and, as good as this dish is, I think it’s best not to overdo it.

Although I originally made only half a recipe since I had only two baby butternut squash, I’m going to give you the full recipe, rather than the halved version. Feel free to cut the recipe in half though–you still get a lot of squash–or, as Madison suggests, use Delicata (it must be peeled!) if you prefer it to butternut.
I should mention that if you’re making a full recipe, you should be prepared to fry and steam the squash in two batches. You want to fry it in a single layer, so don’t crowd the pan. Also, be sure to look for a butternut with a long straight neck; this will give you the rounds that you want.

-Preheat oven to 400 F and lightly grease a large baking dish.
-Peel the neck of the squash and slice into rounds about 1/3 inch thick (NB If you’re using several small baby butternuts, you want to peel and use the whole squash). Then, cut the rounds into half.
-Heat the oil in a wide nonstick or cast-iron skillet. Add the squash in a single layer and cook over medium heat until golden (a few blackened bits will help the flavor), about 8-10 minutes, and then turn and brown the other side.
-When the squash is golden and the oil seems to dried up, add 1/3 cup water and cover the pan. Steam the squash until tender–you should be able to pierce it easily with a knife–about 10 minutes. Then, season with salt and pepper.
-Melt the butter in a small or medium-sized skillet over medium-low heat. Add the shallots and garlic and cook, stirring occasionally, (don’t let them brown!) for 5-7 minutes.
-Add the nuts, zest, herbs, dates and cinnamon and turn the heat up. Season with 1/2 teaspoon salt and a little bit of pepper.
-Cook for a few minutes, stirring often. Once the herbs have wilted a little, add the lemon juice, cook for an additional minute and then remove from heat.
-Arrange the squash rounds in the baking dish and sprinkle the date, nut and herb mixture over them.
-Pour 1/4 cup water over the squash and then bake for about 15 minutes; the topping should be barely crisped.

8 thoughts on “A Breath of Fresh Air”