Stay me with flagons, comfort me with apples: for I am sick of love. -The Song of Solomon
The last three weeks have passed quietly; in a way, things have been more calm and peaceful than ever. But beneath this calm, there has been a constant stream of change. After months of false starts, I finally started working and, although my job isn’t the most exciting or challenging one in the world, it’s still interesting work. More importantly, as I discovered after a few months without a paycheck, there’s something to be said for the simple pleasure of paying bills and having disposable income. I suppose you can also say that, after years of life in academia, I’m finally discovering the other side of the work force, the one that doesn’t define its self-worth and identity by what happens at work. It’s refreshing. Maybe there’s also something to be said for embracing a relatively stress-free life.
Of course, this doesn’t mean that, despite my claims to the contrary, I’m incapable of succumbing to the temptations of the academic life. I recently applied for a visiting part-time lecturer (don’t you love these titles? In academia, you could travel thousands of miles for a temporary position in a city known for cold and ruthless winters and still not earn the title of visiting–visiting–professor) position and last week they wanted to interview me for it over Skype. While I wish I could say that I was cool, calm and collected as the hour of the interview approached, the truth is that I was scribbling my thoughts down madly, looking over possible interview questions and generally feeling like a swarm of insects had settled in my stomach. And then, when it was time to put on my “academic face,” I realized that it wasn’t so much that I had missed academia, it was more that I was attempting to crawl back into my comfort zone. It doesn’t matter that I’ve been burned by academia more times than I can count (post-dissertation, even my dentist said he could perceive a change in my teeth; what, post-dissertation, does a girl have to grind her teeth about?), one can’t help but seek comfort in the familiar.

I don’t even know that I can really say how the interview went. There were questions that I could answer (“how would you teach x course?”) and questions that I stumbled on (“what was the theoretical apparatus of your dissertation?”) and largely because they just didn’t seem to apply to my largely historical work. But I can tell you this: any nostalgia I had been feeling for the academe quickly disappeared.
And it was strange, too. Immediately after this door seemingly slammed in my face, several others  opened. I recently had several responses to my tutoring ad and I’m now tutoring writing, literature and Russian. One of my students is even reading Fathers and Sons; it was as happy a coincidence as any. I also decided that I might as well ride this wave of change and do something drastic with my hair; watching the stylist cut off all of the ends (4 1/2 inches worth!) that I had split while worrying in front of a computer screen this summer gave me a renewed sense of freedom. I then spent the weekend reading about the difficulties that restaurant workers face (it’s an enlightening read, especially for those of us who try to eat ethically. Watch the book trailer) before returning to my book club for the first time in months. Somehow the combination of all of these things allowed me to feel that, for the first time in a long time, I’m finding my footing again. Finishing my dissertation was a disruption–a wonderful one, but a disruption all the same–to all the things that had defined my life in Berkeley. But now I see both the very real possibility and reality of a different, and definitely for me, happier, way of life.

After all of those heavy, serious thoughts, it might seem strange to transition to the world of apples, but it’s really not. While so many things have changed since our apple picking adventure, one thing that has remained a constant in my life is the presence of apples in my kitchen. Truly, besides the Greek, Elektra and a good book, apples have been my most steadfast companion. As it turns out, 18 pounds of apples can go a long way. You can make jelly and applesauce and lots and lots of pie (more pie than I often eat in a year has been consumed in the past month) and, still, there will be more apples waiting in the wings. But there’s really no need to despair; surplus is always a good thing, especially if you have both the time and the desire to be creative in the kitchen. For the sake of novelty, I decided that, rather than make yet another sweet with our apples, it was instead time for me to wade into the heretofore unexplored (at least by me) region of chutney making. And chutney, just to make sure we’re all on the same page, is a mixture of chopped fruit or vegetables (or both) that is typically cooked with vinegar, sugar and spices. 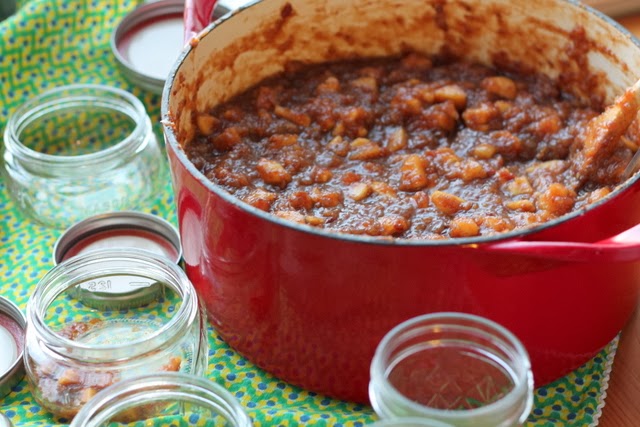 If I do so say so myself, I think that making chutney was one of the best decisions I’ve made all year. It showed me yet another side of preserving, which is developing into a real passion of mine. I love watching fresh ingredients transform themselves before my eyes–blueberries that turn into pools of indigo jam and how the pale yellowish inner skin of apples creates a deep amber when its juices are slowly boiled into jelly. There’s something so mysterious about the experience of standing over a pot of steaming, bubbling fruit in the kitchen and watching as its colors become more vivid. To me, it feels like a very earthy form of alchemy.
The particular chutney that I made, Teresa’s Date and Apple Chutney from Diana Henry’s Salt, Sugar, Smoke (the only word for this book is lush) is basically fall in a jar, from its spicy, sweet and somewhat tart flavor to its deep rusty color. I know that chutney isn’t nearly as big in America as it is in England or India, but after eating this with pork a few weeks ago and then again with chicken, I think I stumbled onto what may just become a pre-Thanksgiving ritual in my house: going apple picking so as to make apple date chutney to serve with the turkey on the big day. There are certainly worse traditions a girl could pick up in her thirtieth year of life. 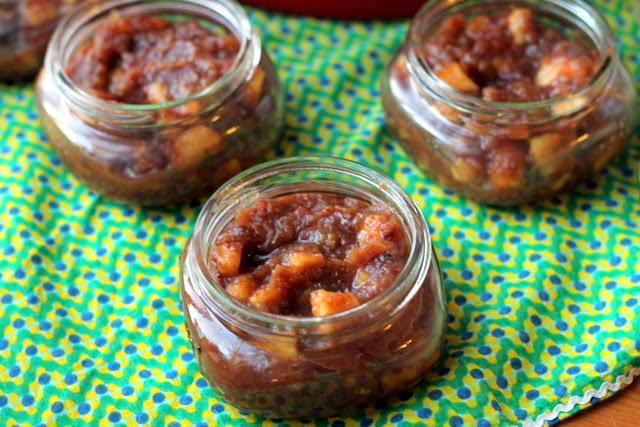 ever so slightly adapted from Diana Henry’s Salt, Sugar, Smoke
yields about 5 1/2 pints

Because this recipe calls for a few quintessential spices–ground ginger and cinnamon–I decided that a dash of nutmeg and a half teaspoon of cardamom would also make nice additions to the mix. I also opted to combine two types of dates–the more slender and slightly chewy Deglet Noor with the plump Medjool. I think I used more Deglet Noors than Medjools, but I think any combination or single type would work.

I should also add that, since I was new to making chutney, I wasn’t quite sure what to make of Diana Henry’s general chutney rule of thumb: “It is ready to put up when, if you drag your wooden spoon through it, a slight channel is formed that doesn’t immediately fill up…You want a moist chutney.” While she also says that the key to chutney is “long, slow cooking,” I found that my chutney was ready after about 2 hours, rather than the recommended 2 1/2 to 3. Since it passed the chutney rule of thumb, I decided not to risk things; I would say that this is the advice to follow, rather than a generalized cooking time.

One other thing I want to mention is that, although the original recipe promised only 2 pints of chutney, I ended up with more than double that. I don’t know if my chutney simply super-sized itself while cooking down (doubtful) or if this is a typo in the book, but it’s probably better to have more jars ready than too few. Another word of advice: since this recipe requires a lot of mincing, I think it’s a good idea to pull out the food processor, at least for the onions and the dates.

Finally, in terms of canning methods, Henry uses the water bath method, which I’ve never particularly cared for. I like to follow what has come to be known to me as the “Blue Chair Jam” method (I think I first read about it on Sweet Amandine, although it’s possible I learned about it from somewhere else): preheat the oven to 250 F and, when it’s ready, set your jars and lids on a baking sheet and slip it into the oven for 30 minutes. When the jam/chutney/jelly/ is ready, take the jars out and start spooning the preserves into the jars (if the preserves sizzle when they hit the bottom of the jar, stop and let the jars cool for a few minutes; otherwise, keep going), Then, after you’ve put the lids on the jars, put them back in the oven (again, at 250 F) for 15 minutes. And, voila, they’re processed!

-Preheat the oven to 250 and prepare your jars as outlined in the recipe notes above.
-Put all the ingredients into a stainless steel saucepan or a dutch oven, except for the sugar and half  the vinegar, and cook at medium heat, stirring often.
-Once the apples start to release their juices, adding moisture to the mixture, reduce the heat to low and let cook for an hour, or until everything is really soft.
-Add the sugar and the rest of the vinegar and then stir well. Continue to cook on low heat, stirring every so often, for another hour to two hours. The chutney should be dark, thick and very soft; when you can drag your wooden spoon through it and a slight channel forms and doesn’t immediately fill up, it will be ready.
-Remove from heat and spoon into the prepared jars; be sure to leave 1/2 inch headspace.
-Process the jars in the oven at 250 F for 15 minutes and then remove.
-Let cool and then label the jars.
-The flavor improves with age and Henry recommends that you wait to use the chutney until 2 weeks have passed. I’m more impatient, so we tried some that night. While I do see difference in the flavor, it’s still pretty good on that first night.
-Refrigerate after opening.

4 thoughts on “A Chutney Fit for Thanksgiving”