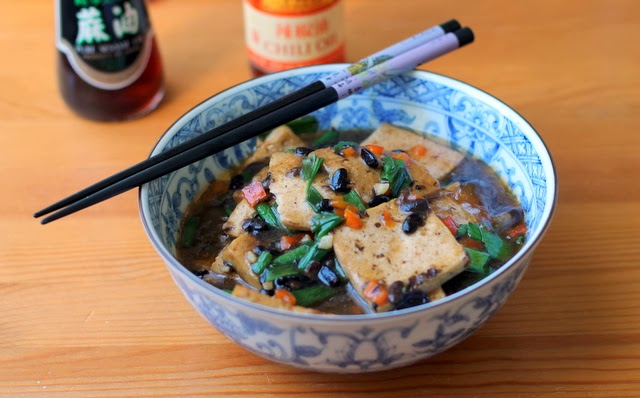 When people enter the kitchen, they often drag their childhood in with them. I was brought up on English children’s books, in which teatime and cottage life play an important role. These formed my earliest idea of comfort: a tea table in a cozy cottage. As an adult, I have reinforced these childhood notions by reading English cookbooks as if they were novels and rereading such classics as Consuming Passions by Philippa Pullar, An Englishman’s Food by Drummond and Wilbraham, as well as Food in England and Lost Country Life... -Laurie Colwin (Home Cooking: A Writer in the Kitchen)

Back in September, I was stir frying like it was going out of style. I’m not really sure what came over me, but suddenly I couldn’t get enough peanut oil, chopped vegetables and bowls of white rice. There were days when I would stir fry bok choy with rice vinegar, then finely chopped zucchini with garlic (the simplicity of this dish belies its astounding flavor; perhaps this is a testament to the transformative powers of peanut oil…) and, finally, a tofu dish with black beans. While it sometimes seemed like sheer madness to make that much food for two people, those were happy days, especially for our stomachs. When I look back, I blame the New York Times and its monthly “Recipe Lab” column, which was focusing on Fuchsia Dunlop. The picture of a wok full of steaming Gong Bao Chicken was enough to send anybody running to the kitchen. But, really, that’s only half of the story. The truth is that Fuchsia had long been a culinary hero of mine; it was because of her memoir, Shark’s Fin and Sichuan Pepper, that I discovered how easy it was to make Chinese food at home back in late 2008.

It’s true that, at first, I was a bit scared by all of the ingredients; working with potato flour was new to me, as was using black fermented beans and Shaoxing wine (Chinese rice wine). This was also long before I bought a wok in San Francisco’s Chinatown (even if Chinese food isn’t your thing, it’s a great tool for popping popcorn), so I also wasn’t sure how the recipes would turn out in a deep skillet. But it turned out that, while a wok is obviously preferable since it helps to cook things quickly, Chinese food could still not only be made, but also taste delicious without one. It didn’t hurt that Fuchsia is a wonderful guide to the Chinese kitchen; her recipes are clear and, for those who want to know more about what they’re eating, she provides historical information and cultural context in her cookbooks. I have both Land of Plenty and Revolutionary Chinese Cookbook; neither has ever disappointed me.
I don’t know why I gravitated towards Chinese food when I first started cooking seriously at home, but I suspect it’s because I’ve always longed for things that are different–that push me beyond myself and my experiences. At heart, I think I’m a person who enjoys escapism, whether in the form of novels, good TV or food that pushes against the boundaries of what my palate has known. That being said, I also oddly think that my interest in Chinese food could also be a matter of comfort: one of the first ethnic cuisines (besides Italian, which doesn’t count since my family is Italian) I ever tried was Chinese. While there weren’t many ethnic restaurants in southwestern Pennsylvania in the 90s (there are certainly more now, but still not that that many), surprisingly, there were several Chinese restaurants. It was always a treat when Grandma would bring me Chicken or Pork Lo Mein after getting her hair done (the restaurant was a few blocks from her salon), or when my best friend and I would have Chinese food either before or after some serious shopping at the mall. The first time I tried Indian food was in college and the same can be said for Thai, Vietnamese, Korean, Indian, Ethiopian, Japanese–and all the others. It’s strange think to look back on one’s culinary roots and to realize how limited they were, but I suppose the world was simply different then. 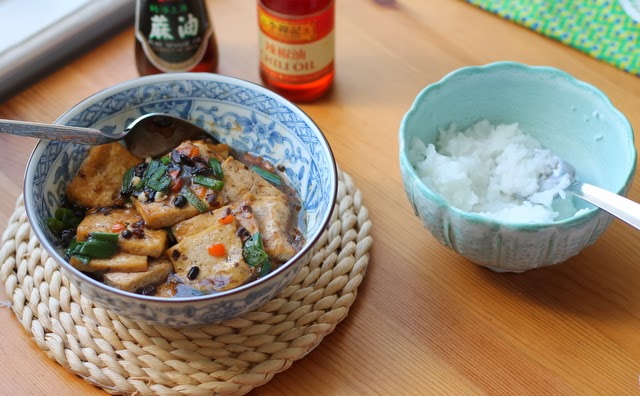 My tastes have changed a lot since my childhood. Now, when I think of Chinese food, I think of Dan Dan Noodles and Peng’s Home-Style Bean Curd. The latter is a true favorite of mine and one that the “Recipe Lab” column on Dunlop inspired me to make again. Peng’s Bean Curd is a Hunan (a province in southern central China; to put the importance of this province into context, Dunlop offers a simple analogy: Hunan is to China what Tuscany is to Italy) classic that pairs black beans with chiles and deep-fried tofu. I prefer making this dish with the recommended thinly sliced pork (a mere 3 ounces; while this may seem like too little to the Western palate, the pork is supposed to be a secondary ingredient here, not the star) since it adds depth of flavor to the sauce, but on a day when it seemed ridiculous to go to the butcher for such a small amount of pork, I made the dish without it and found that it was just as rich and flavorful. I love how the fermented black beans “perfume” this dish (you definitely smell it before you taste it, but it’s a tantalizing and inviting smell), as well as how the many flavors–spice, salt, fat–complement each other. It’s hearty and comforting all at once–and perhaps as good an introduction into the Chinese kitchen as any.
Peng’s Home-Style Bean Curd
Ever so slightly adapted from Fuchsia Dunlop’s Revolutionary Chinese Cookbook

When it comes to deep-frying techniques, I follow the advice of Kasma, the woman from whom I recently took an intensive Thai cooking class. She recommends that, rather than set the deep-fried food on a paper towel, that you instead put it in a strainer over a bowl. She said that this helps retain the crispy texture and I’ve found that this tip really makes a difference.
In the original recipe, Dunlop has you mix the 3 ounces sliced pork with the Shaoxing wine in a bowl. Because I didn’t want to lose the flavor of the Shaoxing wine when I made this without the pork, I added it and the black beans together.
Also, be careful after you add the potato flour; you don’t want the sauce to thicken too much.

-Cut the tofu into oblong slices, about 1/2 inch thick. Cut the scallion greens and chiles into thin diagonal slices.
-Heat the oil for deep-frying over a high flame until it reaches 350-400 F (you could also test to see if the oil is ready by dropping in a tiny piece of tofu and seeing if the oil sizzles). Add the tofu in 3 or 4 batches and fry until the slices are golden. Using a slotted spoon remove the tofu from the wok and place the fried slices in a strainer set over a bowl; this will catch the oil.
-Pour the oil used for deep frying into a container.
-Clean the wok, then reheat it over a high flame until smoke rises and then add about 3 tablespoons of the reserved oil and swirl it around.
-Add the garlic and chiles and let sizzle for a few seconds until fragrant.
-Throw in the black beans, stirring all the while.
-After a few minutes, pour in the stock, add the tofu and soy sauce and bring to a boil.
-Reduce the height and simmer for 5 to 10 minutes to let the flavor of the sauce penetrate the bean curd. If necessary, add salt to taste.
-Add the potato flour mixture and stir as the liquid thickens. Then, stir in the scallion greens. Remove from heat and stir in the chili (if using) and sesame oil and serve with rice.

8 thoughts on “Finding Comfort in Tofu”