Several weeks ago when I was reading Ruth Reichl’s Garlic and Sapphires, I discovered one of the most comforting meals you could ever have: Aushak, i.e. Afghan dumplings that are stuffed with scallions, served on a layer of garlic-spiked Greek yogurt and then topped with a gingery tomato sauce and roughly torn mint leaves. While everything about this description should tell you that this is comfort food at its finest, it is also, to be fair, a fussy dish–the kind that has you dirtying numerous pots and pans and carefully toiling over paper thin wonton wrappers and a bowl of finely chopped scallions. But if you’re the kind of person who likes tackling the occasional kitchen project, from fancy baked goods to classics like Julia Child’s Coq au Vin, Diana Kennedy’s Mole Negro or Thomas Keller’s butternut squash soup (according to the Essential New York Times Cookbook, this recipe can take anywhere from 8-10 hours of your life), this one is for you. 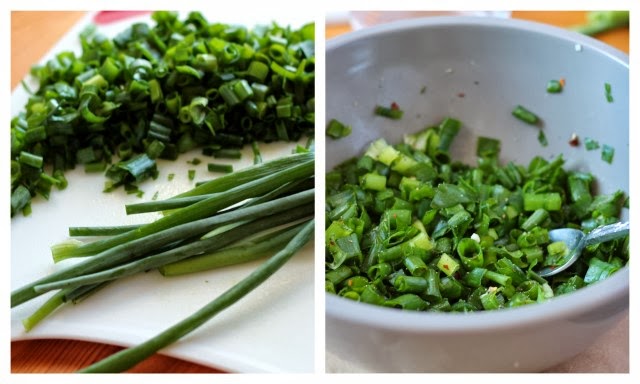 To be honest, I was supposed to write this post weeks ago, but then I got sidetracked. In part, by my own inertia; after all, looking for a job means you need to know what you want to do with your life and the weight of that question can be both frightening and intense. Then, there were also my occasional doubts about the whole enterprise of food blogging; photographing food is hard work and can take a lot of the pleasure out of eating. Beyond these existential issues, there was also the stuff of everyday life to take care of: job applications and a few interviews (the most interesting one took place at a local Berkeley cafe, where I had applied to be a cook. I have no shame in saying that, as soon as I stepped into a professional kitchen, I realized that it was not the place for me. I am a home cook and I want to keep it that way), dinners, birthdays, the development of a rather serious addiction to Scandal, an event with Jhumpa Lahiri in San Francisco, the successful writing of an academic cover letter and, finally, a bona fide job offer that will pay well, provide some benefits and be walking distance from home. And with this good news, I suddenly felt free and able to write again.

In addition to the welcome return of a routine and stability, I was also reminded of my need to write about aushak (or sometimes ashak) when I opened the latest issue of Saveur that arrived earlier this week. Staring up at me on a page devoted to the culinary gems of Dandelong, Australia, was a picture of incredibly photogenic leek dumplings with a sauce made of tomatoes and kidney beans–in short, the vegetarian equivalent of the aushak recipe I had found in Reichl’s book. When I had been describing this dish to a vegetarian friend, I had wondered what would generate enough juice and texture to stand in for the meat; my first instinct was mushrooms, but I like the sound of beans as well. I also think that leeks, which are my favorite allium, would be just as lovely, if not better than the scallions Reichl’s recipe called for. 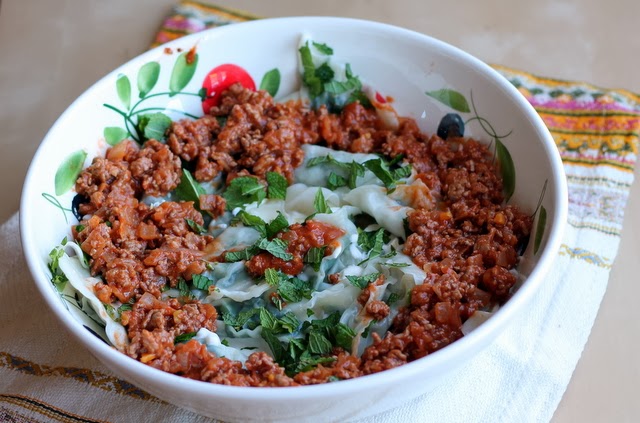 I was so intrigued by this dish that I did my homework on it. Although I always enjoy Reichl’s writing and descriptions of the many wonderful meals that she has eaten in her life, I felt that Craig Claiborne’s 1986 article on Afghan cuisine in the New York Times was ultimately more informative (also, it was interesting to see that despite Reichl’s suggestions to the contrary, the Times had already been visiting restaurants that deviated from the norm of fancy and French). The tidbit about the major culinary influences in Afghanistan–Pakistan, Iran, China and Russia–was fascinating to discover and, to a large extent, spoke to my own kitchen preferences and sensibilities. Putting the many pieces of this dish together, I felt like I could almost see how these different countries came to inspire aushak: from the mint (a Persian staple) to the ginger in the tomato sauce (this, to me, seemed a Pakistani touch). But rest assured that culinary history and influence aside, the real fun of aushak begins when you’re eating them.

If the promise of pillowy dumplings weren’t enough, the glory of this dish lies in the way the various ingredients work together to hit all the right notes. It’s got spice, it’s got tartness and it’s got texture.  If you’ve got a small chunk of time on your hands (or the kind of organizational skills that allow you to make the recipe over 1-2 days) and the desire to venture into a world cuisine that you maybe have yet to experience, aushak is a fine place to begin.
Aushak (Afghan Scallion Dumplings)
Yields 4 servings
Adapted, mainly in method, from Ruth Reichl’s Garlic and Sapphires
Whenever I follow recipes, I’m always surprised by how long recipe writers think it will take for onions to turn a golden brown. This step alone can easily add time to the cooking process. Here, Reichl says the onions for the tomato sauce will brown in 5 minutes; for me, this took closer to 10-15. This may seem like a small thing to point out, but the devil is truly in the details.
While I loved the finished product, I do think that, given the size of the bowl I used to serve the dumplings in, I should have doubled the yogurt sauce. Beyond this recipe, it never hurts to have extra garlicky yogurt around.
Also, whenever I work with wonton wrappers, I get a little worried. You have to be careful that there’s no air in the wrapper (run your finger from the center to the edges when you’re sealing them) and that they’ve been sealed tightly (make sure to dampen their edges). I usually have this irrational fear that that they’ll fall apart once they’re cooked and it’s time to drain them in a colander. Because of this, I usually remove mine from the pot using a slotted spoon, which just feels safer to me. Feel free to just pour them into a colander, but I do suggest that this be done with care.
For the meat sauce:
3 tablespoons vegetable oil
1 medium yellow onion, finely chopped
1/2 pound ground beef
1 clove garlic, minced or pressed
1 teaspoon ground coriander
1 teaspoon freshly grated ginger
1/2 cup water
2 tablespoons tomato paste
1/2 teaspoon salt (or to taste)
1/4 teaspoon pepper (or to taste)
-Heat the oil in a small skillet.
-Add the onion and cook until golden.
-Add the beef, garlic, coriander and ginger. Cook, continually stirring, until the meat is no longer red.
-Add the water and cook until it is reduced by half (roughly 5-8 minutes), stirring often.
-Add the tomato paste and, while stirring, cook for about 5 minutes.
-Season with salt and pepper and set aside. Sauce can be made ahead and stored in the refrigerator.
For the yogurt sauce:
1 cup full-fat Greek yogurt
1 tablespoon minced garlic
1/2 teaspoon salt (or to taste)
-Mix the yogurt, garlic and salt in a bowl and set aside.
For the dumplings:
2 bunches scallions, white part set aside, green tops finely chopped (should yield close to 2 cups)
1/2 teaspoon salt
1/2 teaspoon pepper
1 teaspoon red pepper flakes
1 teaspoon garlic, minced or pressed
25-30 wonton or Gyoza, round or square (if round, dumplings will be turned into semi-circles; if square, dumplings will be triangular)
-Combine the scallion tops, salt, pepper, red pepper flakes and garlic in a bowl. Stir to mix.
-Place a wonton wrapper on a flat surface and, using either a pastry brush or your finger, brush the edges with water.
-Spoon 1 teaspoon of the scallion mixture onto the center and fold the wrapper in half, making sure to run your finger over the filling to make sure that all the air has been removed. Then, seal the wrapper, pressing the edges tightly together.
-Repeat with the remaining wrappers.
-Heat about three quarts salted water in a 6- to 8-quart pot. Once it reaches boiling, add the dumplings and cook for about five minutes or until boiling.
-Either place the dumplings in a colander using a slotted spoon or carefully drain them in a colander.
Garnish:
2 teaspoons freshly chopped mint
-As the dumplings are draining, spoon the yogurt sauce into a large bowl.
-Once the dumplings have drained completely, place them on top of the yogurt layer.
-Then, if you have any additional yogurt sauce (I didn’t and I suggest you make twice the amount of yogurt listed above), spoon it on top of the dumplings.
-Spoon the meat sauce around the edges of the bowl, putting a small dollop in the center. Top with chopped mint and serve. Aushak is best served hot.

4 thoughts on “The Layered Flavors of Afghan Dumplings (Aushak)”