When I emerged from the train station into the city of Brussels this past summer, I was transfixed by  its old world beauty and the storybook quality that the Gothic architecture imparted to the landscape. Although a part of me felt that I had stumbled into some kind of magical kingdom of waffles, frites and endless displays of chocolate truffles, another part also knew that it wasn’t just the city that was suddenly helping me to feel different. Rather, it was my absolute certainty that, by having left Berkeley for my grand European adventure of 2013, I had crossed an important threshold. The life that I would eventually be returning to would look entirely different from the one I had left behind; in a way, Brussels was the first stop on my road to freedom,  one that, given its combined French and Dutch identity, aptly symbolized my own strange placement between the two very different mentalities of graduate student and non-student. 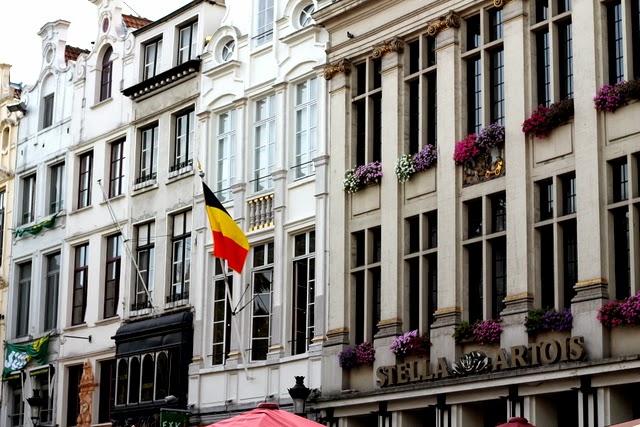 Fortunately that day, my non-student self was kicked into high gear. It didn’t matter that I hadn’t been sleeping well, that the body that had traveled from California to Brussels was nothing short of exhausted, that I had a charged laptop waiting for me back at the airport. I wanted to walk around and see everything. Work could wait; Brussels, after all, was my own personal limbo land, a place that I was only passing through.

We had only about 7 hours to explore, which might seem like too little time to really see anything, but Brussels is both a small and walkable city. Plus, for anything that we didn’t get to see or do, we also had the promise that, upon our return to the US, we would have another 4-5 hours to wander at our leisure. One of our first stops was the Grand Place (or the Grote Markt), the central square of Brussels; this square is the top tourist destination in Brussels and, given the splendor of the buildings, it’s hardly surprising. No matter where you stand in this square, your eyes are assailed by beautiful sights: baskets of flowers, ornate gilded buildings and turrets rising into the sky. 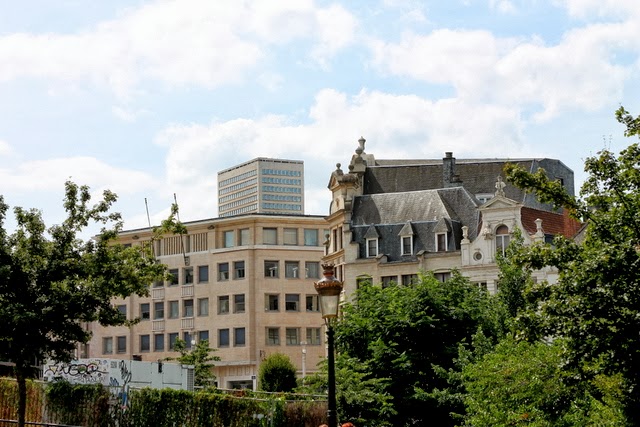 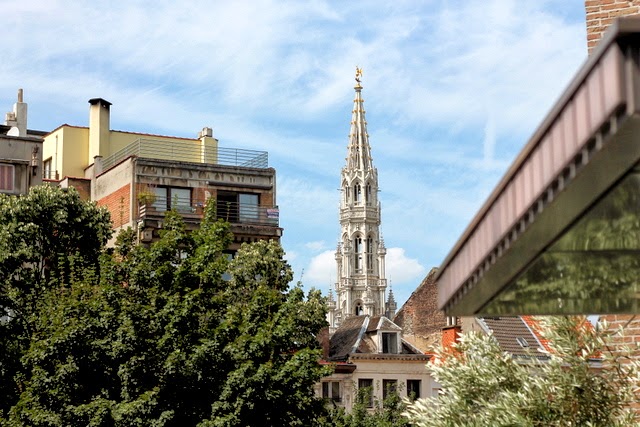 But even going beyond Grand Place, there are many gorgeous sights to behold. Throughout the city, the buildings are beautifully decorated; all you have to do is look up and you’ll find flowers, angelic women in flowing dresses and other patterns painted on buildings.

There were also so many interesting and colorful shapes spread throughout the city. By the metro, you’ll often find bright bursts of color that make you feel like you’ve gone straight from gothic to something both surreal and post-modern. One block later and you’ll often find yourself safely back in the old world charm of the city; even there, however, you’re still surrounded by a wide range of color. 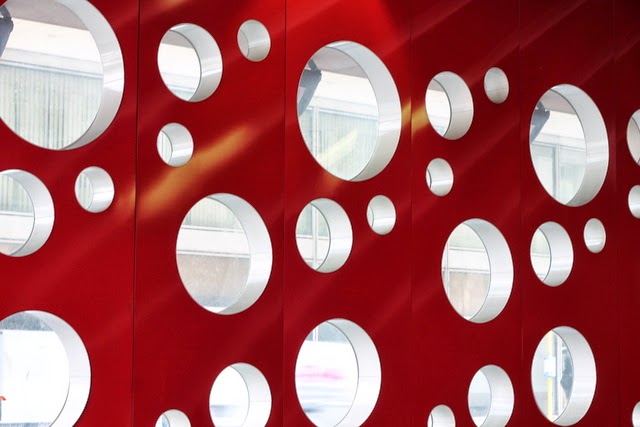 While I’ve never been much of a beer drinker (cider and ale are entirely different matters, though), I did find myself curious about the various offerings of Brussels. When the Greek and I finally sat down at an outdoor cafe, I was not only incredibly thirsty, but also famished. Looking around, I realized that, although the day was warm, few people were drinking water; despite my American love of water, I decided to attempt to blend in with the natives and other tourists. Since in Brussels, it seems like beer is considered water, I too would quench my thirst with beer. For me, a fruity Mort Subite (“sudden death”) seemed appropriate, while the Greek went for something a little stronger. 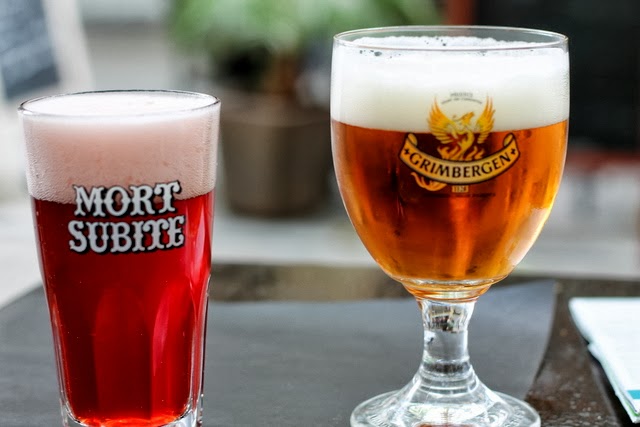 We also ordered some traditional Belgian dishes (I was pleased to see that, after many years of being dormant, my French was up to par–at least in terms of reading the menu; asking questions about and ordering the food was another matter entirely), or plats belges: cheesy croquettes to start and, for me, tomates crevettes (tomatoes with shrimp). While I really didn’t quite know what to expect from this dish besides some tomatoes served with shrimp, I was feeling adventurous. Not only that, but it seemed right to have something both traditional and seasonal. 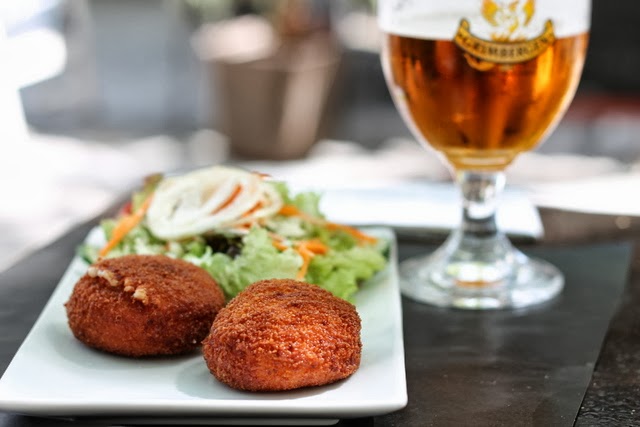 When I was served, I couldn’t have been more delighted. It turned out that tomates crevettes were essentially fresh tomatoes whose innards had been removed and were replaced by baby shrimp. On top was a more than ample dollop of mayonnaise, which might have sent some people running fearfully for the hills, but not me. The Russia and Japan years trained me to eat and relish unhealthy amounts of mayo…either that, or you learn to delicately and subtly scrape it off your plate and into a napkin. In Russia, however, do this at your own risk. Between all the lettuce on my plate and the shrimp that were cascading out of the tomato, I will confess that I was able to put most of the mayonnaise to good use. It was a really delicious and simple meal; everything on the plate was fresh except for the white asparagus (my first time ever trying it!) that was delicately pickled. 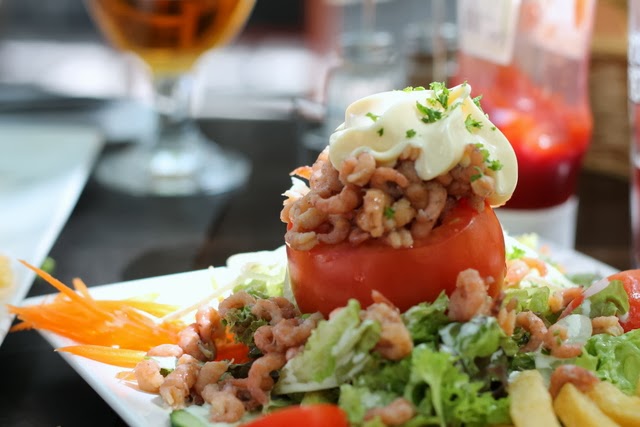 After such a feast, there wasn’t room for anything else, so only on our return to Brussels in late August did we get to have real Belgian waffles. For this visit, we met up with Vlad, a friend of the Greek who had come to Belgium to study from the Republic of Macedonia. Vlad claimed he knew the best waffle stand in town and I was willing to trust him. It turned out that the guy knew his stuff because it took me about 5 minutes to devour a waffle drizzled with chocolate and covered with whipped cream and strawberries and, in those 5 minutes, I experienced nothing but complete and utter joy.  Maybe it’s true that I was grossly sticky by the end of it all, but that’s a small price to pay for bliss. To get to this little stand where they perform waffle miracles, all you have to do is look for another famous Belgian landmark–the legendary statue of the little peeing boy (I don’t know Dutch, but I love that in this language this statue is called Manneken Pis) that stands on Rue de l’Étuve/Stoofstraat and Rue du Chêne/Eikstraat. Once there, it’s easy to see the throngs of people clustered around the waffle stand; if you still can’t see it, just look for the neon green version of the little peeing boy that wears sunglasses and is happily (or sedately?) eating a waffle. Other manifestations of this peeing boy have him splashed across Coca-Cola vending machines, cans and other mass-produced food products. This really fascinated me; it started to seem that, in Brussels, nothing whets the appetite more than the national symbol of a legendary peeing boy.

Once we left both food and national symbols aside, we got to explore one of Brussels’ most beautiful churches, the Notre Dame du Sablon built by the Guild of Crossbowmen in the fifteen and sixteenth centuries. Notre Dame du Sablon is known for its stained glass windows, which really are majestic. I don’t know the last time I’ve been in such a stunning church. While we definitely managed to see some of the highlights of Brussels, I do think the city deserves another visit in the future–one that will give me more time to sample chocolates, go into the city’s many churches and ponder the mystery of the peeing baby. I can’t help but feel that there’s a historical novel lurking in this symbol…unless it’s already been done.

2 thoughts on “A Walk Through Brussel/Bruxelles”