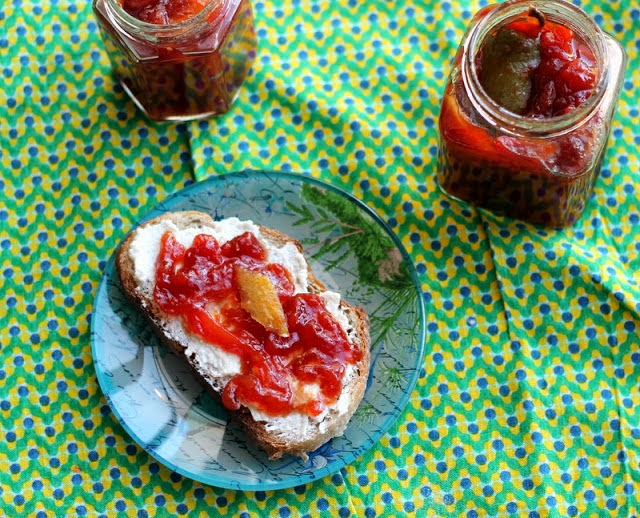 In this world where every object was thrown away at the slightest sign of breakage or aging, at the first dent or stain, and replaced with a new and perfect substitute, there was just one false note, one shadow: the moon. It wandered through the sky naked, corroded, and gray, more and more alien to the world down here, a hangover from a way of being that was now outdated. -Italo Calvino (“The Daughters of the Moon”)

These days I’m constantly reminded that summer is steadily fading away. The days are getting shorter, the blossoms that seemed so vibrant back in June have started to fade and there’s an almost but not quite imperceptible shift in the air. Even though in my last post I seemed resigned to “summer’s end,” I’ve recently been finding myself wanting to reach out my hand and grab onto it, imploring it to linger for just a little bit longer.

Considering that most of my summer was spent in a library, that most timeless of places where dust settles and the living and the dead settle in next to each other, my urge to suspend time–even if only momentarily–should come as no surprise. When I stop and think about it, this was my lost summer, or a season of activities that occurred in fits and starts. There were so many good moments–birthdays, graduation, Nashville, small celebrations and finally my great escape–but I also feel like so much passed me by. I didn’t even have my first cherry tomato until late July! This alone feels somehow criminal.

That I would one day care so much about cherry tomatoes, tomatoes and the like amazes me, and not because I couldn’t imagine a time when I would one day find myself so invested in the happenings in the kitchen. It’s more because as a child tomatoes were my foresworn enemy, the slimy, squishy seedy things that would go into salads and sometimes squirt juice out at you if you poked your fork in the wrong way. Even the smell bothered me. I didn’t know that a tomato that smelled like a tomato was the best kind of tomato; to me, its fruity, sweetly earthy scent was an insult to my senses. My dislike extended to tomato sauce (I was always more of a cream sauce kind of gal) and to ketchup; if it touched my French fries, you’d better believe that I was stubborn enough not to eat them.

But then one day, as these stories so often go, something changed. Big  piles of French fries on my plate became accompanied by puddles of ketchup; chunks of tomato made a salad complete. There was even a period in graduate school when, despite the fact that I knew better, I would buy the sad looking winter tomatoes that I just knew weren’t going to taste anything like a tomato, but that I couldn’t fathom not having there. My justification was that even a sad burst of color was better than no color at all. Fortunately, I gave this habit up in recent years; the disappointment had become too much for me.

This year, however, I decided to try something new after I saw a recipe for tomato marmalade that caught my eye. I liked the combination of tomatoes, cloves, a chili pepper or two, lemon and sugar; it seemed balanced and like the kind of thing I wouldn’t mind waking up to and eating on toasted cheesy bread. While it’s true that these wouldn’t be tomatoes fit for a salad, they would allow me to hold onto summer as tightly as I could for just a few more weeks. 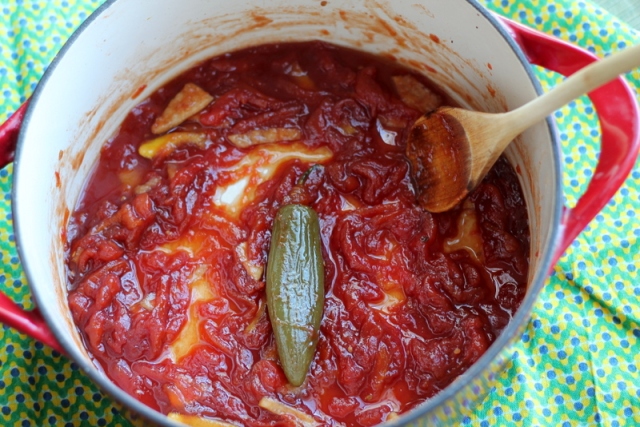 If that wasn’t enough of a reason to pull out and boil a couple of jars, I was doubly excited since this recipe would also allow me to continue to experiment with an ongoing food obsession of mine: canning, preserving and pickling. It all started over two years ago with that lemon class I took with INNA Jam and has continued with various spoon sweets (it’s becoming jujube season again!), turnip pickles and the like. After being tempted by some preserving posts this summer (one and two, both from butter tree), sampling lots of spoon sweets in Greece and making  Blueberry Jam along with the New York Time’s Recipe Lab with my grandparents in Pennsylvania (thanks to both a surprising and generous gift from my dissertation adviser, I have since bought the book), I was bitten by the preserving bug. So while the Greek watched Cal sail to football glory on Saturday afternoon, the dog and I settled into our own easy Saturday routine. She sprawled out on the floor to sunbathe (somebody has the life), while I set about peeling, seeding and thinly slices 2 1/2 pounds of tomatoes to the sound of Robert Coover reading a kind of crazy, but compelling story by Italo Calvino.

Believe me when I say that this was painstaking, yet pleasant labor; tomato seeds are slippery and have a way of ending up everywhere. Even though I was supposed to remove all of them, more than a few made their way into the jam. There was also a brief moment when I wondered what precisely I was supposed to do with the jalapeño pepper I was using, but then I decided that it was there for flavor only and that no more seeding needed to take place. But the few questions I had about the recipe aside, it was so exciting to watch the tomatoes cook down, to inhale their scent as they mingled with the other flavors and, finally, after a lengthy process, to be able to spoon a thick layer of the marmalade onto a piece of bread covered with ricotta cheese. Perhaps I’m just a huge food geek at heart or maybe I’m just easily delighted these days in my newly liberated and generally carefree state, but who wouldn’t be fascinated by tomato marmalade? It’s like a fancier version of ketchup, but please do hold the French fries.

Tomato Marmalade
slightly adapted from a Cook the Book column, which was featuring Domenica Marchetti’s new The Glorious Vegetables of Italy
yields 2 small jars (about 16-20 ounces of marmalade)
I should say here that because I decided to halve the recipe (the original recipe calls for 5 pounds of tomatoes), I opted only to sterilize the jars, not to process them in a water bath. I’ve been storing them in the refrigerator, since I don’t expect the jam to last all that long.
Also, as I mentioned above, I wasn’t really sure what I was supposed to do with the pepper: was I supposed to chop it? seed it? discard it at the end? The matter seemed complicated by my use of a rather chubby jalapeño when the original recipe called for 1-2 thin cayenne peppers. Despite the size of the jalapeño and the way I had to squeeze it into one of the jars, I couldn’t bring myself to discard it. I figured that a braver soul than I might want to slice the sweetened pepper on some toast. I imagine that, depending on your love of spice, you could incorporate the pepper in any way that you might like; I don’t think it should be skipped, though. A slight note of heat is welcome in this otherwise sweet and tangy marmalade.
Updated 9/27/13: About the peppers, I was just looking through an actual copy of Domenica’s book, and it seems that they are supposed to be minced. This would certainly spread the heat throughout the marmalade, rather than just flavoring it subtly. Depending on how hot you like it, you might want to seed the pepper(s).
2 1/2 pounds ripe plum tomatoes, washed
1 cup sugar (200 grams)
zest and juice of two small lemons + the peel of 1 of the lemons, cut into small pieces
1 tablespoon quality balsamic vinegar
1/2 teaspoon sea salt
4-5 whole cloves
1 fresh pepper (your choice), washed and/or left whole or seeded and sliced
1 bay leaf
-Preheat oven to 250 F and place a cookie sheet covered with parchment paper on the bottom rack.
-Wash two small jars (combined, the jars should hold about 16-20 ounces) and their lids and place them on the cookie sheet in the oven.  (Alternatively, you could skip this step and sterilize the jars and lids by placing them in a pot of boiling water for about 15 minutes.)
-Trim the stem from the tomatoes and, using either a vegetable peeler or a small knife, peel the skin from the tomatoes.
-Then, cut the tomatoes in half lengthwise and push out the seeds with your thumb (do this over the sink or into a small bowl). Cut the tomatoes in half again lengthwise and then cut each quarter into 3-4 small pieces.
-Put the tomato pieces in a dutch oven or a heavy-bottomed nonreactive saucepan.
-Add the sugar, lemon juice, zest and peel, balsamic vinegar, sea salt, cloves, pepper and bay leaf to the pot with the tomatoes.
-Place the pot on the stove over medium heat and bring to a simmer. Continue to let simmer for 45 to 1 hour, stirring often so that the marmalade doesn’t burn. Once the marmalade looks glossy and has thickened to a spreadable consistency, remove from heat and then carefully remove the bay leaf and cloves.
-Using tongs and a pot holder, spoon the marmalade into the hot jars and screw the lids on. Let cool to room temperature and then place in the refrigerator for storage.

2 thoughts on “As Tightly as I Can”