I can’t even describe to you how hard I fell for Nashville when I was there about a month ago. The city was gorgeous, lush, green, vibrant–my camera lens and I almost didn’t know where to turn first. I’ll admit that each time I go to to the south, I’m easily charmed and and pretty much ready to move in. I scout for apartments and envision how I would live as a local. This happened in Louisville a few summers ago and again in New Orleans in the fall; maybe it’s the slow pace of the south that attracts me–in such a sticky, cloying heat, things can’t help but be a little more relaxed–or maybe I just relish the fact that even though I’m still in the USA, I feel like I’m somewhere exotic, different and new. Whatever the cause, I can’t help but love Southern Gothic architecture, wrap-around porches, magnolia blossoms and the combination of honky-tonk meets Southern charm. And, although it may seem strange to those of you now suffering through the heat and humidity of an east coast summer, I love the heat. The Bay Area can give me many things, but the ability to walk around in flowing skirts and tank tops past 6 p.m. is not one of them.
Although we were there for only about a day and a half, we managed to squeeze quite a lot into our Nashville trip. Because we were staying at the cozy Daisy Hill B&B, we were in a prime location for two very important things: 1) eating breakfast at the pancake house to beat all pancake houses, the Pancake Pantry and 2) exploring Vanderbilt’s sprawling campus. Neither disappointed. The Pantry was everything the internet had promised it would be; the Sweet Potato Pancakes embodied sweet, fluffy pancake perfection (no hyperbole here; just the simple truth). I also really loved the decor of the place, from the paintings depicting stacks of pancakes to the waitress from a different era who is standing next to a mountain of butter. Is it just me or could this be a symbol of the culinary south? 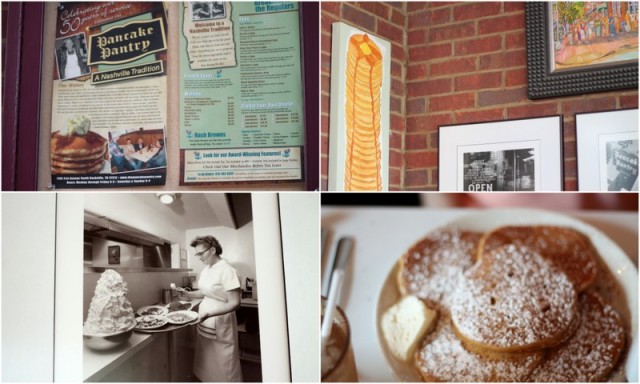 Vanderbilt was incredibly picturesque, the vision of a campus in bloom. We even stumbled upon a small patch of wild strawberries near the library. 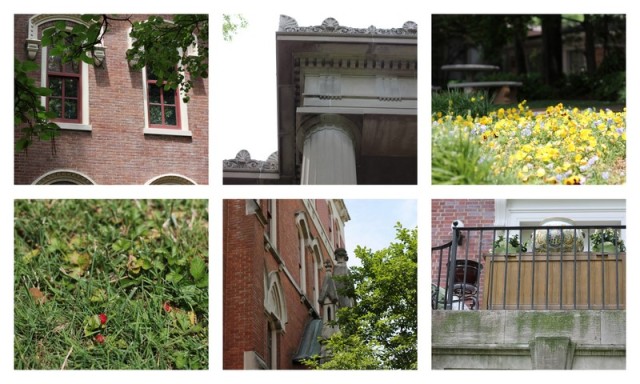 I wish I could say that, after our long walk in the heat, we were hungry enough to try one of Nashville’s most popular food trucks–The Grilled Cheeserie–but either fortunately or unfortunately the Pancake Pantry had done a remarkable job of taking care of our red-eye famished selves. I did, however, feel that I had enough hunger still in me for an iced tea and a macaron flavored with Whisper Creek, or, as they call it in Tennessee, cream-based whiskey. 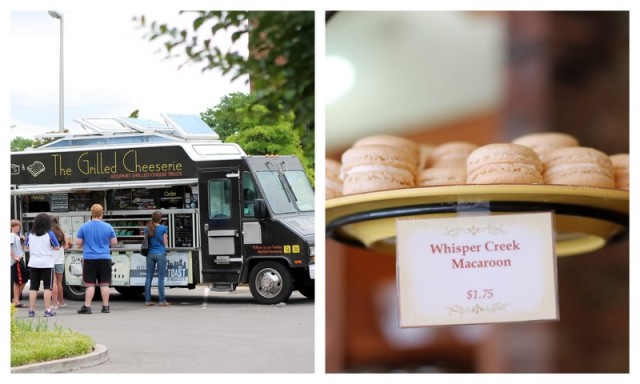 Even with both caffeine and sugar in my system, I knew I wouldn’t be able to stay up much longer. Once the thunder started grumbling, the Greek and I felt that we were justified in going back to the bed and breakfast for a nap. Before falling asleep though, I wanted to settle the matter of dinner; after a morning of pure sugar, I wanted vegetables and the promise of something (bordering on) healthy. Although known for its Sunday brunch, I settled on  Marche Artisan Foods in East Nashville. This decision was partly strategic: I knew that, no matter where we ate, the Greek and I would be having dessert at Jeni’s Splendid Ice Creams. And, after a lovely, hearty meal that offered the best of local Nashville produce, that’s just what we did.

Before leaving for eastern Tennessee, we explored the downtown a little, walking by the beautiful Nashville Symphony (the treble clefs in the image below are bike racks; it’s these tiny details that made me smitten with this city. Everything is so carefully planned and manicured) and heading to the Country Music Hall of Fame. While I can’t say that I’m a fan of country music giants like Garth Brooks and Carrie Underwood, I do love the sounds of old(er) country–from Patsy Cline to Kenny Rogers. This is the music that my grandpap and grandma listened to and I guess their love of it was passed down to me. 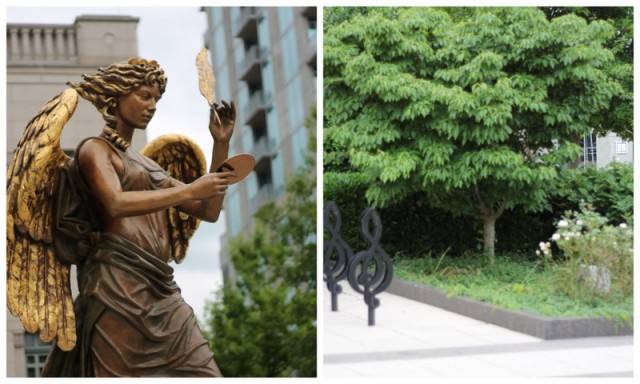 And, of course, a trip to Nashville (or the south) wouldn’t be complete without southern BBQ, so we stopped by Jack’s for lunch. I went for the pulled pork, mac & cheese and green beans, while the Greek went for the St. Louis style ribs. Needless to say, we were both pleased with our choices. The only thing I regretted after the meal was that I hadn’t gotten a slice of pie for the road. Jack’s served two kinds, chess and chocolate, and, feeling overwhelmed by the contents of my plate, I resisted the temptation. But once we were en route to Kingston, I got a serious craving for pie; I blame my being in the south (I think of the south as pie, rather than cake country, but really it’s just a place that celebrates sugar in all forms); I just had to have it. Fortunately, my craving hit right around the time we were passing Algood, a tiny town that is home to an amazing, yet somewhat eclectic pie and furniture shop: Algood Blue House Bakery and 2 Sisters Blue House Primitives. Personally, I wanted to get the whole chess pie, but the Greek, who was feeling a little more practical, suggested we go for the two mini-chocolate meringue pies. These little pies were everything you could want in a pie, but we didn’t discover that until the next day.

Once we got to Kingston, we were pretty busy with wedding stuff; not only that, but we were well fed by the wedding. There was dinner and dancing the Friday we arrived and on Saturday afternoon there was a Southern bbq on the lawn of the Whitestone Inn. Since I pretty much live and cook like a vegetarian (with only occasional forays into meat), I couldn’t imagine eating more meat after the meat fest that I had in Nashville with both pork chops and pulled pork. I was meat-ed out; all I wanted for myself was a vegetable and fruit bath. In part I got my wish; there were a lot of options at the luncheon. I was able to eat my weight in fruit and quinoa at the bbq, while the Greek had no problem eating both his and my share of the pulled pork.

After lunch, we had some time to explore the vast grounds of the inn. We discovered that it’s not just a bed and breakfast, but a farm as well. There were blueberries, livestock and a big red barn. My favorite thing was the swing, though. Family lore tells that only two things could calm me as a baby: peanut butter chocolate confections and the swing in my grandparents’ backyard. Finding this swing in the inn’s backyard, I never wanted to leave. 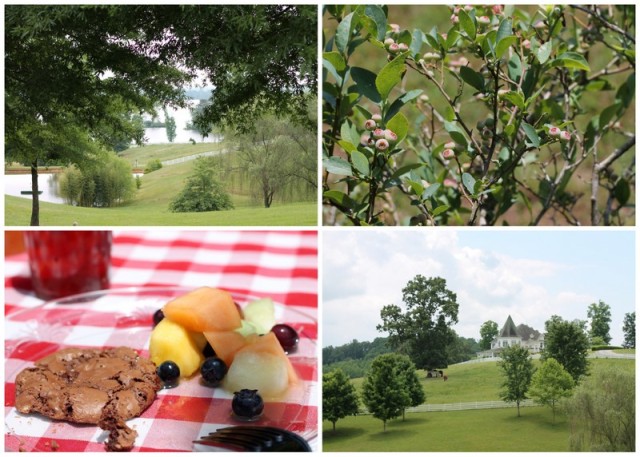 But since there were tasks to be completed (the Greek needed a haircut and I needed to find a local Walgreens to buy the appropriate things to complete my look) pie to be eaten and a wedding to attend, I gave up my spot on the swing. And as happy as I was on the swing, the pie was definitely worth it. I’m not always a pie person, but this buttery crust and creamy chocolate really made me savor each and every bite. In an ideal world, I would have come back to California and recreated these pies for this post, but alas the world is not ideal: dissertations and deadlines exist in it. Such fantasies will have to wait.

Come evening, the wedding itself offered more opportunities for delicious southern desserts and gorgeous Southern country scenery. While I’ve been to many nice weddings over the years, few can compare to this one in terms of location. The chapel was on a hill next to the lake and, since there was a thunderstorm during the ceremony (a sign of good luck!), everything was hazy and given a magical quality. While I don’t always post “personal” pictures on this blog, everybody looked so nice in their wedding finery that I can’t resist. Rules, after all, were meant to be broken, right?

Now I’m just looking for another excuse to return. I’ve got my eye on some personalized cowgirl boots and a craving for some more Blue House pie–not to mention a hankering for the green lushness of the south. I do love the city, but I may just be a country girl at heart. 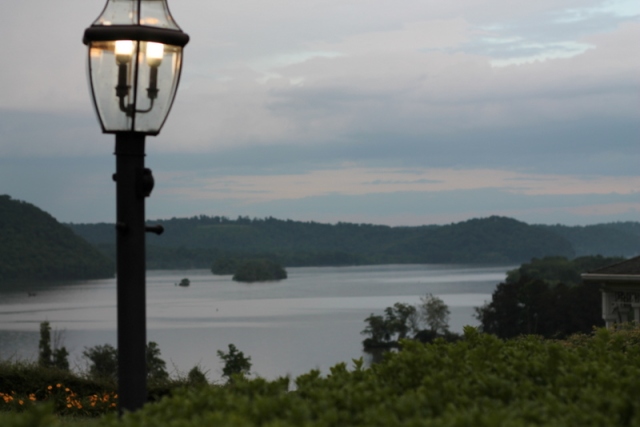 7 thoughts on “Nashville and the Tastes of Tennessee”