This isn’t the post I thought I’d be writing this weekend. Really, in a way, this isn’t a post that I thought I’d ever be writing unless I somehow managed–miraculously, amazingly, brilliantly–to concoct the cocktail of my dreams. But believe me when I say that I’ve found it. It’s a Peanut Torito: peanut butter and sugar combined with rum, ice and lime. Or, in other words, my desert-island drink, my cocktail husband and maybe the only thing I’ll be drinking until the end of my days. If this sounds hyperbolic, maybe it kind of is, but, truth be told, I’m not convinced.

If you, like me, had never heard of a torito until this moment, consider yourself in for a treat. A torito is Mexican chilled drink (from the Veracruzana region) that can combine fruit or other flavors with sugar, lime and rum (or pisco). I discovered the recipe when, earlier this past week, the last two cookbooks I had ordered for myself—I should note that this order took place before the clock struck 12 on January 1 and the Great Cookbook Drought of 2013 began (Ripe and Tacos, Tortas and Tamales)–arrived. When I opened the latter, I found myself staring at a cocktail recipe that featured peanut butter. I knew it wouldn’t be long before I found an excuse to try it. And then fate stepped in to help things along when my blog was featured in this lovely line up of January treats and I saw a recipe for tacos with sweet potatoes, which we’re currently swimming in thanks to our CSA box…The rest, as they say, was history. 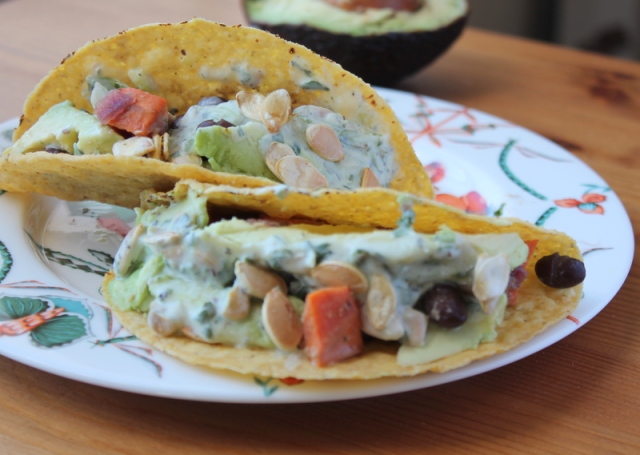 If the torito had appealed to me on paper, after my first sip, it appealed to me all the more. Even without the presence of any kind of milk or cream, the blended peanut butter becomes frothy and creamy–think almond milk, but with peanuts, or something almost like a milkshake, but with a thinner texture. And, despite my reservations about combining peanut butter and lime, the lime provided a welcome tangy note, which suited the rum.
Although it’s perhaps embarrassing to admit this, I had myself a little Peanut Torito on Thursday afternoon during my dissertation writing lunch break. There’s a reason, you know, that most writers enjoy their alcoholic beverages. Besides my absolute enjoyment of a lovely interlude, the torito definitely got the writing engine moving. Fortunately or unfortunately, this won’t become a habit, although it might definitely make for a frequent weekend treat.
And I should add that, for anybody wanting to know more about Mexican food–savory and sweet–this book, although fairly slim, offers a great selection of recipes–from strawberry tamales to pecan-chipotle salsa. Needless to say, they definitely expand your understanding of the Mexican kitchen. But all of these innovations aside, I was mainly inspired to buy it because it’s largely about street food and street food is easy; for the next few months, I’m generally going to be all about easy.

Peanut Torito
Yields about 3 servings (depending on the size of your glasses)
Ever so slightly adapted from Roberto Santibañez’s Tacos, Tortas and Tamales (with J.J. Goode)

Besides cutting the recipe down to serve two (Thursday’s decadent lunch portion consisted of the leftovers), the Greek and I decided to zest the lime instead of serving it in wide strips as the recipe suggested. Personally, I think this leads to a stronger lime flavor. Also, although I know the importance of using canela (Mexican cinnamon or Ceylon cinnamon) instead of the Saigon cinnamon (cassia, i.e. the type that is most commonly sold and used in the States) when preparing Mexican dishes, all I had was Saigon cinnamon, so I used that. For me, the flavors worked; I liked the additional spice (if you’re interested, you can read about the differences here, but, in a nutshell, the former is subtle and more aligned with vanilla-y notes, while the latter is both bold and spicy).

1/4 cup of creamy peanut butter (I used the natural kind, making sure that it was mixed well)
2 tablespoons sugar
dash of salt
1/2 teaspoon cinnamon (Saigon or Ceylon; you can choose); plus more for garnish
1 1/4 cup water
1/3 cup rum (we used Bacardi Gold)
zest of half a lime
Ice cubes

-Combine the peanut butter, sugar, cinnamon, salt and water in a blender.
-Blend until smooth, about half a minute.
-Add the rum and stir well.
-Pour into ice-filled glasses and sprinkle on both lime zest and an additional dash of cinnamon.
-Enjoy!

-If you have leftovers, make sure to stir them well; the peanut butter tends to sink to the bottom and needs to be reintegrated into the drink.