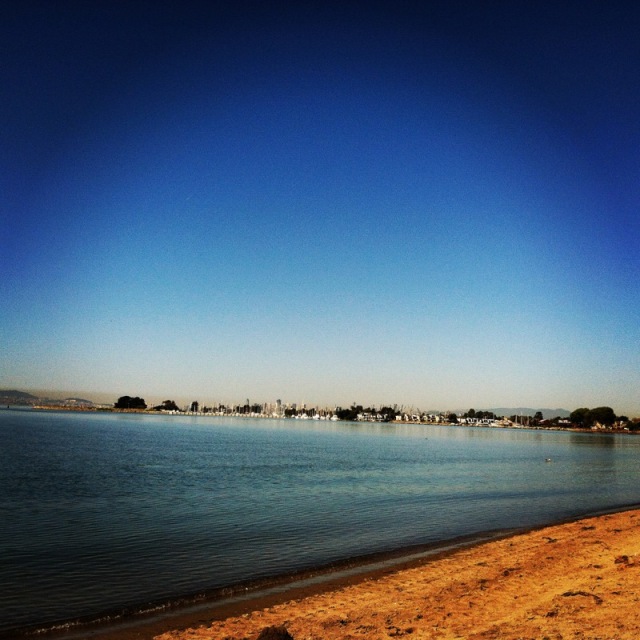 Granted, granted I’m a babbler, a harmless, irksome babbler, as we all are. But what’s to be done if the sole and express purpose of every intelligent man is babble–that is, a deliberate pouring from empty into void. -Dostoevsky (Notes from the Underground)
It’s been a strange week, dear readers. Strange, strange, strange.
It all started on Tuesday, when the Greek and I stopped at the beach with Elektra on our way to the airport to pick up my mom and aunt.  It was so weird for us to be doing this completely atypical thing on a Tuesday morning. But it was worthwhile. Ellie loved the beach (at heart, I think she’s Greek), although she was a little afraid of the water and stayed close to the shore. 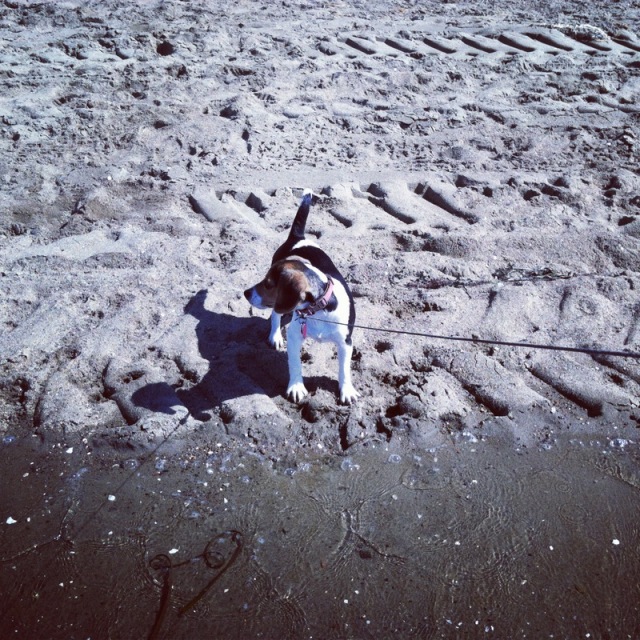 Then, later that night, about an hour after falling asleep, I woke up to fire trucks and ambulances outside my window. Because of the heat wave that was attacking the Bay Area at the beginning of the week, it was wide open and the noise, as well as the fear that something was desperately wrong, drew me from the comfort of my bed. It turned out that a house on the next street was on fire and it was a horrific thing to witness–flames billowing up into the sky, thick waves of smoke, firefighters trying to open fire hydrants and people running up and down the street and yelling. You know that these things can happen and that they do happen, but it’s so humbling to see it take place in your neighborhood, to have it happen to people that maybe you don’t really know, but you’ve seen them pruning flowers in their front yard or walking their dog. Fortunately, nobody was hurt; the family escaped the house and, although it took the firemen a long time to put the fire out, there was no breeze to help it spread.
In such moments, normalcy shatters and you wonder why we spend our days concerned with such silly, inconsequential things when each moment really is precious. It made me think that I need to try–despite the stress and pressure that I can’t help but feel as I try to finish my dissertation–to remember to focus on the positive, to look for things to be grateful for everyday. Because reasons to be grateful are there in abundance. I just can’t close my eyes to them.
Here are some of mine from the past week:
For my mom’s arrival I made the Caramelized Garlic Tart from Ottolenghi’s Plenty. This is not the first time I’ve made this tart (it was a pre-Finland treat for me and the Greek back in February), but, even the second time around, I can’t help but marvel at how the garlic caramelizes with the help of the balsamic vinegar and some sugar. Not to mention how good the sweetened garlic tastes when paired with goat cheese and creme fraiche. Best of all, my mom loved it, which is just what I was hoping for. 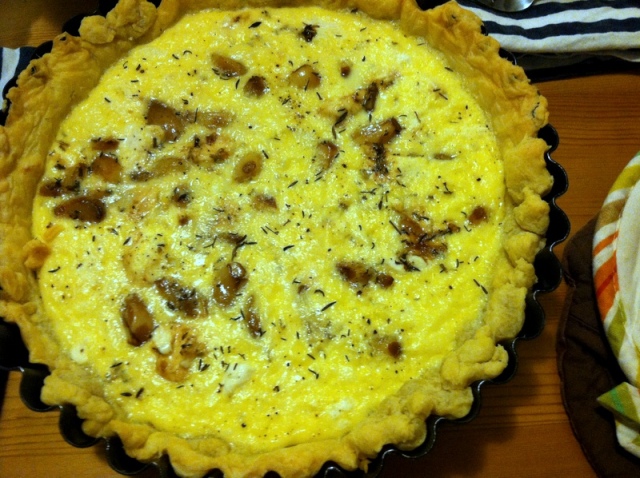 I also got to make the Puddingy Plum Cake that I mentioned in my last “underground” post, which was incredibly moist with bits of collapsed and jammy plums in each bite. Making it, I loved watching as the brown sugar, butter and golden syrup melted together. The finished product, especially when paired with ice cream, wasn’t so bad either (irony alert; we happily gobbled that cake up quickly). 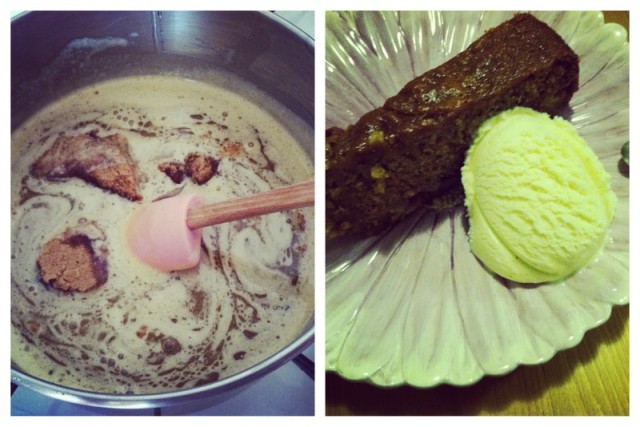 The next night, we went to the Zuni Cafe, which seemed like the best kind of place to take visitors to San Francisco. It’s a quintessential part of the city’s culinary landscape and one of the birthplaces of California cuisine. I had gone there last year with a friend and, needless to say, one visit had hardly exhausted my curiosity. We had a really nice and relaxing time; my mom and aunt enjoyed all of their food, from the appetizers to the dessert. The Greek and I also left more than satisfied. Bucatini and ambiance are sometimes all that one needs in life. 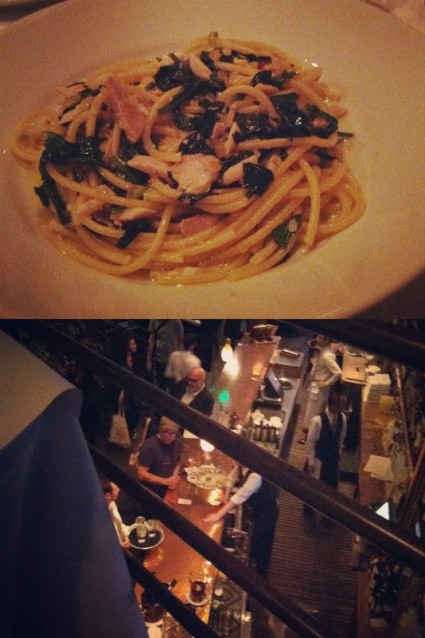 Given all the good food we’ve been eating, I’ve felt a little sorry for the pupster, who clearly doesn’t get to accompany us on these culinary adventures. I did have the idea, while flipping through a pet magazine at the vet, to make her some chicken jerky. What can I say? I love my puppy enough to cook for her and, since chocolate cupcakes are off limits, I can at least keep this in mind for a birthday or holiday treat (and wouldn’t it make a good gift for other dog owners?). 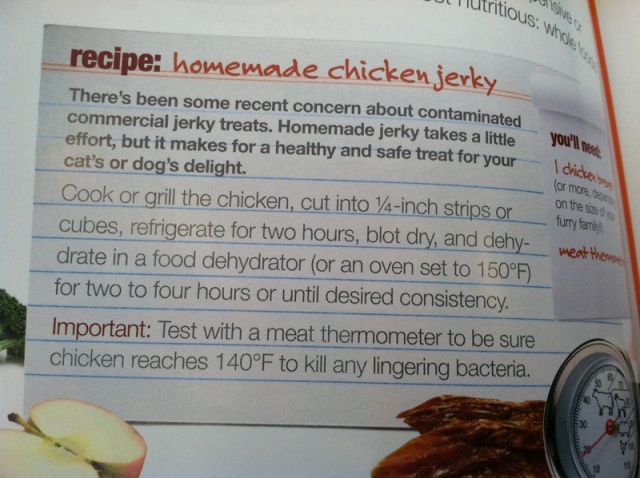 Last but not least, there was this beautiful loaf of cheddar bread, adapted from Artisan Bread in 5 Minutes a Day. It had reach and crunch and emitted that winning hollow sound when its bottom was knocked upon. The other three loaves (the recipe yields four), however, fell flat–literally. I’m debating about whether to blog about this because it was a failure, but, you know, these things happen to all cooks and there are lessons to be learned here. For me, the lesson is mainly that I’m abandoning the no-knead method (this loaf, in fact, was kneaded and, when compared with the other loaves, tells me everything I need to know about making successful bread). Maybe it works for some people, but I don’t think it does it for me. Maybe it’s a climate thing and the Bay Area just isn’t up to the challenge? In any case, considering the great taste of this bread, I think I’ll be making a similar loaf very soon, so expect cheddar bread in the near future. 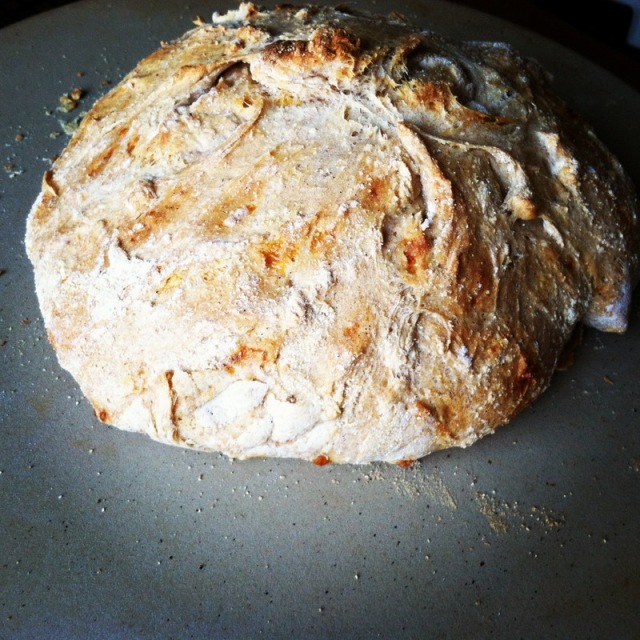 But, before bread, there will be leeks. And before leeks, lots and lots of grading. And enjoying the weekend with my mom, aunt and the Greek.
Until Monday or Tuesday. Happy weekend!

2 thoughts on “Notes from the Underground: Week 3”