The house is silent when Marietta has left and Mrs. Lethwes feels free again. The day is hers now, until the evening. She can go from room to room in stockinged feet and let the telephone ring unanswered. She can watch, if the mood takes her, some old black-and-white film on the television, an English one, for she likes those best, pretty girls’ voices from the nineteen-forties, Michael Wilding young again, Ann Todd. -William Trevor (“A Day“)
For me, Wednesday afternoon is a time of liberation. Not only do I have two out of my three weekly classes under my belt, but I also know that the most difficult part of my work week is over. Come Thursday, there are no more meetings to attend, no conversation classes to prepare for and just one more library shift to sit through. It’s a glorious feeling and one that I relish.

I usually leave campus on Wednesday afternoons feeling nothing but exhausted; once I get home, however, I’m suddenly full of energy and of ideas about how I should spend the rest of the day. Granted, despite my best efforts, I’ve discovered that this simply isn’t a time for writing my dissertation. My brain is sadly too tired for that and the words just don’t come, which is why, in the hopes of refueling my work ethic for the remainder of the week, I instead allow myself to get creative in the kitchen. 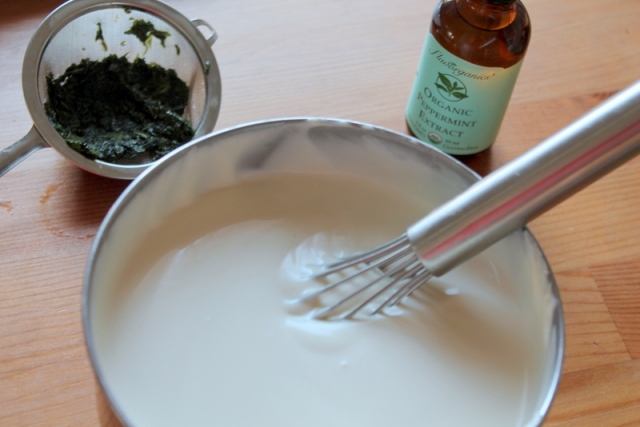 Last week, my creativity took a surprising turn. You’ve all heard me say on this blog–many times, in fact–that I absolutely, positively despise mint. And while I’d hardly call myself a liar, there are simply moments in life when you find a way of preparing an ingredient that you formerly believed you hated. It doesn’t have to mean that you’re now the ingredient’s biggest fan, or even that in, 9 out 10 cases, you’d suddenly want to eat it; all it means is that you have found a small way to make peace. It should come as no surprise that ice cream (frozen yogurt, really, but this is a minor point) served as the mediator in my complicated relationship with mint.

It all started when I began hearing the buzz about The Sprouted Kitchen cookbook (the product of the eponymous blog); this wasn’t a blog that I had actively followed, or even one that was on my distant radar, but, reading about Sara’s recipes and cooking philosophy, I found myself more than a little curious about what the cookbook had to offer. Given my constant (and probably compulsive) need to “reward” myself for work done and projects completed, I decided to order it. And ever since it arrived early last week, I’ve been cooking from it and marveling not only at the results, but at its simple and creative recipes. Even the Greek, who, upon seeing yet another cookbook on our kitchen table, voiced the thought that this just might have been an unnecessary purchase, has come around to the fact that this book has a lot to offer. I can’t tell what convinced him, either: the mango lassi we had with a batch of lentils, the grapefruit margaritas we made to celebrate the weekend, or the flourless chocolate-banana pudding cakes with cinnamon (and, because I’m a woman obsessed, peanut butter) cream?

I strongly suspect, however, that it was the mint chip frozen yogurt that I decided to make on a whim. This is a flavor combination that I’ve always been sorry I really didn’t care for–mint chocolate chip is one of the 10 most popular ice cream flavors; who, after all, doesn’t love chocolate mixed with anything?–and I really liked the sound of Sara’s recipe. It combines Greek yogurt, heavy cream, a natural sweetener (she uses brown rice syrup, but I used honey) and two types of mint–peppermint extract and fresh mint leaves. Given the fact that I can more than tolerate mojitos with their muddled mint leaves and what’s often disturbed me about all things mint is the bright green color that seems nothing but artificial, Sara’s recipe seemed to take the best of the mint world and turn it into a sweetened herbal treat. 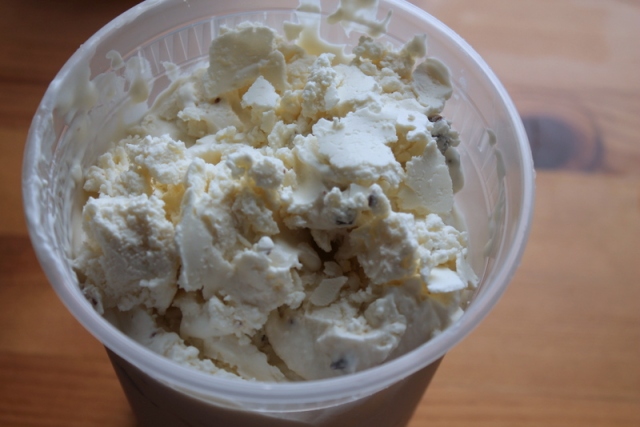 Still, I felt I couldn’t take any unnecessary chances. I wanted the mint flavor to be soft–present, but muted–so I cut back on both the fresh mint leaves and on the peppermint extract. I also decided to use milk chocolate instead of dark since I wanted the ice cream to be noticeably sweet. And, after churning this early on Thursday morning (clearly, I have the right priorities) and sampling a spoonful, I knew I had hit the right balance: I had finally found a mint chip ice cream (mint chip for mint haters) that I could see myself eating again and again.
How’s that for a productive Wednesday afternoon?

-Coarsely chop the mint leaves and put them in a small saucepan with the heavy cream.
-Bring to a simmer over medium heat, stirring occasionally.
-As soon as the mixture comes to a simmer, stir in the honey and then turn off the heat; let steep for half an hour.
-Pour the cream mixture into a medium-sized bowl, using a fine-mesh sieve to catch the mint leaves (I used a tea strainer, which, given the amount of fresh mint that I used, worked nicely).
-Add the peppermint extract and yogurt to the cream, whisking to combine; be sure to whisk until smooth.
-Cover and let chill in the refrigerator for as little as 1 hour or as long as overnight.
-Churn the yogurt mixture in an ice cream maker according to the manufacturer’s instructions.
-Once the yogurt has thickened, stir in the chopped chocolate.
-Scoop the churned yogurt into a container and store in the freezer. Let freeze for at least 1 hour before attempting to serve. Before serving, you may want to let the mixture sit on the counter for a quarter of an hour; otherwise, it’s hard to scoop.

7 thoughts on “Turning Over a Minty Leaf”