Call me impossibly stubborn, but I’m having a really hard time letting go of summer. I long for the slow pace of the days, the lack of (senseless) meetings, the ability to sleep in–even if just until 8:30 a.m. (yes, things are now so dire that this seems like the epitome of living large).  Of course, there were days this past summer when I was ten shades of miserable–mainly, when I didn’t feel like I was producing anything and that I would maybe never finish my dissertation. These were the moments when I was longing for the semester to begin so that my life would have some kind of structure. Now that the semester is here, however, I feel exactly the opposite (fact: humans are nothing if not contrary creatures). What it comes down to is that I’m not sure I’m all that crazy about my academic year self; I’m not sure it brings out “my best me” (whatever that really means). So, in an attempt to recapture some of the magic of the summer and remnants of a self that didn’t feel so scattered and worried about having time and energy for all the things that the academic lifestyle demands, I recently took a walk down summer photo lane as captured by my iPhone. Truth be told, as much as I love my camera, the iPhone is sometimes just more convenient; not only is it both lighter and omnipresent, but it’s also much more discreet. And I’d be a liar if I didn’t say that, as much as I love taking pictures with the sunshine streaming through my kitchen windows, I was also equally in love with the grainy textures of Instagram. 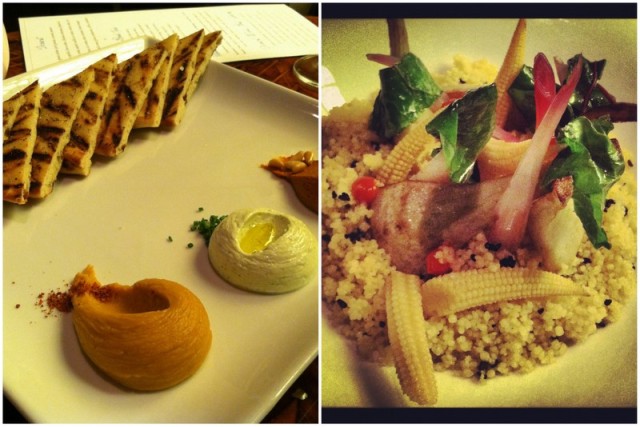 For me, summer began with my birthday trip to Aziza for some of the tastiest Moroccan food I’ve ever had in my life.  This was when I started dreaming of a world in which I pickled my own ramps and drank a spicy rum pumpkin cocktail on a weekly basis. I still have plans to recreate this cocktail at home, but I decided to wait until it was a little more seasonally appropriate. 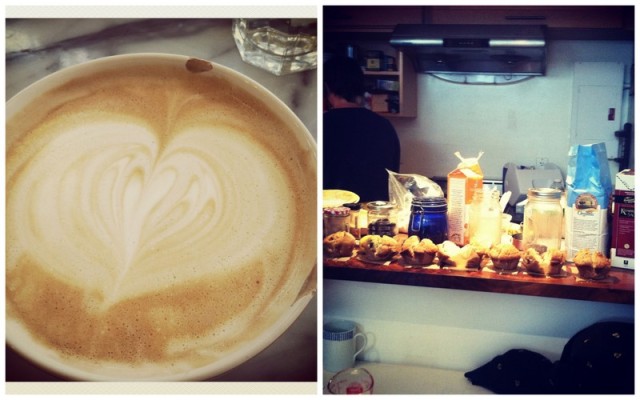 A birthday treat I gave myself was a trip to San Francisco for a scones and quick bread making class at Pot and Pantry. It was a fun evening and I think I can safely say (with 99% certainty) that it’s the only time I’ve ever ridden Bart with traces of flour on my clothes and dough in my hair. For the scones in my bag, it was a sacrifice I was willing to make.

A trip to Tahoe soon followed, where I went on the longest and hopefully most dangerous hike of my life. For all the ills that I suffered on that trip, the Greek more than made it up to me by taking me to Temple Coffee in Sacramento on the way home. I would go anywhere for a good cup of coffee. 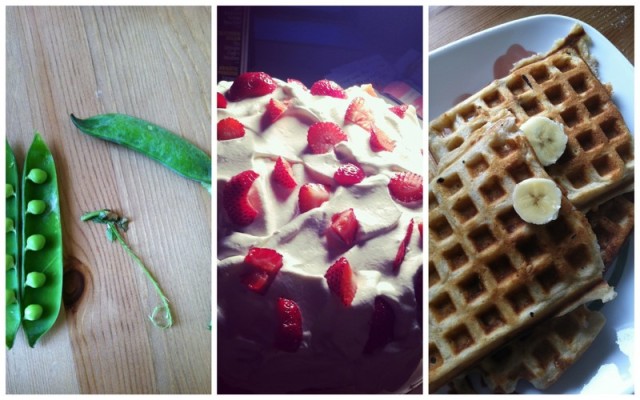 The summer also saw a lot of fun in the kitchen: I shelled peas for carbonara, made a glorious Finnish strawberry cake (now the most popular post on this blog) and pulled out my waffle maker for my love of bananas and walnuts. 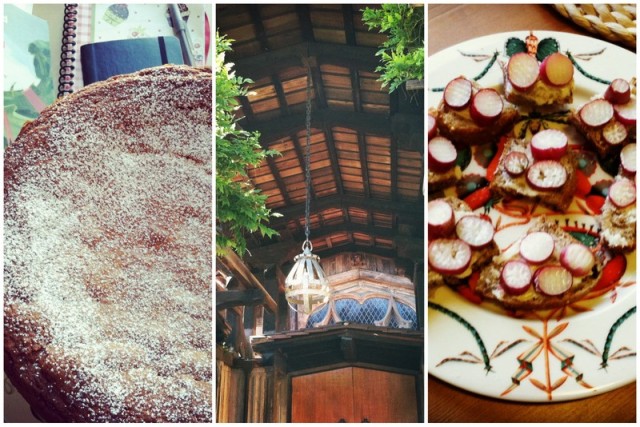 I also continued to ponder the emptiness of my life before Amanda Hesser’s/Elizabeth Friend’s almond cake (aka marzipan cake) came along. And I made ice cream, lots and lots of ice cream. A highlight was my first batch of Jeni’s Splendid: Blackstrap Praline. When not stuffing myself with sweets, it’s safe to say that I was either eating either Greek-style risotto or radishes–sometimes just with butter and salt, sometimes with bread. My love of them, especially after this summer, knows no bounds. 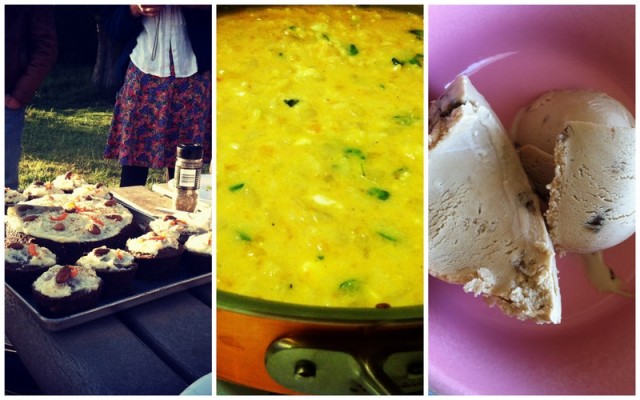 This was also a summer of hellos and goodbyes. A friend left graduate school after getting her Master’s; as sad as it was to see her go and our numbers shrink, she did leave us in style with a lovely picnic at the Berkeley Marina. Carrot cake is more than appropriate on such occasions. 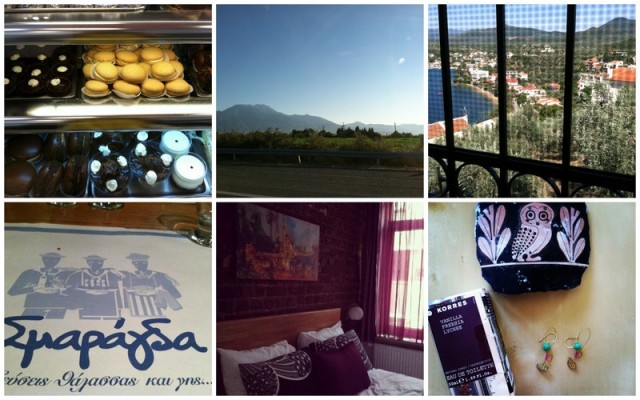 And then we were off on our great Greek and Turkish adventure. You know you’ve had a good summer when you’ve seen Mt. Olympus (please note that I say “seen” and not “climbed”), tried squid ink, stuffed yourself with Greek pastries and come home with some souvenirs and memories.

One of the best things about being back was finding ourselves surrounded by California’s summer bounty. I found some late season rhubarb and, with the help of rosewater (yes, I was still in the Mediterranean), turned it into compote. I also tried to recreate the cover dish from Plenty, albeit minus the pomegranate seeds (roasted cherry tomatoes make a nice substitute). And let’s not even get started about my rediscovery of ants on a log, which I read as a sign of both my allegiance to peanut butter and of my longing for a simpler time.

I wasn’t always in the kitchen, though. I revisited some old favorites and found myself trying some new places, too: namely, Green Chile Kitchen and Pho Bar. At the latter, I bravely ordered a Salted Plum Soda in a throwback to my year in Japan…All I’ll say is this: while I approve of bold menu choices, pickled plum is one thing when wrapped in rice and covered with seaweed and another thing entirely when in a cup and being slurped through a straw.

And then, after a lovely evening out with friends at a concert in the Redwood Grove in Berkeley, the Greek and I became puppy parents. It somehow seemed only right that Rupa & the April Fishes and Quinn Deveaux should see us off onto this next step. 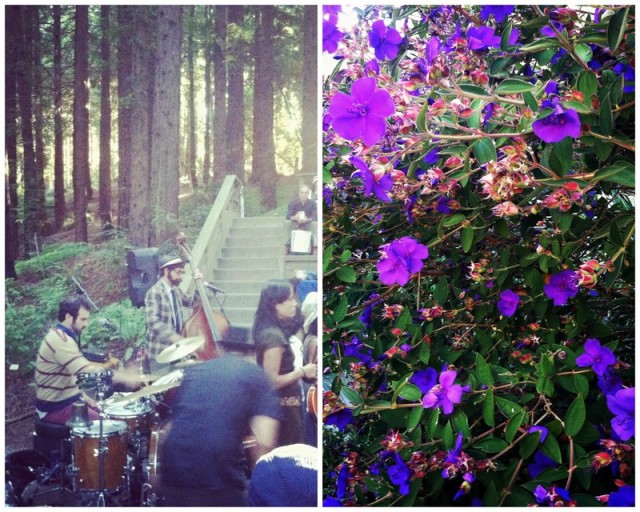 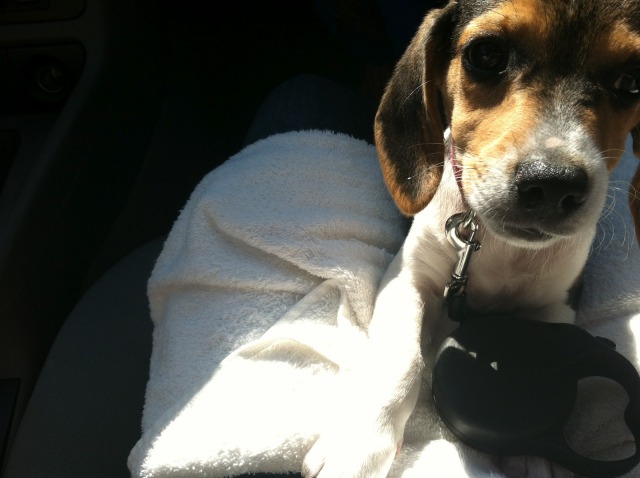 But there is life after puppy, too. This past weekend, since a friend was visiting us, we took a day trip with both her and the puppy. Elektra may be only a young little thing, but she has already sniffed the glory that is Thomas Keller’s pastries in Yountville, CA.  I don’t know that on an ordinary weekend I would have allowed myself to scarf down both a Strawberry Almond Croissant and a Nutter Butter in less than 30 minutes, but this one, thanks to the start of the academic year, seemed kind of special. It really felt like a matter of eat now or forever hold your peace. I suppose since there’s no longer any peace to hold, I ate. 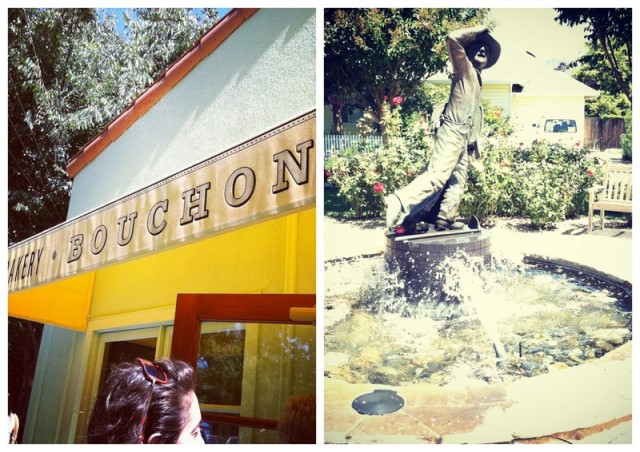 Fortunately, despite the sudden busy-ness of things, I’ve kept right on eating, too. And I’ll be back soon (hoorah for a holiday weekend!) with a recipe that has been spicing up the days that suddenly seem to have grown longer.