At moments of restriction, fantasy alone can lift people above dreariness. Fantasy is a flower that does not flourish on passivity. -Elsa Schiaparelli (“Impossible Conversations“)


It’s strange to think that only a few weeks ago I was in New York City. The weekend there–the first full weekend in July–passed by in a blur of activity; when in New York, after all, one must be out and about, going to museums, sampling the wondrous culinary offerings on each and every block and walking until your feet throb. These things are practically obligatory, and we did all of them in abundance. In fact, the recipe for the Mushroom Toasts with Ricotta that I’m including in this post was inspired by one such outing: brunch at Chelsea’s Tipsy Parson, home of Blueberry Buckles, fluffy Crab Cakes and Pimento Cheeseburgers. I went with the Crab Cakes, and, even though I have no regrets, my heart did experience a twinge of jealousy when a waiter walked by with a plate of grilled bread topped with a mountain of ricotta cheese that, in turn, served as a pillowy cushion for a mixture of sauteed mushrooms. More about that later, however.
Our time in New York was certainly a far cry from the usual pace of our Berkeley life, which is, admittedly, a little (okay, a lot) less glamorous, but much more slow and relaxed. And I like it. I like it so much that there’s a part of me that wonders if, after many years in California, I’ve finally lost my teenage enthusiasm for New York and adapted to something a little more staid and suburban–biking to the farmer’s market, baking bread in the afternoon and evening cocktails at home…But then, when I’m back in New York and I see the yellow cabs and the endless expanse of pure urban landscape spreading before me, I quickly fall into the grip of that old excitement; I know I’m in one of my many homes away from home. 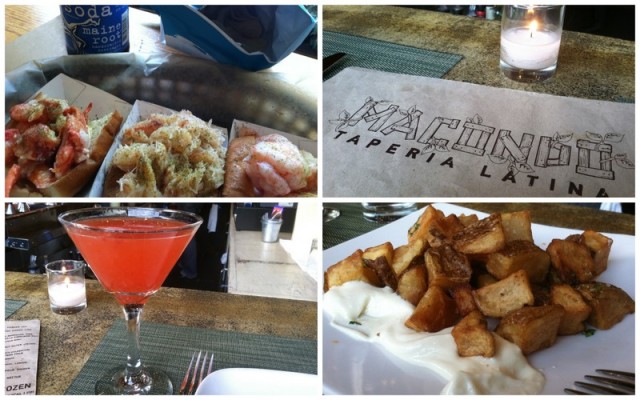 This is why I’m always thrilled to go there with the Greek–to show him some of my favorite places and to spend time with my friends who still live there. Our first day in the city, July 5, was also our two-year anniversary, which obviously called for as much celebration as severe jet lag would allow. Because we didn’t quite manage to have the fish sandwich that he wanted in Istanbul (is fried fish ever a good idea before getting on a plane?), I decided to surprise him with a suggestion for lobster rolls; my impulse would have been the Pearl Oyster Bar or Mary’s Fish Camp, but my friend and hostess, who has encyclopedic knowledge of the New York culinary scene, suggested Luke’s Lobster instead. The sampler for two, which includes mini crab, shrimp and lobster sandwiches, two sodas of your choice (Maine Blueberry was mine) and two bag of chips, was ideal.
Stuffed from lunch, we made our way back to my friend’s air-conditioned apartment, where we spent the afternoon reading the books we had bought at the Strand in the morning. After a few hours, it started to dawn on me that, tired or not, spending the afternoon with Couscous and Other Good Food from Morocco might not have been the best way to celebrate. So we mobilized our energy and headed to Macondo for spicy and fruity Latin-style cocktails and patatas bravas.

The next morning, however, we were determined to have one of those perfect New York days. We weren’t going to let the heat–and it was relentless–keep us inside. And the day began auspiciously, with just the right combination of salty and sweet: leftover Chicken and Waffles from the Clinton Street Baking Co. (it’s just as good for dinner as it is for breakfast, and much less crowded, which is always a plus).

Our next stop was The Cloisters, i.e. one of my favorite places in the city. It’s so far north of the hustle and bustle that, when you emerge from the subway or from the bus, it feels like you’re in a different time and place (granted, the medieval architecture only helps to foster this illusion). It’s wonderfully quiet and peaceful there; even when ridiculously hot, the open space and general lack of concrete allow you to feel cool and at ease. This time around, thanks to my summer Game of Thrones obsession, I also couldn’t help but be doubly enchanted: the stained glass, the biblical portraits of dragons and lions and the statues of courtly men made me feel like I was in Westeros. I was seeing Lannister lions and Targaryen dragons everywhere I looked. 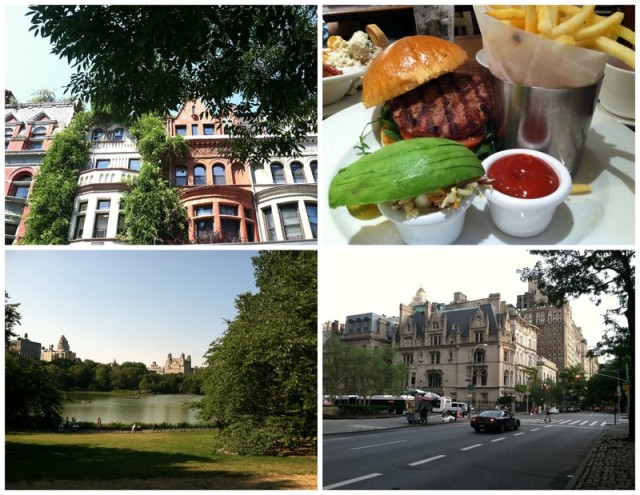 When we returned downtown for lunch, that feeling of being in another world abated somewhat. But the Upper West Side, home of Sarabeth’s West and fantastic cheese blintzes (alas, served only during the breakfast/brunch hours), is not a bad world in which to find oneself.

After lunch, we found ourselves in Central Park, which somehow we had missed on last year’s trip. We crossed Strawberry Fields and then contemplated stopping for a cool drink at the Boathouse, but ultimately we decided just to brave the heat until we got to our next desintation: the Met for the exhibition on Byzantium and Islam. Admittedly, I didn’t see this as a necessary stop and mainly because we had just seen the “real” thing in Istanbul. But, after a quick look around the few rooms devoted to this exhibition, I was really excited to get to go to the fashion exhibition on Prada and Schiaperelli. I left the museum feeling excited at the possibility of one day having a banana skirt of my own.

The rest of our time went by so quickly. There was dinner at Zerza, a wonderful Moroccan restaurant with beautiful lights and excellent tagine. And, because time often seems to revolve around hunger and satisfying that all-important urge, before we knew it, we were again at another restaurant–this time Goat Town, where I had an inspired breakfast of spicy Shakshuka and poached eggs. Then it was time for beat-the-heat iced tea–Orange Creamsicle, courtesy of the tiny East Village teashop, Podunk. 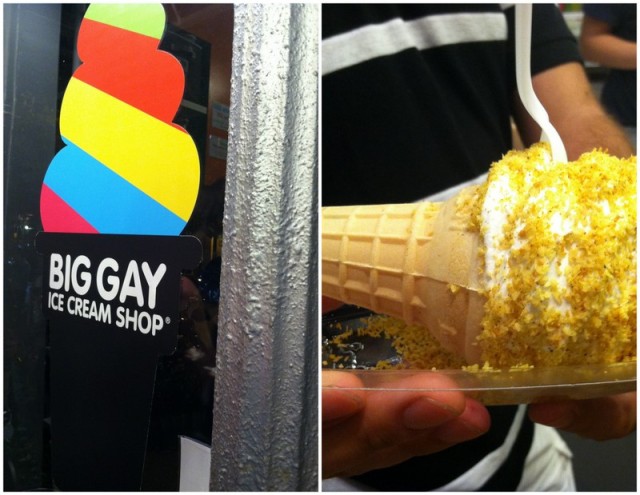 I think we established long ago on this blog that I live and breathe for ice cream, which is why I have no shame in telling you that after a huge meal of Japanese vegetables and okonomiyaki at Family Recipe, my friends and I made our way to the Big Gay Ice Cream Shop. In part it was because I had long been dying to go there and, as the visitor in a sea of locals, I often get to pick where we go, but it’s also because this place is not just good, it’s inventively good. It takes your basic light and creamy soft serve and transforms it into something fun and interesting. For example, the Greek had the Bea Arthur (vanilla ice cream, dulce de leche and crushed ‘Nilla wafers) and I, a lifelong lover of coconut, the Cococone (vanilla ice cream with toasted curried coconut).

While there was much eating, there was also a lot of walking. I finally made it to the High Line, which is just an exciting use of a formerly deserted urban space. Lush and pretty, it’s a place people want to be on the weekends, even on hot summer days (you can cool down with any number of ice pops, strategically placed to save you from melting completely; our ice pop of choice was La Newyorkina). It really shows you, as Frank Bruni, recently wrote in the New York Times, how cities are re-envisioning themselves and how eagerly city dwellers are embracing these changes. 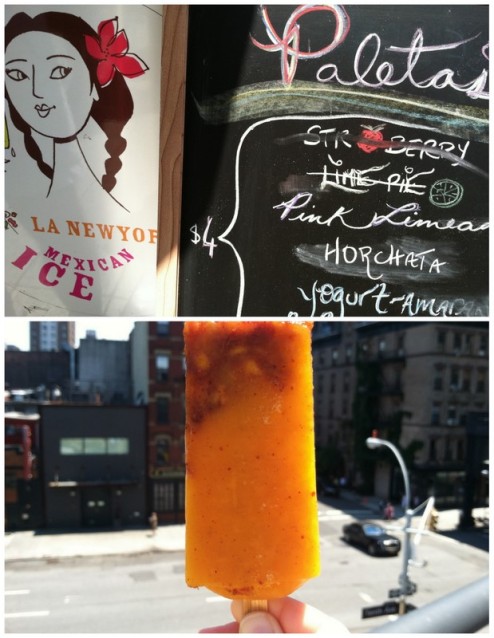 And then it was time to go home. But not without breakfast with a dear Slavic department friend, who escaped from California to New York a few summers ago. Our chosen location was, appropriately, The Smile, which fuses American and Mediterranean flavors (the honey granola with dried figs took me right back to Greece; since the head chef spends her summers in Hydra, this is no surprise). But even after a filling breakfast, it seemed wrong to leave New York without having a bagel and some lox; one trip to Russ and Daughters later and we were ready to hail a cab and sail off into the Western skies.

Once blissfully home, however, I still had New York very much on my mind. I was inspired to head into the kitchen to recreate some of the flavors I had had–to make ice pops and scones, more granola (now done), summery cocktails and those mushroom toasts with gobs of ricotta. Really, it was the cheese that caught my attention, with the mushrooms playing the role of the cherry on top. 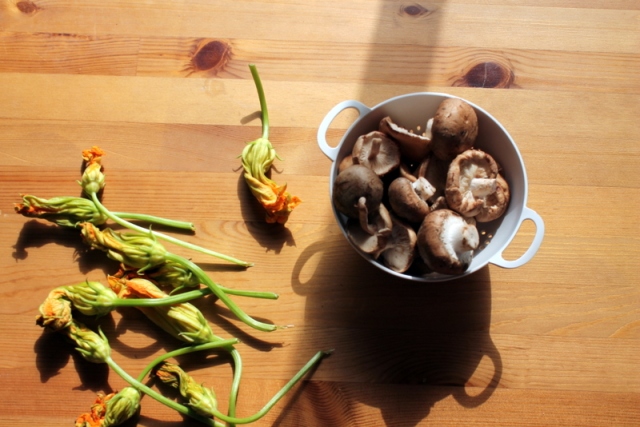 And recently, after a particularly successful trip to the farmers’ market, I got my chance. Armed with fresh parsley, ricotta and a combination of Shiitake and Crimini mushrooms (the Greek was in charge of the scrambled eggs that would go on the side, which would incorporate our own touch–fried zucchini blossoms), I tried to recreate the dish that I had seen only from afar. There’s something about cooking from memory, especially when you’ve already tasted a dish, that can lead to disappointment. While there can certainly be moments of success, you more often than not wonder why yours doesn’t taste the same, or why yours seems to have a different consistency. Too little salt? A missing, seemingly secret ingredient?

But there’s something liberating about making a recipe up from memory, based on both a fleeting glimpse and a description from an online menu. Most likely I’ll never know if my Mushroom Toasts live up to the reality of the Tipsy Parson’s, but that’s okay. I’ve made them my own, perhaps with a little less cheese and a little less restaurant-plating pizzazz, but, still, my own. And maybe that’s what food should really be all about–endless inspiration and adaptation.

-In a small bowl, mix the ricotta with salt, pepper and parsley. Adjust to taste and set aside.
-Heat oil in a medium-sized skillet. Once hot, add garlic and cook, in a cluster, for about 1-2 minutes.
-Add the mushrooms; salt and pepper them, adjusting to taste. Then, continue cooking for about 6-8 minutes, or until the mushrooms are browned and softened. Remove from heat.
-Brush the slices of potato bread with olive oil and place on the grill (N.B. Living in an apartment, I don’t have a traditional grill, so I used a small George Foreman grill. The bread could also be put under the broiler, but only for 1-2 minutes; otherwise, it will burn!). Grill until golden and slightly crispy.
-As soon as the toast is done, place it on two plates in pairs (proximity is important, however, so make sure that the slices are next to each other.). Then, scoop the ricotta onto the bread, making sure to form a small hill (feel free to add more cheese and form a mountain if you’d like) in the center of the two slices.
-Top with mushrooms and serve, preferably with scrambled eggs–maybe even with zucchini blossoms.

7 thoughts on “A Taste of NYC at Home: The Tipsy Parson’s Mushroom Toasts”