Two years ago today, on a foggy California day, I put on a nice dress and headed to a Mediterranean restaurant to meet a guy. That guy, as it would turn out, was the Greek. Our first meeting was pleasant, but, looking back now, kind of strange. You see, I had just returned from the east coast (my annual traveling day is July 4 and, as I’m writing this while flying over western Europe, clearly old habits die hard) and was fairly jet-lagged; on his end, he was a bit frazzled since he was leaving for two weeks in Greece the next afternoon …But our mutual feeling was that if we didn’t meet on July 5, our meeting was likely never going to happen. So we met and shared a Mediterranean sampler that included a series of dips, several rice dishes and pomegranate chicken. I remember thinking how much food there was and how I couldn’t possibly eat anymore, but the Greek gave me such a disapproving look when I initially turned down his offer of pomegranate chicken (later I discovered that this is a favorite dish; to be fair, had ice cream been a part of the date, I would have heavily frowned had the Greek refused a scoop) that I gave in and ate at least two helpings worth.

I’ll admit that, while the date had left me with a positive impression and the all-important good vibes, I couldn’t really say if we were going to meet again or not. There had been talk of a second date in Napa in early August, but that seemed so far away. A month may be but a wisp of time, but it’s long enough to forget, especially in our insanely busy and fast-paced world.

So I went about my business, working on my prospectus in bits and spurts and starting my blog.  This was also the summer of my “castle adventure” (i.e. house-sitting for a professor) in Kensington, trying to figure out how to survive the distance from civilization, the hamster’s tireless night jogging and the dog’s tendency to open my suitcase and pull each and every item of clothing out of it.  While I can’t remember the exact timing, the beauty of writing about one’s life is that you get to color in the murky spots, so I’ll just say that one night after dinner as I was contemplating the thickness of the eternal fog and typing up notes about Sologub, I thought of the Greek and all the sunshine he must have been enjoying. 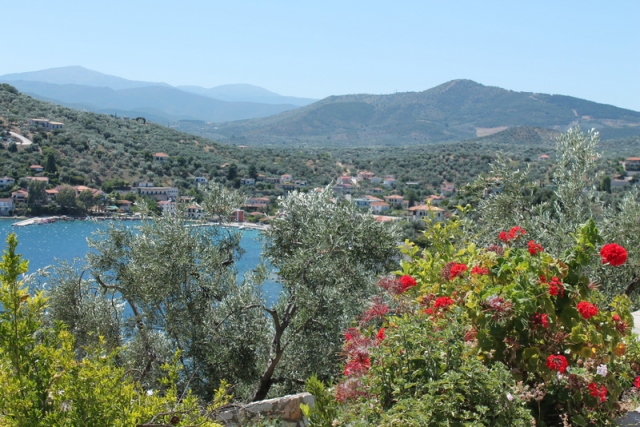 There are women (and men!) who follow rules about what each sex should do in the jungle of dating, but, really, I’ve never been one for such silliness. So I wrote to the Greek and attached a picture of the winter wonderland (the lead photo in an old post) that he was missing. A few days later I woke up to an email that included a picture of a beautiful Greek beach. In his email, he explained that this was the view from his family’s summerhouse in Pteleos. There’s a moment in all human relationships when you either feel or don’t feel a sense of kinship; for me, this act of reciprocation—a photo for a photo—was such a moment. It may seem like a small and silly thing, but it was, at least in my eyes, a sign of thoughtfulness and effort. I remember telling a friend about it when she came to visit me at the castle. She joked that maybe I would one day travel to Greece and see the same view with my very own eyes. At the time, we both laughed (can one predict such things after one meeting, after all?) and then went on with our cooking and baking.

But perhaps that pronouncement in the midst of our “Zucchini Fest, 2010” was prophetic. Both of those things happened this summer. I finally saw Pteleos in the flesh. The only thing I can say is that photos don’t do the blue of the sea justice. They also don’t capture the peace of the place and its pastoral quality (it’s in the Greek countryside, smack between Athens and Thessaloniki). The house is high up on a hill and looks down on the beach from its own special perch; olive trees and bougainvillea surround it. Owls hoot at night and I saw my first live praying mantis there, too.

Really, I saw so much while I was in Greece, but the house at Pteleos was a favorite. It was where I took one of my first swims, ate some of the freshest fish I’ve ever had in my life and also where I made my full recovery from the stomach bug that plagued me in Milos. It was a place of many conversations, Euro 2012 (soccer/football) disappointments and pleasantly balmy nights. As I finish my dissertation this upcoming year, I think yet another trip to Pteleos is the prize that will loom in the distance of my mind’s eye. Could there be anyplace better for dissertation detox?

6 thoughts on “A House for the Summer: Pteleos”