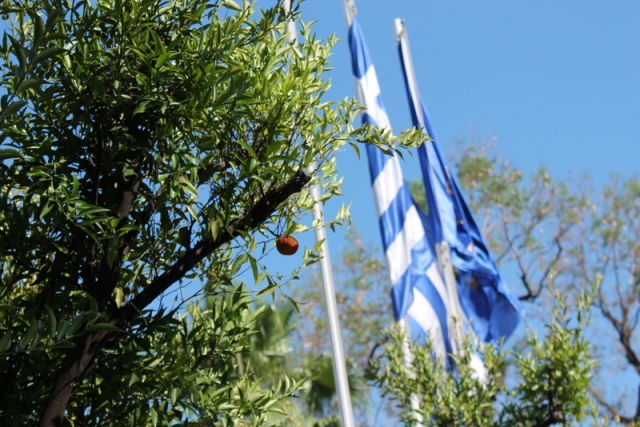 Athens, the eye of Greece, mother of arts
and eloquence. – John Milton
There is much that is overwhelming about Athens. Before ever even having stepped foot in the Greek capital, I had heard that it was dirty, unsafe, sprawling and as hot as an inferno. And while I can’t say that my two and a half days there did anything to dispel its reputation, I nevertheless found that there was much about the city that could recommend itself. 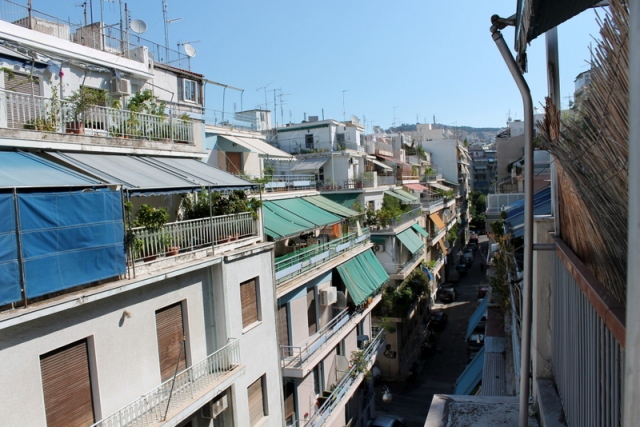 The city may be an urban labyrinth on par with New York, Los Angeles and Moscow, but it is also a surprisingly green city. Most apartments include a veranda, where you can not only sit and relax, but also create glorious gardens. The Greek’s aunt’s apartment had such a garden and it was wonderful to be able to step outside in the morning and, if not to inhale entirely fresh air, at least to eat breakfast surrounded by plants and maybe even with a pleasant breeze–that is, should Aeolus, the god of wind, see fit to provide you with one. 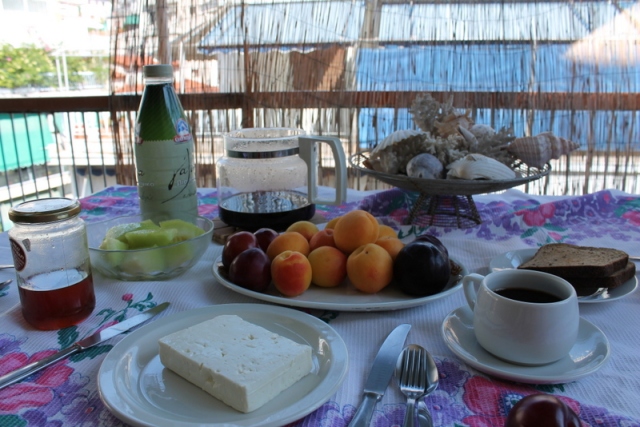 On our first full day in Athens, the wind was on our side. As we hiked up to the Acropolis, it blew steadily, deceiving us into believing that we were less hot than we actually were. With your hair whipping in the wind and standing both above the whole expanse of Athens proper, you also can’t help but feel the holiness of the place–as well as its legacy and magnificence. 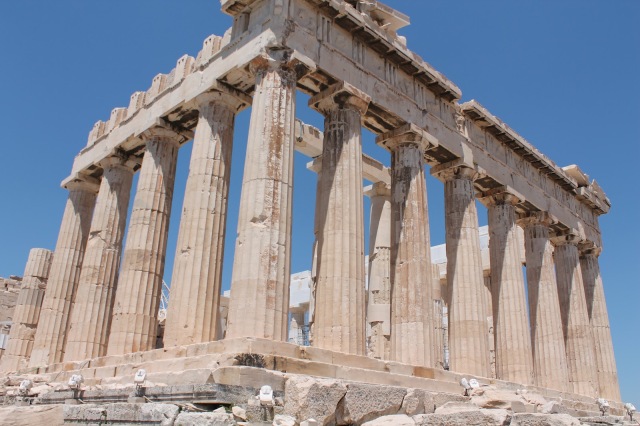 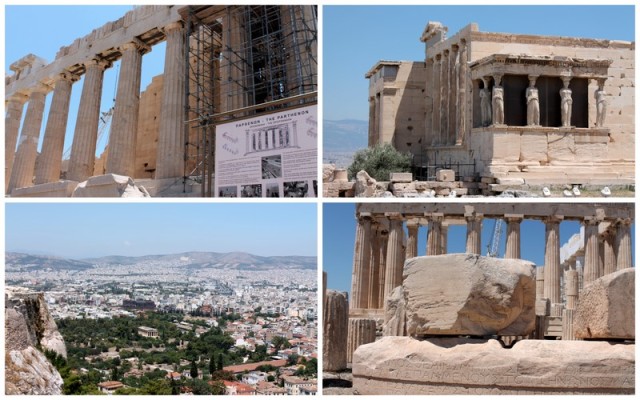 After spending the morning looking at ruins both at the Acropolis and the Acropolis Museum, we made our way into more fashionable parts of town to have lunch and to explore the “modern” world (still, however, a sense of history pervades each and every inch of Greece; what can be truly new in a land that has been constantly inhabited for thousands of years?). This took us to Ouzo Melathron, where we had a feast of salad, gavros marinatos (marinated anchovies, or the Greek version of ceviche), zucchini cakes with tzatziki and a meat platter. 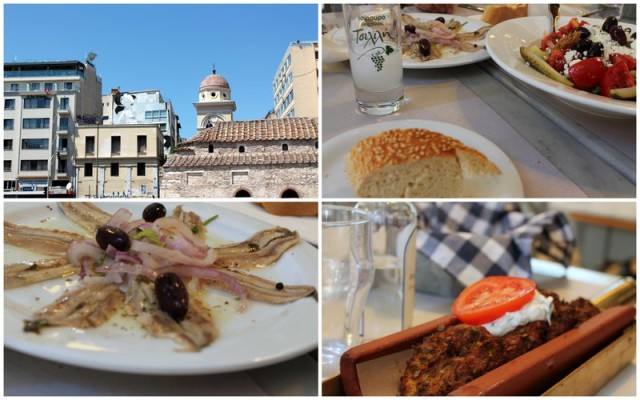 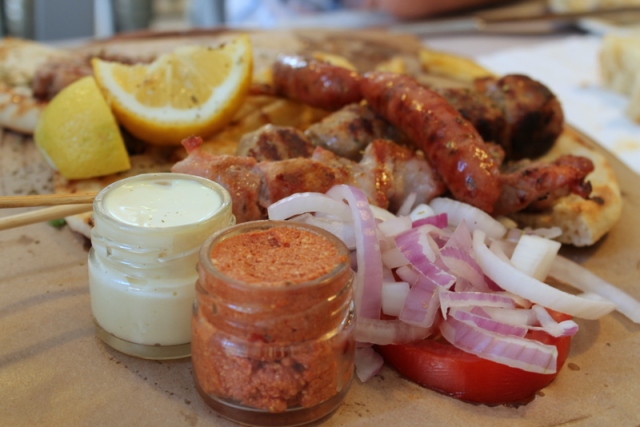 Afterwards, it seemed only fitting that, for the sake of both our figures and sightseeing, that we should walk around and experience some of the vastness of Athens. 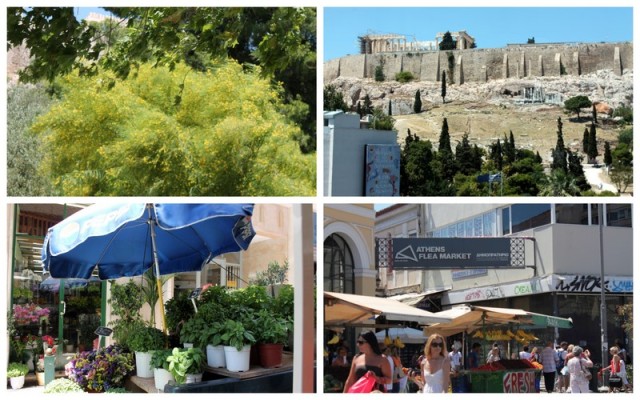 I was most in love with the blossoms; on almost every street, there were either pomegranate trees that would one day bear fruit, or bitter orange trees already in bloom. The Greek’s godfather warned me that such oranges are not to be eaten on their own, but that they make a wonderful spoon sweet. He also told me the anecdote about an Italian friend of his who hated everything about Greece. Apparently, one day this man was tempted by the oranges, peeled one and popped a piece into his mouth only to spit it out, shouting that the blasted Greeks couldn’t even grow proper oranges. Keeping this story in mind, I admired them only from afar. However, the bitter oranges, at least to me, seem like the quintessential symbol of Athens; not only are they everywhere, but they’re also a sign of the city’s prickly nature. It’s a place where caution must be observed and also where, even in the midst of the perfect combination of ancient and modern beauty, dangers lurk in the city’s shadows. 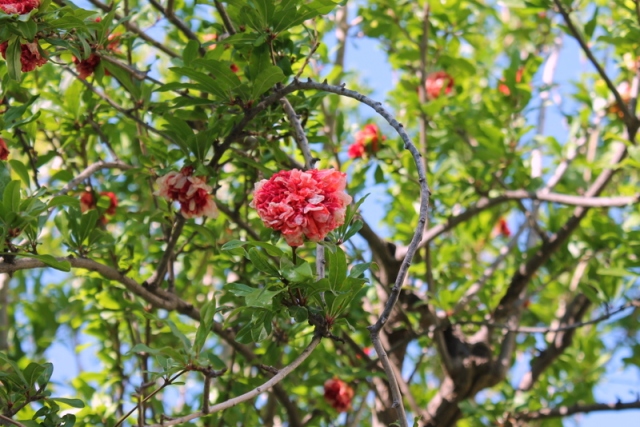 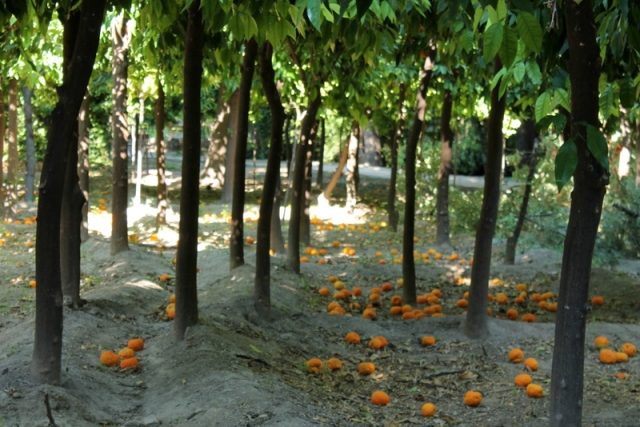 Our final stop in the city was the fashionable old money neighborhood of Kolonaki, where Athenian “aristocracy” resides. It is certainly a neighborhood where one goes to people watch (and to be seen in return) and from the outdoor patio of Cafe Peros, where the Greek and I both sipped a frappe, we saw many interesting characters walk by. 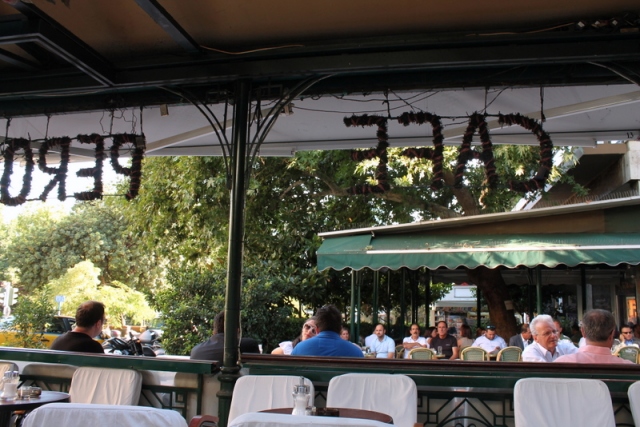 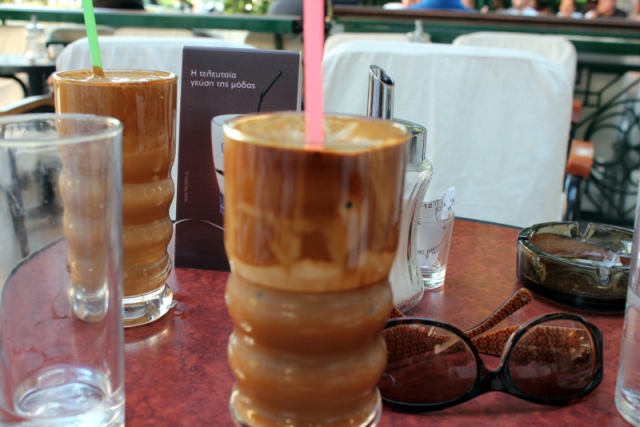 My time in Athens passed by much too quickly and, in truth, was only a brief taste of all the city has to offer, but it was nevertheless a nice introduction to the Greek capital. After all, I had enough time to discover bitter oranges, to see many things I had only read about and seen in books and also to witness, when the Greek and I walked by the President’s Palace, the beginning of the new political regime in Greece. In a way, seeing the newly appointed Prime Minister step out of the palace felt like getting a glimpse of yet another one of Athens’ many beginnings; given the political climate of today’s world and the fact that Athens has recently seemed on the brink, this beginning couldn’t help but seem perhaps even more important than many of those which have already passed.

2 thoughts on “Athens on the Brink”