They say that Milos is the island of lovers. It is Aphrodite’s island, where the famous Venus de Milo (keep in mind that while in English we say, “MYlo,” it’s really “MElo”) statue was found in 1820. To step off the boat and to see the crystalline blue of the water, as well as the whitewashed houses that speckle the island, you can only agree with the island’s reputation for beauty and love.

Which is why it was a slightly cruel twist of fate that, before leaving for the boat that would carry us to Milos early on Thursday morning, I had started to feel somewhat nauseous and fevered. By the time we reached the island and stepped off the boat four hours later, things had dramatically worsened and I couldn’t help but wonder if Milos would be the place where I took my final breaths. Call me dramatic, but there is nothing worse than being sick to your stomach in a place with relentless heat, eternal sunshine and delicious food.

So you can imagine that, while our first stop, at least in an ideal world, would have been one of Milos’ 70 beautiful beaches, it was instead the Milos Health Center. Within 2 minutes of entering the center, we were ushered into a room by a cheerful blonde nurse, who took both my temperature and blood pressure. Then, a few minutes later, the young doctor sleepily stumbled into the room (he had been napping) after having been awoken by the nurse. His verdict was a stomach bug that would most likely pass in 3 days, the exact duration of our time in Milos. We all had a laugh about my bad luck (I insisted this was punishment for my former gluttony, of which there can be no doubt), I was ordered to stay hydrated, not to exhaust myself, to eat only bland foods and to get a hat to protect myself from the bright Milos sun. We left the health center without paying a thing (I wonder if Americans even realize what they’re objecting to when they say no to universal healthcare: is there really anything wrong with no bill, no prescriptions and no waiting time?) and found a lovely straw hat that an elderly shop owner, Kyria Sofia, insisted suited me perfectly.

Soon, with the hat on my head and a Coke in my hand, we were strolling through the village of Plaka, which gave us a wonderful view of the sea, the cliffs and even of some of Milos’ famous windmills. We also found a lovely restaurant, appropriately named “Aphrodite’s Garden,” where the Greek ate ravenously and I attempted to consume some grilled chicken and rice. Saddest of all was that we got a lovely yogurt with graham crackers and lemon for dessert, but I couldn’t even bring myself to eat more than a spoonful. Clearly, the fact that I had no appetite for dessert is all the proof that is needed for how sick I was truly feeling.

Fortunately, however, there is a silver lining in our Milos adventure. By the next afternoon my fever finally broke and I was able to accompany the Greek (who I now might start referring to as the Fish, thanks to his ability to swim tirelessly) to the small, private beach close to our hotel, the wonderful Milos Camping and Bungalows, for a short swim.

It was already quite late in the day, so the sun was setting and, after almost a full day of being in the hotel room listening to the wind (the Cyclades Islands, of which Milos, Santorini, Sifnos, Siros, Mykonos, etc. are a part, are known for their winds), I was excited to again pick up my camera and to capture the varied landscapes of Milos, from the fields to the Aegean Sea. And especially with the sun setting majestically over the island, infusing everything around it with color.

Our next–and last–day in Milos was my best. We walked to Provatas and spent the day swimming and relaxing on the beach. Having felt my appetite for all things return, I hungrily ate a piece of cheese pie and also again started devouring book three of The Game of Thrones. It was slightly hard to concentrate, though. Is it so often that you come across water this blue? It was so clear that you could see not only each and every fish, but also the curling strip of dark blue algae that marks the sea like a distinctive birth mark. 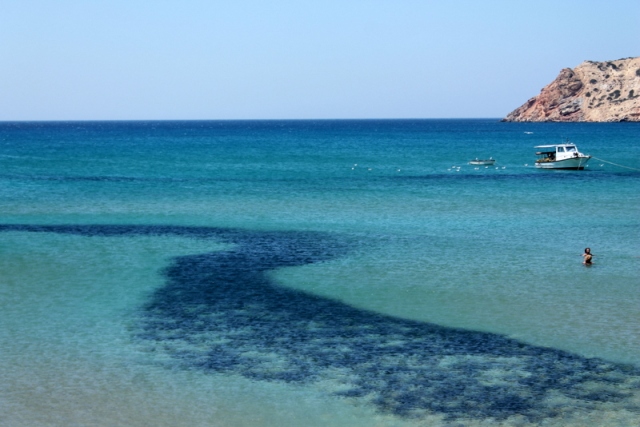 I will confess, however, that while I was more than thrilled to have had my one good day in Milos, all of the swimming and the sunshine (even with the lovely straw hat) led to a tiny relapse. It was either that or the fact that, having spent myself swimming, I allowed myself to gorge at dinner on a stuffed tomato, a delicious salad with feta and the kerasma that the kind cook at the hotel gave us: fresh apricot preserves from the hotel’s own trees.

Regardless of my bad luck or faulty immune system or punishment by the gods (whichever you’d prefer calling it), I was still glad that we got to see Milos. A trip to Greece would hardly be proper without at least one island adventure.