“Traveling is a brutality. It forces you to trust strangers and to lose sight of all that familiar comfort of home and friends. You are constantly off balance. Nothing is yours except the essential things – air, sleep, dreams, the sea, the sky – all things tending towards the eternal or what we imagine of it.” –Cesare Pavese
After 36 hours of door-to-door travel, we have finally arrived in Greece. In a way, the trip was one of my more pleasant travel experiences: Turkish Airlines not only has good food (i.e good airplane food; I can’t stress the difference between good food on land vs. good food in the air enough) and entertainment services, but since it’s based in Istanbul, you might also get to have a long enough layover that you can escape the airport, stretch your legs and breathe in some of the morning mist that hangs over the city, just waiting to be burnt off by the sizzling heat that will come. 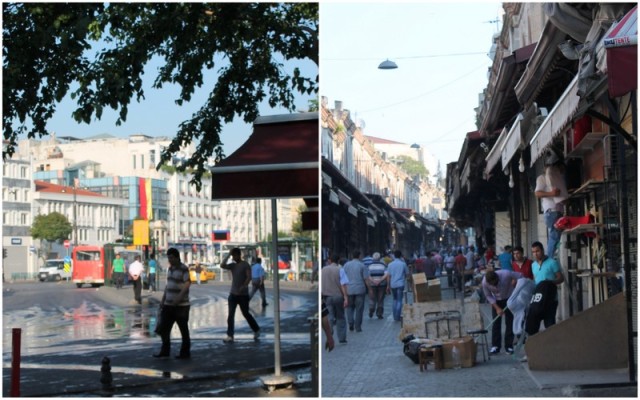 Since we arrived at 6:00 a.m., we made it to the city center, old Istanbul, before 8. And it was really fascinating to watch the city wake up. After the monotony of the airplane, it felt good to be involved in the hustle and bustle of urban life. Despite the early hour, the streets were crowded: shopkeepers were throwing water on the streets outside their stalls to clean them, boxes were being unloaded and, on several street corners, men were setting up tables with oranges to sell juice to the people walking to work.

As strange as it might sound, I was incredibly intrigued by the city’s “juice situation.” It quickly became apparent that whenever fruit was hanging outside a shop, that meant that fresh juice was to be had there; kiwi, apple, pineapple, watermelon: the options were endless. And while I would never call myself a juice person, I was suddenly craving orange juice. When we finally sat down for breakfast, my wish came true; to go with my cheesy breakfast börek, a flaky pastry made of layers of dough, I had a big glass of pulpy, frothy orange juice. It was so tangy and rich that it makes my bias against cartons of orange juice all the stronger. A juicer may be in order, although I still doubt I could replicate the flavors of a juice that seems to have come from an orange tree in the backyard.

After breakfast, we emerged into a city that was rapidly becoming hotter and hotter. Although we were each carrying a backpack containing our laptops, we were determined to see as much as possible. Part of our mission was to scope out the city and to plan a little of what we were going to do when we head back to Istanbul in early July. The other part of our mission was, I think, to try to feel human again. Airplanes simply have a way of dehumanizing you and of taking the joy out of travel–the air is stale, your body feels first inflated and then deflated and, worst of all, you’re cut off from the rest of the world, from the smells and sensations that make travel so worthwhile.

Although we spent just a few hours wandering around, Istanbul definitely brought us back to ourselves. We saw in men in suits with thick mustaches sitting at coffee houses, looking very serious and most likely discussing business or politics. Then, outside a large mosque, people selling bird seeds were feedings the pigeons; somehow, we were crossing the square at just the moment that they were taking flight…It’s hard to believe that I managed to capture the moment, given my fear that a kamikaze pigeon was going to fly into my head or, even worse, into my camera lens, but I did. And as I was walking away, an elderly woman tried to get me to buy some bird seeds from her; when I shook my head no, believe it or not, she stuck her tongue out at me. Nothing brings you back to the reality of the human experience more than flying birds and immature gestures. I was a cross between shocked and delighted; it was The Birds meets Mary Poppins.

Besides birds, we found several adorable cats loitering in the shade around shops and in gardens. Based on my initial impression, I would certainly say that Istanbul is more of a cat than a dog city–literally and perhaps even metaphorically. It’s a sleek city, relaxed but alert.

In addition to our ramblings, we made it into one landmark–the mausoleums of Hagia Sophia. Not only were they absolutely gorgeous in terms of the colors and the construction, they are also amazingly cool, peaceful places. Stepping into them, you can almost feel how religion and faith acquired their power; even as they daunt you, they welcome you into their soothing, still embrace. Despite the fact that I covered my hair with a scarf (a requirement and definitely one that is not at all flattering–think peasant girl in glasses), I was loathe to leave the comfort that the marble structures offered….

But you know what the best thing about thick heat is? That you can eat ice cream in the morning and it doesn’t even count. That’s always been my philosophy and, after leaving the protection of the mausoleum and getting back on the crowded train for the airport, I suggested that we sit at an outside cafe and enjoy something cool. With the Blue Mosque in the background, the Greek was not all that persuaded by my logic and went the healthy route with grapefruit juice, but I opted for a Fruit Festival ice cream cone. The key word was fruit, which is how I justify all of my questionable life choices.  🙂 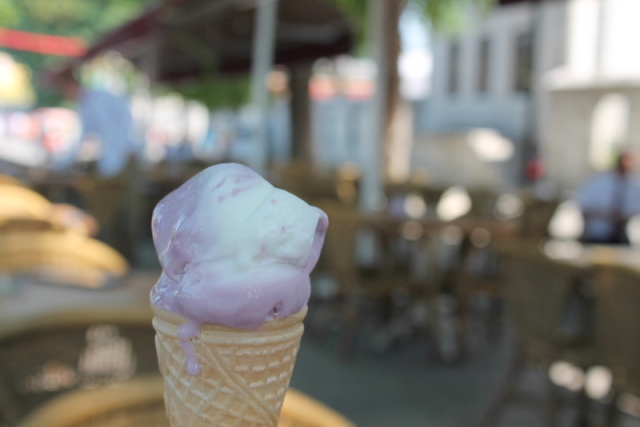 It was a nice way to begin our vacation. I haven’t yet taken any pictures in Greece, but, once I do, I’ll be back with more tales from the Mediterranean.

11 thoughts on “A Fruitful Layover: 5 Hours in Istanbul”