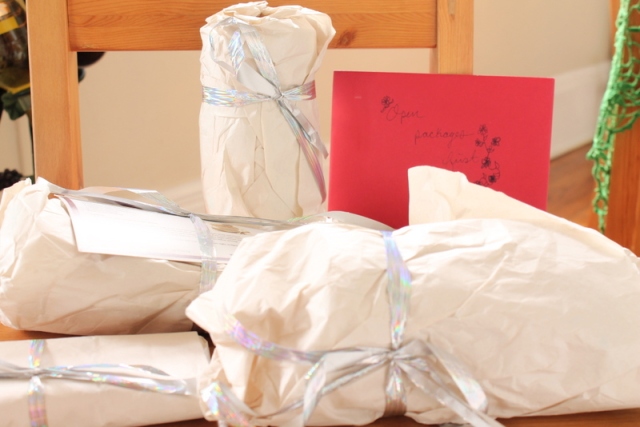 Last week I was basically housebound, going nowhere and seeing no one but the Greek. I cancelled the majority of my commitments, I settled into the couch to read books that had long stood on my bookshelves ignored and I ate lots of oranges and soup. And then, in the midst of this monotonous desert, came a box–and not just any box. It was my first ever “foodie pen pal” box, from Jenny at Frankly, Fatso. I was immediately excited because a) I love getting mail, b) it was contact from the outside world! and c) since Jenny is from the the D.C. area, who could say what unknown treats were waiting for me inside?

The box was filled with prettily wrapped edible things; honestly, before even getting into the contents, the box itself was a revelation because it was clear a lot of thought and care had been put into it. I’m not the best gift wrapper in the world, so I really admire those who can make any oddly-shaped box or jar look good. As I began undoing Jenny’s careful wrapping and silver ribbons, starting with the smallest thing first, I was excited to see what was in store for me and my eternal companion, my sweet tooth. First to be revealed was my favorite combination ever: Milk chocolate peanut butter cups.

Next was a bag of Cranberry Orange Cookies (still unopened; even though sick and not all that hungry, the peanut butter cups didn’t last 15 minutes) and Raspberry Jalapeño Jam.  On Friday morning, I couldn’t resist opening the jam for my toast; it’s really good–more spicy than sweet, but not in an unpleasant way. I’m thinking that, rather than toast, this jam would work well with roasted meats or maybe on crackers with goat cheese…

And last but not least, more peanut butter! This time, however, it’s a healthy peanut butter alternative–gluten-free granola. I’m really interested to try this to see what the texture is like, what the flavor is like and even to play around with the card that Jenny included: 5 easy ways to savor our granola. This granola is from PA and it turns out that, like me, Jenny is from the Keystone State. As Tolstoy would say, mir tesen (it’s a small, or crowded, world). 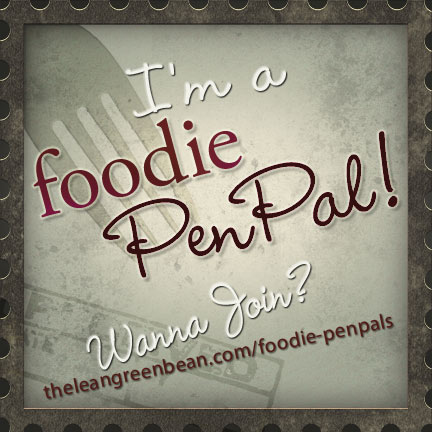 I loved my first experience with foodie pen pals, both buying (my recipient was Morgan at Crazy4Oats) and receiving. It was a great opportunity to meet some new bloggers (the blogging world is wonderfully, insanely huge!) and a nice way to get to try some food that I might otherwise never have known. Thank you, Jenny, for the wonderful box and to Lindsey for organizing 600+ bloggers into pen pal pairs!