When we cook things, we transform them. And any small acts of transformation are among the most human things we do. Whether it’s nudging dried leaves around a patch of cement, or salting a tomato, we feel, when we exert tiny bits of our human preference in the universe, more alive.
-Tamar Adler (An Everlasting Meal)
My homecoming this past week has taken many shapes. There was the Saturday morning brunch at the charming Elmwood Cafe, which is literally a hop, a skip and a jump from my apartment. I’ve been there many times in the past, but never for a proper breakfast. My breakfasts in Finland were pretty simple–toast, yogurt, muesli, maybe the occasional soft-boiled egg with aioli-slathered toast–so you can imagine my delight when I saw a toasted coconut waffle on the menu. Needless to say, this was the breakfast I hadn’t even realized I was dreaming about. I can find plenty of complaints to voice about my native land, but you will never hear me say a negative word about the innovative American breakfast.

There was also a much needed ice cream and movie date (Hunger Games!!) with some good friends, which included the hand delivery of pretty artisan buckeyes from the Buckeye State itself. If I ever had to choose 5 things to take to a desert island, a box of buckeyes–that perfect combination of peanut butter and chocolate–might just be at the top of the list. The movie was followed by an evening of painting eggs for Easter, real Eastern European-style pysanky. Beyond decorating desserts with chocolate chips or chocolate shavings and knowing how to wield an eye liner pencil with some skill, I’ve never been the most artistic person in the world. I deviated a bit from the usual black wax and decided to destroy a candle in the name of red polka dots. The Greek, who went the traditional route, ended up with some nice chemical compound-inspired eggs. It was a fine evening and definitely a nice way to get back into the Slavic spirit of things and to see some friends.

Truly, it’s been a week of satisfying various cravings, of absorbing the sunshine, basking in the slightly humid breeze and of finding myself picking up where I had left off on March 1. There have been Greek essays to write, vocabulary words to learn and texts to be read. There was the lovely sensation of falling back into Tamar Adler’s food “manifesto” and of feeling inspired to get back into the kitchen. I’ve even, thanks to various degrees of jet lag, seen the sun rise more than once on a few stunning, fog-free mornings. And somewhere between seeing a few unused taco shells in the cupboard and a trip to the Ferry Building where I bought a few bags of Rancho Gordo beans, I realized just how badly I wanted Mexican food.

So I got to work making pinto beans. I love this process, the thought of knowing that, if I just cover them with water and let them simmer for a few hours, an almost ready meal will emerge from the pot. I certainly had plenty to keep my hands full in the meantime: there was an avocado to be sliced and covered with lime juice, cilantro to be washed and removed from the stems, taco shells to be put in the oven, garlic to be minced for the re-frying of the beans and each item to be put into a little bowl–just like we used to do when my mom would make tacos for dinner. I thought a lot about her and our taco/burrito nights as I was mashing the beans and frying them with garlic. I remembered the way I would scrunch up my nose as she and my dad would cover the beans with a spicy taco sauce and eat them with a fork. Little did I know, just like with lima beans, I would one day come to love all the things I was once foolish enough to hate. 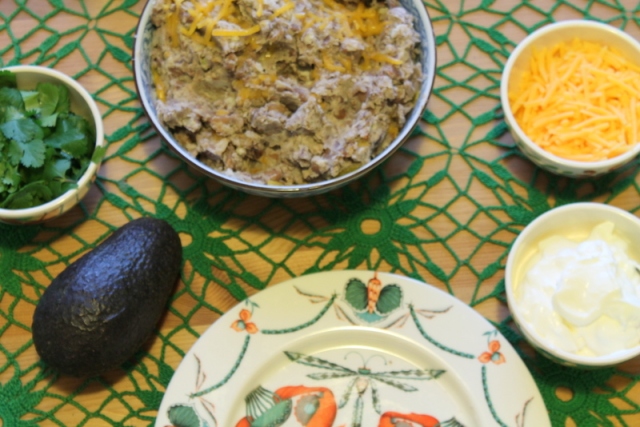 The end result was a meal that elicited unadulterated joy. I could taste the many layers of home–the cheesy and garlicky beans of my childhood and the cilantro- and avocado-infused flavor of my ongoing graduate school years here in California. It was the right meal for my homecoming and, considering I used my dragonfly plate from Finland to eat on, for me it really did combine the best of all possible worlds. 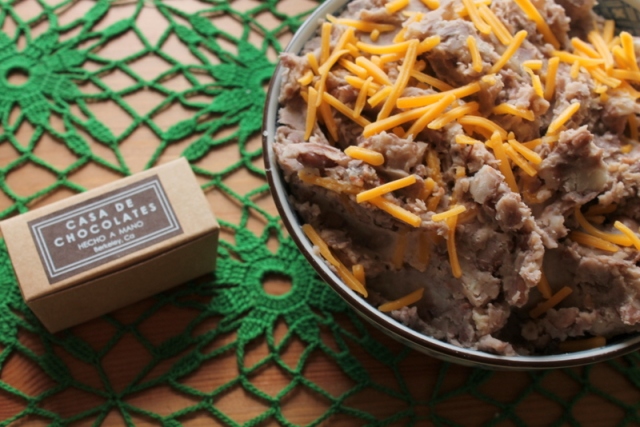 I like this recipe because it allows you to make the beans the day of, without the extra step of soaking, which I never have the foresight to do. Also, since the Greek is still observing Lent for the Orthodox Easter, I made them with olive oil instead of bacon fat. I also, because of my love/hate relationship with onions decided not to add them, though it would have provided a little extra flavor and moisture for the beans. Garlic, salt and red pepper flakes with a handful of cheese were enough for me, but these beans, like most beans, can be adjusted to accommodate almost any personal preference.

-Rinse the beans and remove any damaged ones and/or small stones.
-Place the beans in a large pot and cover them with water.
-Bring the beans to a boil, then lower the heat, cover the pot and allow to simmer for about 2 hours or until the beans are soft and their skin is just beginning to crack. *Obviously, should you have one, the beans could also be cooked in a pressure cooker.
-Drain the beans.
-Heat a deep skillet and add 2 Tbsp. olive oil.
-Add the beans and 1/4 cup water and stir.
-Then, add the garlic, red pepper flakes and salt. Continue stirring.
-Begin to mash the beans with a potato masher. The beans, at this stage, might begin to stick to the bottom of the pan and dry out. If this happens, add more water (I had to do this twice) and continue mashing.
-Once the beans are generally pureed (the end product should be a bit uneven and slightly lumpy), turn off the heat and taste to adjust the level of salt and spice. I also, at this stage, added an additional tablespoon of olive oil and mixed it through.
-Transfer the beans to a bowl, sprinkle or cover liberally with cheese and begin assembling your own taco feast.

2 thoughts on “Longed For Tacos and the Food of Home”