The “kaamos”–sunless midwinter–has weighed upon nature for months now. And when the sun appears on the southern sky it is the first sign of new spring’s coming, a spring which is still many frosts, weeks and months away. -Urpo Huhtanen
This past weekend, I traveled to the Lapland and back. I had imagined many times before going what it would be like–how would I manage with no running water? Would I be able to ski with a 15 pound bag on my back? What would a reindeer race be like? Did I really know what I, the girl who hates camping, was getting myself into?– but, as it turns out, my vaguely formed ideas failed to live up to the reality. Truth be told, the most shocking moment for me happened before we even arrived, when my friend turned to me on the plane as we were discussing our grocery list and asked, “Do you eat blood?” Had a camera been trained on my face at that moment, I’m not quite sure what it would have looked like, but I think fear, disgust, confusion and surprise mingled together. And then, as I grasped at straws, thinking that something had been–must have been– lost in translation, I asked if she meant “blood sausage.” She said, “No, blood. Reindeer blood. For pancakes.” For a brief moment, I was torn; on the one hand, it was pancakes, a word I certainly don’t mind hearing. On the other hand, it was blood, and I have been known to pass out after giving it. I had to say no; such a culinary adventure was not to be in my future. We could talk reindeer burgers, but blood pancakes and I were not meant to be. 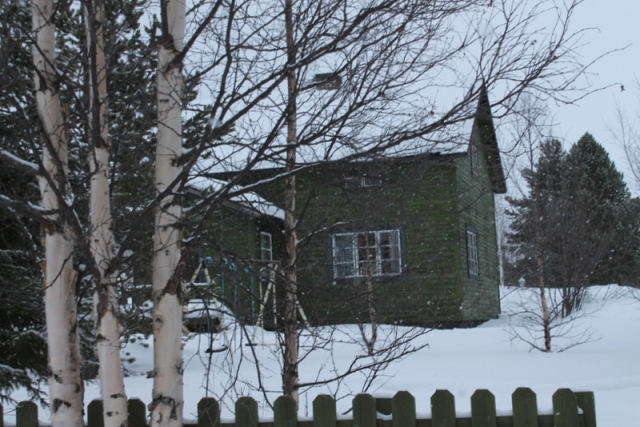 That minor horror aside, I can safely say that, from the moment we stepped off the plane at the tiny, nearly deserted airport in the middle of a snowy field, I was enchanted. It was so quiet, so white and grey; it’s the kind of landscape that makes you think it’s waiting for something and that, until it arrives, time stands still. But fortunately, in the midst of all that pristine whiteness, there was the occasional burst of color–brightly colored red and green buildings that stood out, providing relief from the stark scenery. 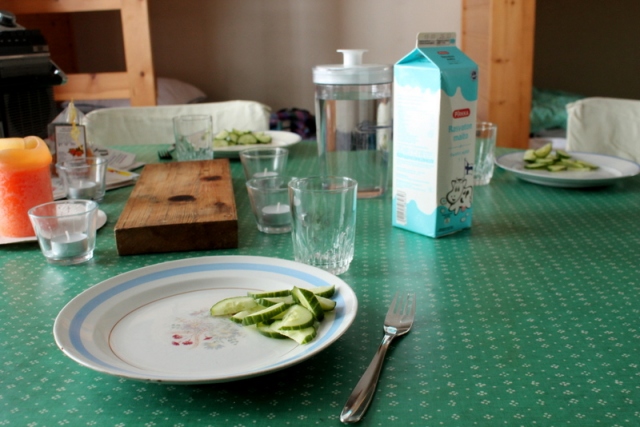 And, amazingly, despite my slight misgivings about my ability to manage without the conveniences of modern life, I did just fine. Of course, there was the small issue that I’m hopeless when it comes to lighting matches, that I’ve never chopped firewood in my life (to be fair, have you?) and that I panic at the sight of spiders (8 legs vs. 2; it’s as simple as that). But I can wash dishes like a champion, I always carry snacks and I’m cheerful in the morning. Such things do, it turns out, count for something. While of course I can cook and bake, the menu in the cottage was traditionally Finnish, so I was just observing, busily taking notes and snapping pictures.

A small part of me even felt that I was finally fulfilling my childhood Little House on the Prairie fantasy, but Scandinavian-style. There was no churning butter, but there was Pasta Bolognese, a Finnish go-to meal. Similarly, there was no fireplace, but there was a gloriously steamy sauna and a kerosene heater, where I dried my hair one night. 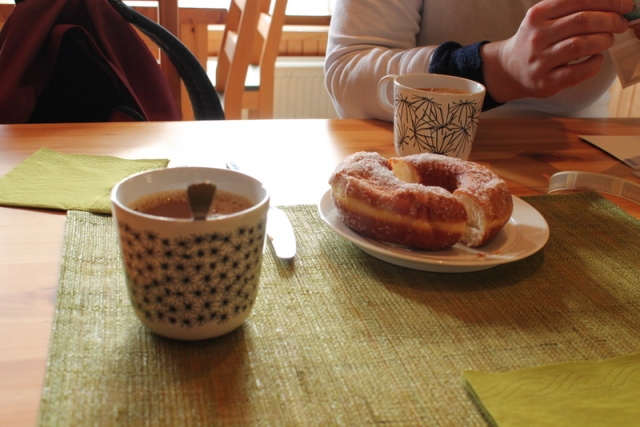 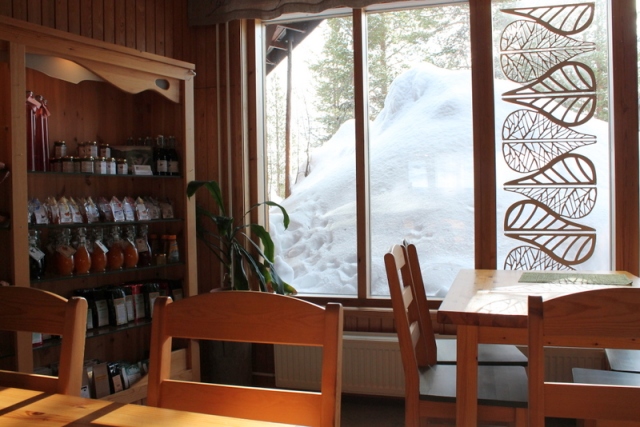 And everywhere we went, we went by skis. It was a humbling experience and one that makes me ever so fond of my dear, trusty legs. I savored the coffee breaks at places like the Nature Center. I found a beautiful cookbook there, Lapland a la Carte, which I was tempted to buy for the gorgeous photography, but, ultimately, I just couldn’t justify the purchase. When, after all, will I find myself with the ingredients to make a Reindeer Loin Stew? Or a Cloudberry Parfait? For practicality’s sake, I’ll just have to settle for the lovely Greek-Italian-Finnish book of Tessa Kiros, Falling Cloudberries, to explore from afar the country that I will have left in exactly one week’s time.

I realize now that, by being in Helsinki, I’ve scratched only the surface of this country. Traveling to the north, it’s a completely different world, a landscape dominated by the fells (or fjells/fjelds) that rise in the distance. My friend described them aptly when she said that they’re like uneven bits of clay molded into the fields. 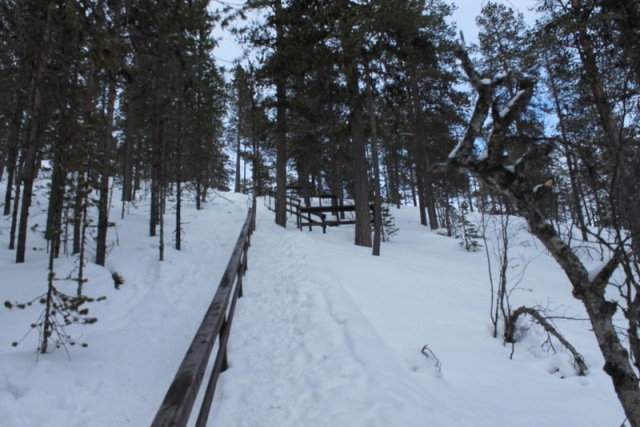 After climbing this steep and snowy hill, you could see how they encircle the landscape. Even on a cloudy day, it was such a majestic sight that I snapped many, many photos.

The days there took on a happy rhythm. After a busy day of skiing, we would head back to the cabin each evening to use the sauna and to have dinner. I was so pleased to see a real northern sunset that, without even giving it a second thought, I ran outside in a thin towel and with bare feet into the snow (keep in mind, this was after the sauna, so my overheated body barely registered the change in temperature) to get this shot. Considering I sat in the library last week with wet feet and boots for several hours on a slushy, sludgy day, this was a vast improvement. 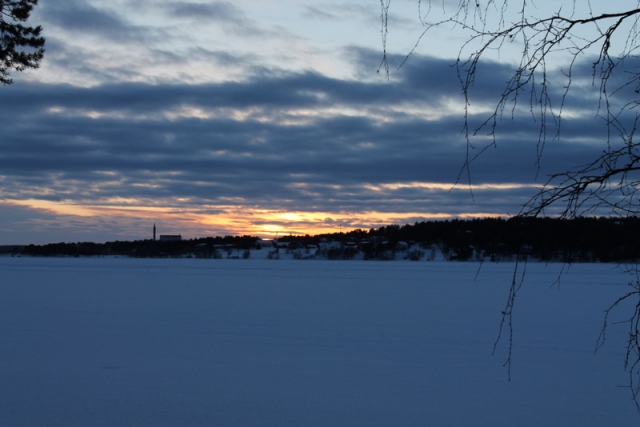 One thing that I tried and really enjoyed in the Lapland was Reindeer with Mashed Potatoes, topped with Lingonberry Jam. The reindeer meat didn’t necessarily have much of a flavor–it tasted like meat–but it did, while it was simmering on the stove, betray itself with its sweetly cloying smell.

Stuffed with this meal and feeling cozy after the sauna, I couldn’t quite bear the thought of putting on my skis again and heading into the village. So, while my friend and our other Lapland companion, a friend from school with whom she had studied Russian, skied to a bar in the village, I stayed toasty with the kerosene heater and read about Julia and Avis. I did, after all, have to be ready for the next day’s excitement: the long-awaited reindeer races and Sami Cultural Festival. The Sami are the Artic indigenous people that populate the northern regions of Finland, Norway, Sweden and the Kola Peninsula of Russia. 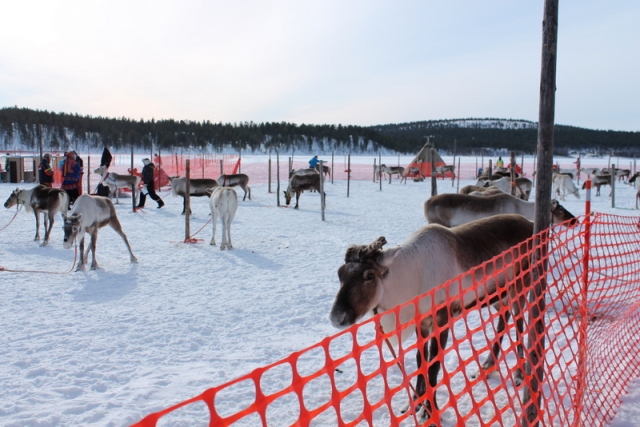 It was a festive day in the village with a Crafts Fair and an outside market. Although I would never ever buy the majority of this candy (don’t be deceived by the beautiful colors; it’s most likely licorice), I thought it made a pretty display. 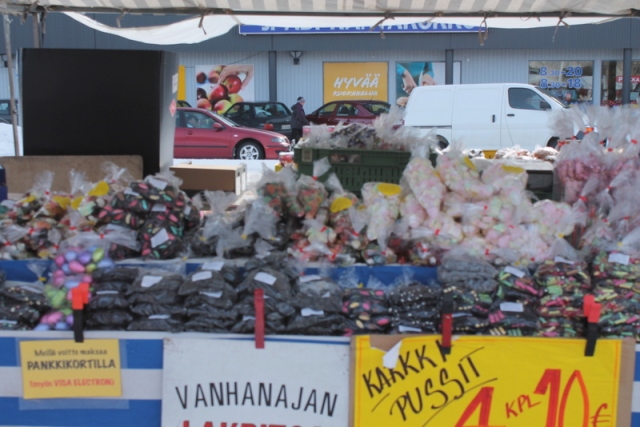 And there was an even better one of Finnish desserts–cream buns and muffins galore, not to mention cloudberry cheesecake– inside a local cafe, Cafe Silja. At night this place sheds its wholesome image and turns into a karaoke bar. It also makes a mean reindeer burger, which, although tasty, was essentially a hamburger with cubes of reindeer meat on top. This was a bit of a letdown since I had hoped for more of a “reindeer patty.” Then again, considering I ate this burger to classic Whitney Houston and other 80’s music, I was in a forgiving mood. 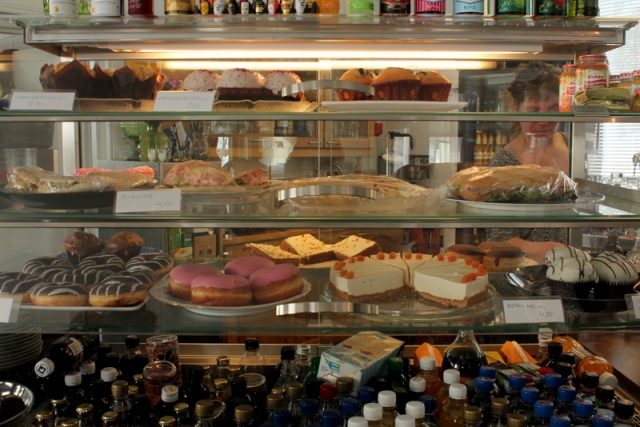 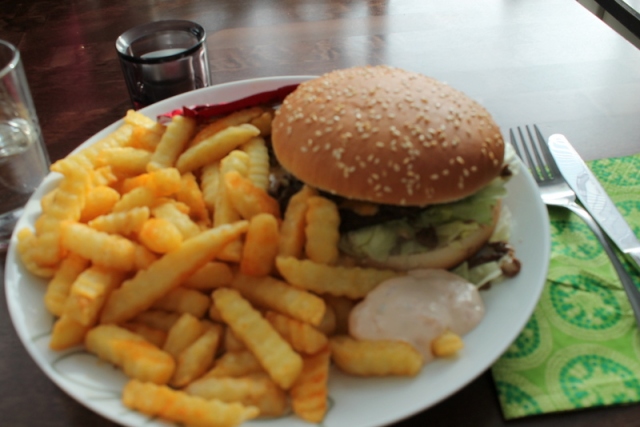 That night, in the village, there was the annual St. Mary’s Festival party, which was quite the event, held in a fancy hotel. The alcohol flowed quite freely and, since most of my evening involved people watching, I can promise you that the fact that some of these men were still standing by the party’s end was nothing short of a St. Mary’s miracle. But the few Sami I interacted with were quite open and very friendly. In some cases, perhaps a little too friendly, but I think this stemmed only from their surprise at having an American attend their party. They were as curious as I was.

In the presence of Sami, you really can’t help but be amazed by the brightness of their clothing. A small part of me imagines that the colors of their gakti (the clothes that they wear while reindeer herding or at festivals like this one) were a response to the landscape, a way of standing out and also of recognizing each other. 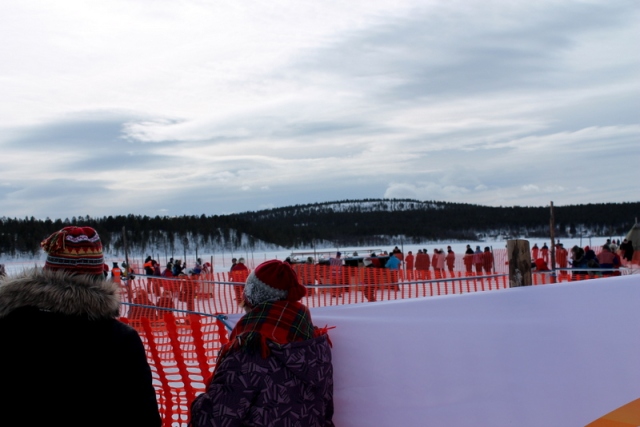 Okay, this little beagle has nothing to do with the Sami, but I photographed him for a solid few minutes because, with the snow covering his little black nose, he was nothing short of adorable. And, yes, I make no secret of the fact that I desperately covet such a four-legged creature of my very own.

Granted, this isn’t to say that I thought it was a good idea to bring dogs to a reindeer race. It seemed perhaps like a recipe for disaster, but, fortunately, all the animals seemed to get along.

And, in a shocking turn of events, I also vacationed with the royals, specifically Prince Albert and Princess Charlene of Monaco. There had been word before we left for Hetta that they would stop by the festival en route to Norway, but it seemed a little up in the air. However, true to their royal word and much to the delight of the villagers and festival attendees (there were more people in attendance the day that Prince Albert was scheduled to show up than there were the day before. Nothing gets people moving quite like the royals), they showed up. I don’t know what possessed me to photograph them like I did, but I see that the life of a paparazzo is a slippery slope. You are possessed by the thought of the perfect shot. Sure, they’re just people, but, when the cameras flash around you, it’s like you have no other choice but to snap.

They were in and out quite quickly, however. They watched a race or two and departed for Norway. Most of the locals then disappeared, having seen the highlight of the day. I would, however, disagree because what followed–the lasso competition–was more than a little impressive and certainly fascinating. This was the best photograph I had taken of the Sami; you can see why I said they brighten the landscape. And what I wouldn’t have given for a pair of those elf-like shoes made of reindeer fur. Uggs, fur or not, just don’t make the cut.

This was but a glimpse of the four days I spent there, but I came back to Helsinki feeling refreshed and happy. Maybe it was the skiing (endorphins), maybe it was the fresh air, or maybe it was just the recognition that grad school, despite my complaints, has brought a lot of interesting people and things into my life. Really, when I get right down to it, there’s no reason to complain at all. I do, however, still hold to my belief that real life happens outside the archives, but that’s a story for another day and post.

4 thoughts on “To the Lapland”