Being here in Finland, it’s fairly tricky. I’m happy the temperature was above freezing today and that the snow is melting; the downside to this, however, is that there are now crazy puddles to navigate (my legs are short; I’m practically doing Olympic style leaps across the street). Also, without ever having studied the language and knowing little about it (beyond the fact that it has 15 grammatical cases), I can say “hello” with no problem whatsoever. With one itsy bitsy little word, “Hey,” I can pose as a Finn…that is, until the barrage of language that follows attacks me. The jig is then up. But there’s another small problem for me with “hey”; to my ears, it’s hopelessly informal. Can I really say to somebody who is my elder by 20+ years and a complete stranger, “Hey!”? I can’t get over the feeling of being an impostor and so I just circumvent the difficulty by sticking to a “no-nonsense, I’m not in the mood to play games here” hello. Let’s also not forget that saying goodbye in Finnish is “Hey hey.” Somebody said this to me today and I immediately thought I had done something wrong; in English, “hey hey” is the equivalent of “just what do you think you’re doing?” Upon discussing my difficulty with my Finnish friend, she said that discontent might be expressed by three “heys,” or just one very drawn out “heeeeeeeeyyyy.” So, between me and you, I think it’s best that I avoid expressing any form of discontent while I’m here. Any and all frustration I have will be worked out in the kitchen. So, after experiencing such a moment, I went to the grocery store (my list was in Finnish; despite the confusion, I’m trying!) and then I cooked: Creamy Mascarpone Cheese and Lemon-Arugula (sitruuna-rucola) Pasta.

It’s been quite an adventure and none of it would have been possible without the help of Google Translate. After all, that chocolate milk I was crowing about in my last post? Yeah, that turned out to be coffee cream. I had wondered why chocolate milk would have 10% fat content…Good thing I’m a coffee drinker; it certainly won’t go to waste! The next trip was much easier…And more self-explanatory. Eggs are eggs, mascarpone mascarpone and, even without my growing Greek vocabulary, I’d recognize feta cheese anywhere (yes, while in Europe, I have decided that I’m going to help save Greece by buying products that specifically say “Made in Greece.” Why one economically ignorant humanities scholar can see that austerity is bad and the experts can’t is beyond me. But I digress). I was also amazed to discover that aioli comes in a tube here and you open it just as you would a tube of medicinal cream in the US. 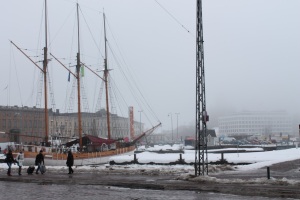 You might say the grocery store is, despite the occasional mix-up, my safe haven here, as well as a place of great interest. I’ve already tried things that are completely new to my palate (cloudberries!) and have seen a few other things that I will introduce to the blog–all in good time–before I depart in early April. For now, however, I’m sticking to a few things I know and love and this pasta dish just happens to be one of them. The Greek first made it for us back in January and, before my former office mate was leaving for her field work in Chechnya, we had her over for a pasta feast: we had not only Arrabbiata sauce, but the mascarpone pasta again. It really is a keeper recipe–simple, tasty and filling. I don’t know if it’s the combination of the lemon with the slightly sweet mascarpone, or if it’s the lemon zest and red chili flakes that make it so good, but whatever it is (the bitterness of the arugula, maybe?), it’s a treat for the taste buds. 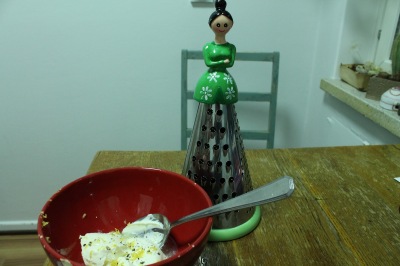 I need such food after a day in the archive. Although it’s easy work (hardly comparable to assembly line production), it can be plain tiresome. Thursday was spent looking for articles and images that a certain scholar cited and, as it would happen, though I was holding the volume she had footnoted in my two hands, I could find neither the image nor the articles in question. To add insult to injury, there were several other discrepancies that led to my wasting a good 3+ hours of my day. During such moments, I remember and appreciate why we are held to the almost impossibly high standards of my department. Documents must be checked and checked again; even the best ones will contain flaws, although diligence will prevent certain flaws from taking place. I am being cautious and, when I discover gems like these (“Quickly from the road!” with stereotypes of Russia, Japan and China; yes, my days are spent seeking racist portrayals of Asia by a Western power…the times have not changed all that much), I note the issue, the page number and a few details just in case. 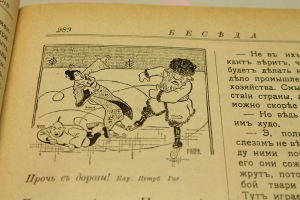 After such frustrations, I emerge from the library’s heated entryway only to come upon such scenes as these (it can be so foggy, it’s like I never left the Bay Area): 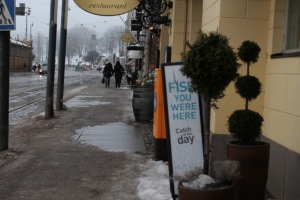 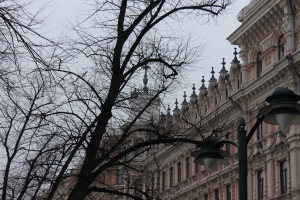 This is perhaps a small price to pay to the research gods. Especially when followed by a warm and tasty meal, some TV and conversation with my friend. Though certainly an understatement, I’ll say it anyway: there are worse ways to do research.

-In a large pot, cook pasta in salted boiling water until al dente.
-While the pasta is cooking, in a small bowl, combine mascarpone cheese, lemon zest, lemon juice, salt, black pepper and red pepper flakes.
-Once the pasta is done cooking, remove about 3-4 tablespoons hot pasta water and add to mascarpone mixture. The original recipe called for 1-2 Tbsps., but, as I prefer my pasta to be more wet than dry, I added more water (if you overdo it with the water, add a little more mascarpone to even things out). You want the sauce to coat the noodles completely. -Whisk sauce until smooth and creamy.
-Drain pasta and then pour into a large bowl.
-Add the arugula and toss to combine.
-As the arugula begins to wilt, add the cheese sauce and toss again.
-Serve and sprinkle with grated cheese (if on hand), and, if desired, more salt, red pepper flakes and/or black pepper.
-Reheats well and, even better, as I recently discovered, tastes just as good when cold.