For a while, what with all this moving and settling I was becoming frantic, schizophrenic, and even, perhaps, necrophilic, combined with anguish, frustration and ill-temper. But, finally getting into the book-work again, I find I work awfully slowly. There is so much that has been written, by people so much more professional than I, that I wonder what in the hell I am presuming to do, anyway.
-Julia Child (As Always, Julia: The Letters of Julia Child and Avis DeVoto)

I have arrived! In some way, it seems miraculous to me that this trip has happened–that it is happening as I type. This past week in Berkeley, I basically felt a mix of emotions: fatigue, agitation, worry; how was I going to manage everything? Amazingly, things fell into place (as they often do) and, despite waiting to pack until the very last minute, I think I managed to bring everything I needed. At the very least, I stocked my Kindle with the essentials: Agatha Christie mysteries, some classics, The Tiger’s Wife, pdfs of important documents and, as a last minute whim, the collection of letters I quoted above. And, although Lufthansa in-flight entertainment was nothing short of amazing (I finally saw both The Artist and, unashamedly, Breaking Dawn: Part I) I was happy to read about a project that came together despite a lot of naysayers and after many years of tedious, yet enjoyable work. Plus, during the 45 minutes I actually did sleep on the 10 hour flight, I at least had the pleasure of dreaming I was a piece of veal floating in the most heavenly cream sauce imaginable–you know, rather than feeling like I was a packed sardine in an itsy-bitsy tin, i.e. the equivalent of flying economy class.

When I got off the plane in Frankfurt, I was greeted with skies that were no sunnier than those I had left in Berkeley. In fact, there were several rude awakenings in store for my exhausted body: going through customs only to have to go back through security (I at least admired the German attempts at “serving with a smile,” which beats the rigidity of the TSA, an organization I would happily see stripped of all government funding). I then felt my inner-scrappy, -feisty, -cranky traveler emerging as a German woman cut me in line in the restroom. I vowed to beat her to the next available stall (Childish of me? Yes. Childish seeming to a me that had barely slept? Not in the least.), but then, as two available stalls opened–one behind me and one behind her–she ran for my stall and pushed me out of the way. I mouthed an extremely dirty expression at her, but only because I knew she wouldn’t notice. We had, after all, established that I was, at least to her, invisible. Fortunately, however, I was about to stumble upon a ray of sunshine:

Complimentary coffee and tea, courtesy of Lufthansa for its passengers. It was nice to see that this service was provided for all passengers, rather than just for those who have access to some courtesy lounge. Despite the draw of my most beloved of beverages, I went the route of herbal tea–if only so I could get some much needed rest on the flight to Helsinki. Fast forward several hours and, after a lovely meal of bread with rice porridge (Karelian pasties), fruit and Finnish ice cream (I don’t know how they make it so light and airy–it’s like a creamy marshmallow, but I love it), I passed out. About 11 hours later,  I woke only to the sun shining through the window. We had a lovely breakfast and then set out into the cold, but pleasantly sunny day.

The rest of the day was honestly one of the nicest and most relaxing Saturdays I’ve had in a long time. There was no chapter to worry about writing, no need to concern myself with the thought of packing or a long journey…No meetings to worry about. I just needed to avoid the ice, stay on my feet and take some photos.

We passed the sea, which, as it’s about 3 C (38 F) here (it was a warm day; when my friend met me at the airport yesterday, she told me spring was almost here since so much of the snow was melting), is frozen. Some Russians (surprise, surprise) were fishing. 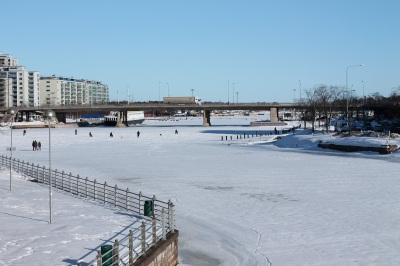 We also went to the Slavonic Library, so that I could get a preview of what was in store for me come Monday morning. It’s a lovely building–the one with the cupola–and, after seeing the research facilities, I can honestly say that, if you’re a Slavist in need of archives, why would you ever pass up this clean, lovely haven and go to Russia instead? Does it, after all, make sense to choose hard over easy?

Not that there aren’t perks to Russia–linguistic, cultural, even culinary (Georgian food is heavenly and I’ve also always had a thing for mayonnaise and sour cream)–but I think I’d take Finland any day. My first day here was spent walking around, breathing in the crisp, clean air and eating a delicious Finnish meal. I apologize for not having taken a photo, but it was the first truly warm meal I had had in the past 72 hours and I had to dig right in, not worry about shutter speed, ISO and aperture. Hunger possessed me and Cafe Bar 9 did not disappoint. It was simple, but hearty food, the kind that can be recreated at home, but sometimes just tastes better when it’s prepared for you. I’m sure I’ll try to recreate it in the US: penne with smoked salmon, spinach and parsley in a dijon-cream sauce with a slice of lemon. Just the thought of it is enough to reawaken my hunger.

Besides seeing a few churches (from the outside only) and spending more than a little time admiring the beautiful, pristinely white Main Cathedral, I also went to see The Iron Lady. Meryl Streep was, as always, a revelation, but the movie was your standard reexamination of a political figure and era meant to make you wonder if we haven’t learned history’s lessons and are now needlessly repeating its mistakes (austerity, labor unions, stubborn politicians who fail to listen to the people). Best of all, I got to sample some Finnish candy. As my friend told me, “This is a candy country.” More reporting on that later. In the meantime, I leave you with an image that goes against my typical blog policy, but, you know, a girl gets to travel only so often. And, in Berkeley, I don’t get to wear many of my lovely scarves. I embrace this opportunity to showcase them. 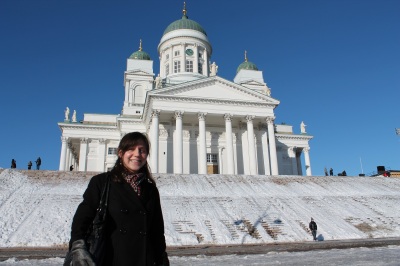 4 thoughts on “Happy in the Snow Heap”