As we cooked our way through that stack, I discovered interesting shifts
in the way Times readers have approached food. Desserts experienced a major renaissance during the 1970s, as the writers served up ambitious cakes, extraordinarily sweet American pies, and a novel concept called the French tart. Pastry chefs then cut back on the sugar and moved away from these monolithic, Wayne Thiebaud-style desserts to heavily constructed individual servings. We ate a lot of duck in the 1990s and none at all in recent years…We learned to cook pasta and sauce it properly, and to roast vegetables, but we left a lot of great Germanic foods like goulash and spaetzle by the curb. -Amanda Hesser (The Essential New York Times Cookbook)

My cooking method is by no means static. Sometimes the ingredients will pick me  (who can say no to in-season clementines and golden beets, after all?). Some weeks I’m in search of the perfect recipe, while, during others, they just happen to fall into my lap. While I’d certainly be the the first to admit that I’ve got more than enough cookbooks (the area of the dining room I’ve christened “Cookbook Corner” is out of space already), the truth is that I often get a lot of inspiration not only from fellow food bloggers, but also from The New York Times. To be honest, I don’t know how many times a day I check the newspaper (probably more than I should, especially when I hit a writing rough spot), but I also love seeing what their resident food writers are whipping up. Melissa Clark’s column, as I’ve noted before, is a favorite of mine and her recipes are both simple and inventive. Mark Bittman, the Minimalist, is always good for demystifying certain food items and giving you a great idea for a quick and satisfying meal. And Martha Rose Shulman, whose column I often turn to for inspiration, is all about healthy Mediterranean cooking. I sometimes think that, with the help of the New York Times alone (and the cookbooks it’s helped to create), I could never run out of things to cook. 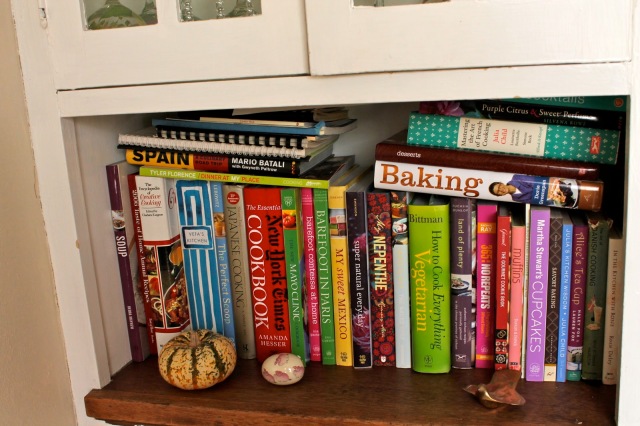 It’s especially helpful during busy weeks. I’ve discovered that, now that I’m no longer a household of one, meals take a little more thought; it’s no longer just about pleasing my palate and my ability often to be satisfied with nothing but a simple salad for dinner. The age of dinner for two has dawned and I’ve got to be a little more experimental. Fortunately, I have a lot of new kitchen toys to help me out. For one, my spaetzle maker, which is a revolutionary little tool that makes dumplings for dinner seem like the easiest thing in the world. I had a lot of fun using it, although I will say that, when I first saw Melissa Clark’s recipe, it somehow slipped my mind that a) I always think I’m going to enjoy caramelized onions a lot more than I ever actually do (while I appreciate their aesthetic value, especially when purple and placed next to a sprig of thyme, onions, particularly raw ones, repulse me) and b) I’m not all that crazy about Swiss cheese. Just another way for the universe to tell me that recipes are often a suggested model, not an absolute set of rules. 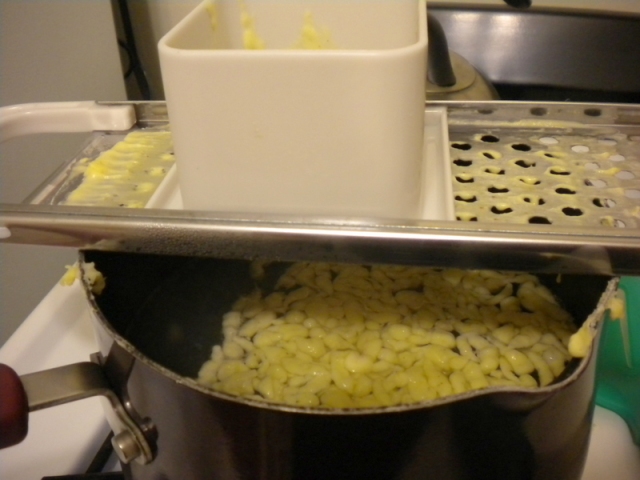 I took that advice to heart with my next cooking with the Times adventure of the week:  Mark Bittman’s delicious looking tofu curry (yet another recipe that relies on browned onions–I assure you that their taste is infinitely more tolerable when covered with curry powder and coconut milk). On a greens kick, I felt it wouldn’t be right not to include broccoli. In possession of a few extra mushrooms (left over from the spaetzle), I thought they’d add a nice touch. It was a flavorful curry, but one that both the Greek and I agreed was in need of a little Sriracha. And voila; a meal made and back to work. These days, dissertation writing and Greek translation are always waiting in the wings.

My next endeavor was obvious; it was as if, all those months ago when I had bought a box of Israeli couscous, I kept putting off using it because I knew something would come along that would rock my couscous world. And, yes,  I did use more cheese than Martha Rose recommended (a clear given; most recipes always need just a tad more cheese. Best of all, my kitchen scale does not lie and tells me just how bad I’m being; .35 ounces over is a small sin in the world of “recipes for health,” however!). I also used a fairly decadent and creamy goat milk yogurt for the dressing, which, considering the healthy goal of the recipe, is perhaps sacrilege, but, to put it mildly, a little fat goes a long way. Especially in these dark and chilly times.

You see, the sky has recently been looking a lot like this (see the photo below, which, thanks to the new camera below it, is a crisp and accurate view of the world beyond our living room windows). A few nights this week the fog has been nothing short of remarkable; the rain, too, at least earlier in the week, was a force to be reckoned with. At such moments you discover just how non-waterproof the majority of your clothing is; you also, if you’re like me, might learn the hard way that the shoes you just paid to have fixed have sprung a leak.

The good news about coming home with wet feet is that you can seek out a recipe for a warm cocktail to take away the chill. I turned to the Essential New York Times Cookbook for help in making this decision; the recipe for hot buttered rum jumped out at me. What could be better suited for curling up on the sofa under a warm blanket than a spice-infused rum with a sliver of butter that lends a smooth finish? It just might, in my book, give the hot toddy a run for its money.

-Combine the rum, sugar, cloves and nutmeg in a mug.
-Pour in the boiling water.
-Add the cinnamon stick and the sliver of butter.

-Sip slowly and savor the warmth!

3 thoughts on “My Week with the "NYTimes"”