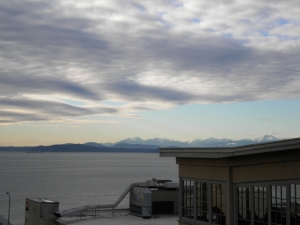 Every day she got up, tucked her three cookbooks under her arm, shut herself up in the kitchen and cooked, listening to Vivaldi. The books were Elizabethan Cuisine, Plato’s Symposia, and Renaissance Spices and Sauces. At night they all traveled together with their sense of taste: as they chewed they would become ancient Greeks eating light but complex dishes, would feel like barbarians from the Middle Ages as they tore into bloody meat, or would seem to hear the strains of a mandolin as a scrap of some strange herb stuck in their teeth. Each night was a surprise; they came not for the food, but for the taste of an unfamiliar age–and because only then, around the table, did they finally feel they had arrived somewhere.
-Margarita Karapanou (The Sleepwalker)

As soon as I stepped out of the LightRail station in downtown Seattle this past Friday, three things struck me: 1) it was a gorgeous downtown with lots of old buildings, 2) it was positively cold–cold enough for wisps of my breath to linger in the air and 3) I felt exhausted and couldn’t help but ask myself why in the world I had decided to go to this post-holiday conference where I knew all of two people in a crowd of thousands? 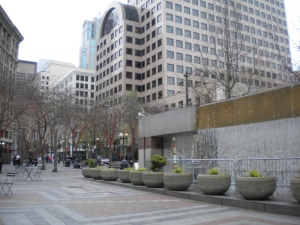 Luckily, yours truly is an optimist at heart. Despite my misgivings about the whole affair, I was there and I was going to make the best of it. But as soon as I stepped into the hotel–the swank Downtown Seattle Westin (although a nice hotel, I still can’t help but wonder why every Westin in the world has to jut into a city’s skyline in an incredibly unappealing manner?)–I realized that, for my sanity’s sake, I was going to have to spend minimal time there. I could smell the academic desperation, the worry, the fatigue, the need to make a good impression and have your fellow academics think you’re nothing short of brilliant so that you–and you alone out of the masses–can get that one elusive tenure-track position. Maybe you think I’m exaggerating, but the lobby was full of suits (and tweed ones at that) and it all felt a little overwhelming. So, I took my bag upstairs, grabbed my camera and off I went for a little exploring. The concierge pointed me in the direction of Pike Place and I soon found myself tempted by the spicy Mac and Cheese at Beecher’s. Why I went for the spicy option I’ll never know, but something told me that I was going to need something a little sweet and creamy to take the edge off of the spice. Without even realizing that I was stepping into an acclaimed Seattle bakery (call it my sixth food sense that always made my brother wish that he had ordered what I had on the menu), as soon as I saw the offerings, my mission was clear: one slice of Triple Coconut Cream Pie to go.

Really, between the spicy mac and cheese and the pie, I don’t know what was going on with me. It was like my food palate was completely out of whack. But I do know this; that coconut cream pie was the lightest and fluffiest cream pie I’ve ever had. The toasted coconut and white chocolate ribbons on a bed of whipped cream were a simple addition, but one that really made the pie stand out. Best of all was that, after I returned to the hotel with my lucky finds, I didn’t go out for the rest of the night. 5 hours of television (Temple Grandin is an amazing accomplishment of story-telling) and one phone call from the Greek later, I got a much deserved good night’s sleep.

Saturday was my nicest day at the conference. Not every conference experience allows you to sleep in and then head to a cute Italian cafe, Bacco, where you have a leisurely breakfast of ratatouille and and a large coffee to start to your day.  I did decide, however, that I needed to follow up my evening of TV and idyllic morning with an appearance on the conference scene. I had decided that I would attend a panel on “Russian and Soviet Food Culture” (I felt it was an appropriate and interesting topic) and, after three talks–one on poetry in mayonnaise, one on Soviet hot-dog making (a study of Boris Pil’niak’s 1936 novel, “Мясо” [“Meat”]; you can see a poster that the speaker passed around below. Apparently, in the Soviet Union, hot dogs were in great demand!) and another on Soviet crockery–I felt rather inspired. It was wonderful to see that this kind of work was being incorporated into Slavic studies, which can often feel like a continuous study of the Russian “giants” (Tolstoy, Dostoevsky, Pushkin, Gogol, and rinse and repeat); food, after all, is an important part of culture and, by examining it, one can see trends that were dominating other facets of life. While a fellow scholar, when I mentioned the panel to him, said that he didn’t really think this kind of work could go anywhere, there is actually a book on the topic, which was written by one of the panelists: Recipes for Russia.

The rest of my day passed in a blur of Seattle sights. I saw, from afar, the Space Needle, and, in my quest for good Seattle food, I walked to the Capitol Hill district, where I had what may be a perfect symphony of a sandwich at the Honey Hole, which is clearly a hipster’s dream come true.  I ordered the Bellissimo, which had a Smoked Tomato grain meat, red pepper mayo, banana peppers (again, I went for spicy food; I think the fact that I was freezing in Seattle had something to do with it. I was channeling heat) and other tasty things on a baguette. And then, again in search of dessert, I walked a few blocks and stumbled upon a cute cupcake place, Cupcake Royale. Essentially a pastel pink palace with the scent of burnt sugar lingering in the air, I couldn’t help but go in. Perhaps I was making up for my pie sin (I am in Camp Cake, remember?), but I couldn’t leave without buying a cupcake–specifically, a Lavender one (I was tempted by “the Kate”–chocolate cake and pink buttercream frosting–but there wasn’t anything all that gripping about it besides its connection to the world’s most famous Duchess). While some cupcake places make good frosting, but the cake leaves much to be desired, this was basically the ideal cupcake: the cake could hold its own, even as the frosting, due to the floral notes of lavender, stole the scene. Needless to say, before 5 p.m., I was nothing short of stuffed.

This didn’t stop me from venturing out to Chinatown with my fellow panelists and a friend of theirs from UChicago on Saturday night. Over shrimp soup and fried tofu, we talked about Lust, Caution and modern Japanese prose. There was also, as there always is, a fair amount of academic gossip. Just between us, it was itself the stuff of novels. 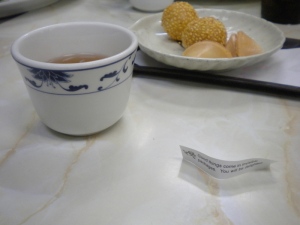 And then it was Sunday, or, as I was imagining it (as I always imagine the hours leading up to a conference presentation), Doomsday. There’s something about getting in front of people and reading your ideas about a text that frightens me (it is, after all, what I’ve always liked to call “academic nudity”), but it’s just got to be done. My nervous state was exacerbated by my fears about the paper; since my presentation was a section of the chapter that had been critiqued in the early fall (remember all those green beans?), I felt sure that somebody was going to ask an impossibly hard question about the history of the geisha or Salome and Orientalism…but, as so often is the case, nobody asked my most dreaded questions. 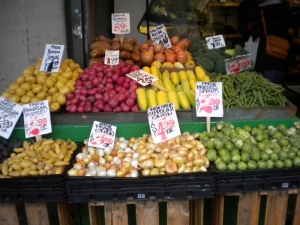 Instead, I would say that both the paper and the panel as a whole were a success. Yes, I was presenting to an audience of three people; yes, the discussant, like my dissertation adviser before him, wanted to know less about the French context and more about the Russian one. But these small things aside, people liked the paper and offered interesting feedback; and, for the first time in my conferencing career, I felt like there was a real dialogue and discussion during the Q&A instead of a monologue by an overbearing discussant or, in some cases, a particularly opinionated audience member.

The rest of the day was spent revisiting Pike Place, looking at the many delights in the shop windows and the lovely produce stands that give the market its reputation and unique character.

It was the first day that the sky was not perfectly grey; amidst the puffs of clouds, I could see some blue peeping through. 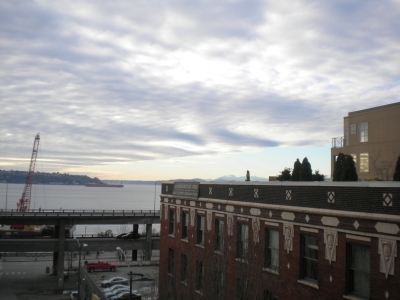 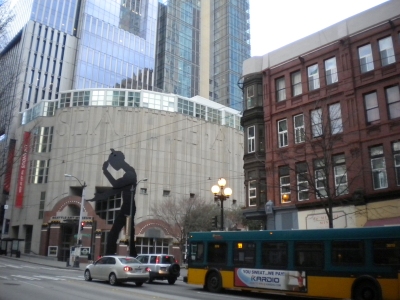 I went all the way to Pioneer Square and back, passing the Seattle Art Museum and looking at an installation (yarn bombing, it’s called) that made me feel like I was walking through one of Dr. Seuss’ colorful books. 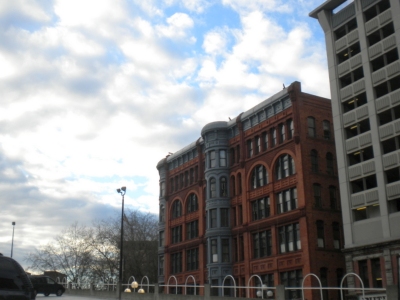 And in typical me style, I ended my trip with a big old scoop of ice cream, courtesy of Molly Moon’s. Surprisingly, I wasn’t as crazy about the Salted Caramel as I thought I would be (it was all salt and too little sugar), but the Vivace Coffee, with its bittersweet taste (and the occasional crunch) of ground coffee beans, was a winner. 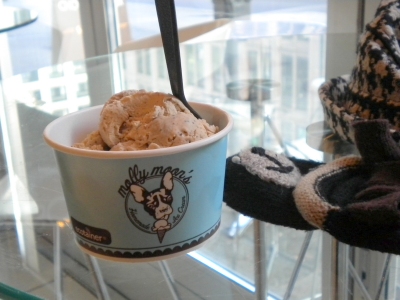 If I had to go anywhere for a conference a day after returning home from the east coast, I’m glad it was Seattle.

5 thoughts on “Seattle, Sweet and Spicy”