Last night I dreamed that a great monster was riding on me and bawling: “Giddup! I am called the Pneumatic Inhaler, did you know? And I adore riding on writers!” I asked him: “You, Sir, are not a publisher or a censor?” I am one of those extinct monsters in Hutchinson’s book but–although I am not literate I can be a censor!” Well, all night he rode me through some strange glades–he said he was a patriot–he and I collected hats to throw at the Japanese. -Maxim Gorky to Leonid Andreev, 1904
I can’t even begin to tell you how gleeful I was when I read this passage last night. Not only is it a rich and crazy dream, but it’s also quite the find for somebody who’s tracing responses to the Russo-Japanese War in literary circles…and this wasn’t even the best thing I found! That, my friends, was a few pages later–a newspaper clipping I will perhaps do my best to find when I’m in Helsinki in March. To be honest, I don’t know what will come of all these random moments that I’ve been discovering in unexpected sources, but I think that I’m cobbling together a document that will, at the very least, be fun to read, as well as informative. And if such discoveries do not a career make, well, I just learned how to roll sushi. I am, however, still a novice (the rolls featured in the above photo were rolled by my lovely office mate, who, because of her “exotic” appearance to German diners in Leipzig–she’s from Chechnya–got a job as a waitress at a sushi restaurant. She can now not only prepare numerous types of sushi, but also roll it in less than 2 minutes.).  But first things first; we must progress chronologically. 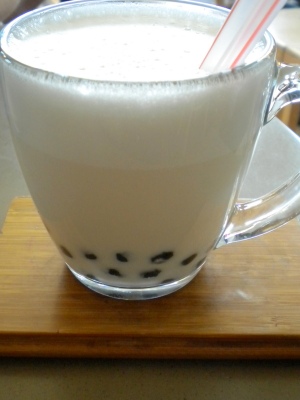 Last weekend, before I ever even attempted to make sushi, I was hanging out with a friend of mine in my soon to be old neighborhood. We went for tea (I had my usual Coconut Bubble Tea), then stopped by my favorite store, The Bee’s Knees, where two whole racks of clothing were on sale for $12 each. I bought one thing, she bought one thing and then we went back to my apartment to bake something. Since we’re both fans of coconut (do you see a theme here?) and coconut and chocolate go so well together, we decided on Coconut Bars from the Gourmet Cookie Book. Because I didn’t take many pictures and, more importantly, because as soon as the last of the natural light fades from my kitchen, my camera, much likes Cinderella’s carriage, turns into a pumpkin, I’m providing a link to mouthwatering pictures of (and recipe for) the bars at the lovely honey & jam. The only thing we did differently was to add about 1/4 cup of chocolate chips. And the bars were better for it, even if, yes, because of its melted gooeyness, the chocolate compromised their structural integrity.

Then, this past weekend was practically bursting with food. And really good food at that.

The Greek and I found ourselves in San Francisco early on Saturday before we were heading off to respective dinners with college friends. He had a coupon from livingsocial for The Urban Tavern, which I had had no idea was associated with the Downtown SF Hilton and would therefore be quite fancy. Never one for too much pomp–I like good food, but, as I’ve said before, the mannerisms that sometimes accompany it border on the ridiculous–I ordered a cocktail and cheeseburger. Both were quite good and off of the restaurant’s “Lounge Menu”; the cocktail, a Midnight Lavender, was inventive–a combination of lavender syrup, limoncello, champagne and blackberries–and the cheeseburger hit the spot. 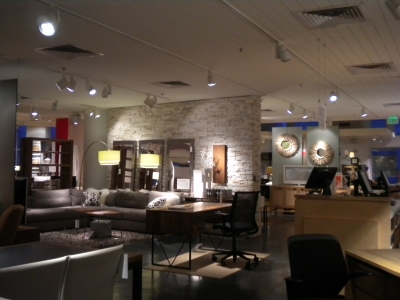 We followed that with some “window” shopping in Crate & Barrel. So many amazing things crammed into one store–wall decorations, rugs, bedspreads, lamps, home bars, etc.! If money were no option, many things would now be sitting on the floor (along with the free wooden rocking chair and countertop dishwasher we managed to snag) of my quickly becoming overly cluttered (which drives me crazy) apartment. Now that we’re moving in together, we need to find a way to merge our two very different decorating styles. I like frilly things–antiques, interesting patterns and bright colors–while the Greek prefers something a little more austere–clean lines and dark colors, i.e. the anti-frill. Perhaps another trip to Crate & Barrel will be in order, especially on Black Friday. If nothing else, we at least need a new bedspread, one that doesn’t have flowers on it.

After our shopping extravaganza, which was, despite the crowds, a very relaxed way to spend a rainy Saturday afternoon, I headed off to dinner with my college friend at the Zuni Cafe. I kid you not when I say that I’ve wanted to go to this restaurant for years; the restaurant’s cookbook is gorgeous and a classic. I nearly died of happiness when I was house-sitting for a professor the summer before last and his wife had a copy on her bookshelves. I would eat dinner, thumbing through the possibilities for the next meal. And I’m happy to say that the restaurant lived up to the expectations that the cookbook had created. The service was friendly and fantastic and the appetizer (squid) and the salad (chicory with pomegranate seeds) were delicious. But that doesn’t cover the entree, which my friend and I, in between grad school gossip and dissertation complaints, quickly decided on: The Roasted Chicken for Two. It comes with a bread salad with currants, pine nuts and mustard greens and you have to wait an hour for it, but it. is. worth. every. minute. I immediately came home and, while finding my page in my recent obsession (The Girl with the Dragon Tattoo! I can’t read the second one, however, until I’ve written 10 pages and moved into the new apartment..Yes, people, the system is entirely Pavlovian…and it works!), searched for the recipe online. Naturally, Smitten Kitchen, having made every recipe known to mankind and then some (I say that with admiration and just a dash of envy), was the top hit in my google search. Try this recipe. Quickly. Now. The Greek agreed with me since he got to try the leftovers; half the beauty of ordering chicken for two at a restaurant means there’s actually chicken for 4 on the platter.

The rest of my weekend was similarly inspired in a culinary kind of way. The Greek and I had done a little pre-Thanksgiving grocery shopping on Friday and, on a whim, I picked up a bag of cranberries, not quite knowing what I would do with them: cranberry sauce? A farro salad with brussel sprouts? Given my impatience and need to experience the holiday spirit, I couldn’t wait for Thanksgiving and opened the bag on Sunday. Oops. But I can tell you that the cranberries, sprinkled with sugar to help them overcome their natural acidity, make a lovely addition to the baked oatmeal I was raving about this past summer (courtesy of Heidi at 101 Cookbooks).  It definitely beats eating them raw–they’re much too tangy, even for me, and I’m a person who loves all things sour.

And, finally, sushi night with my office mate! It was truly amazing to watch her make the rolls and to whip up the ingredients. She did it with such ease; it was yet another fine example of the age old wisdom: practice makes not perfect, as my high school history teacher liked to say, but permanence. 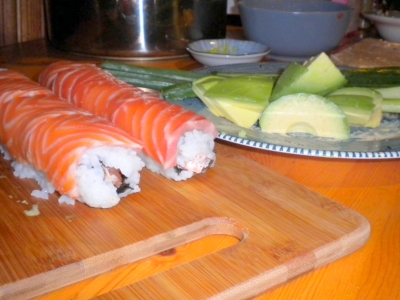 Sushi isn’t hard to make per se, but it’s not exactly easy either. But she did show me a few tricks and we made a ridiculous amount of sushi–spicy tuna, smoked salmon, salmon, California rolls.  While hers were tightly wrapped, mine were a little loose. Whenever we would transfer them from the bamboo mat to the plate, I’d inevitably lose a piece of avocado. We’ll see what happens if and when I ever get around to making my own rolls.

And, of course, we had some dessert since her birthday had been the previous day. I took her some Cranberry Walnut Tart from the lovely Cafe Nefeli near her house and she had bought some an-pan, a Japanese sweet bun filled with anko (red bean paste). It was a nice way to end the weekend and start the week.

One thought on “Food Montage”