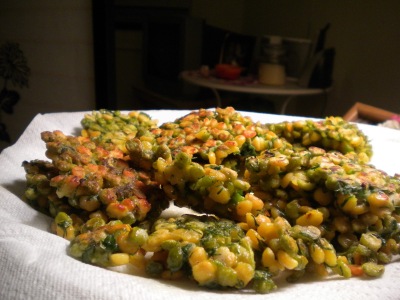 When we eat alone we often break all the rules surrounding not only what to eat but when to eat and even where. And this is true regardless of what we know about cooking or about what makes a proper meal…Solo meals can be all corn and tomatoes if that’s what you like. Solo meals are different, surprising, and they can also be funny, but sometimes predictable.        -Deborah Madison (What We Eat When We Eat Alone)
It’s not often that I present a recipe to you that I’ve had not one, but two opportunities to make in one week. In fact, since I started this blog, there are few things I’ve had the chance to make again and again. Then again, as it’s impossible for me to update this blog on a daily basis, there is much about my culinary life that doesn’t quite make the cut. And especially when I eat alone. There’s something about the ritual of eating alone, of cooking for one, that seems both inherently private and slightly sacred. For me, when I’m “cooking” for one during the workweek, I’ll often combine crackers and hummus with a filling salad packed with garbanzo beans, feta cheese, cherry tomatoes, walnuts or almonds. I’ll eat on the couch and often in my pajamas.  While perhaps a bad habit, the kitchen table seems to be reserved for my meals with the Greek, or when I have guests over. On my own, I usually can’t be bothered with the (false) formality. But there are also other nights when I’ll pour myself a glass of wine, light a few candles and set about making myself what many would consider to be a decadent meal (like when I cooked on Friday night and not only cracked open a coconut, but cracked open a coconut while ghee was forming in a saucepan on the burner; yes, stay tuned!). While I’m not quite sure these split pea cakes (or fritters) qualify as a decadent meal, they’re certainly a nice alternative to the crackers I typically favor.  Even when cooking for one, variety is key. 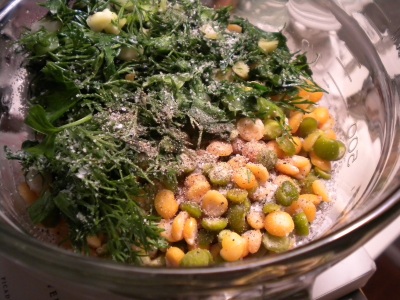 I found this recipe in Authentic Greek Cooking and, given my love of split peas (particularly split pea soup–as I’ve mentioned here before, Alton Brown’s curried split pea is a favorite of mine), I knew I had to make it and soon. Opportunity struck last Saturday–the same day I baked the fateful cake–when the Greek and I decided to have a simple, yet somewhat elaborate dinner at my place since he would be spending the week in Seattle/Vancouver for a conference. While he made mackerel (one thing I like about the picture below is that it’s all about the eyes, from the fish’s eye–a sad sight, to be sure–to the dog’s eye–where I keep my glasses; an object I inherited from my great-grandmother and namesake–that peeks out from below the Pyrex dish), I set about making what I knew could only be a richly flavored–fresh dill and parsley guarantee this– and textured fritter. In short, the perfect accompaniment to fish with tomato sauce and lots of fresh herbs. 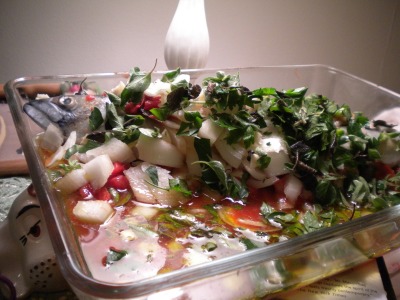 The recipe was simple and straightforward, although I will say that I was a bit perplexed by the fact that it said to cook the split peas until they were firm and then to mash them with a spoon. I took not only a spoon, but also a lemon juicer (one of the firmest objects I have for crushing things; sadly, I lack a mortar and pestle) to the firmly cooked peas and they were not giving. Not one to be easily deterred, but also not one who wants to injure one’s hand in a losing battle, I decided that firm peas would do just as well and that they could actually lead to something better…Why not embrace the split pea–both yellow and green; I was in a colorful mood–in all of its glory? 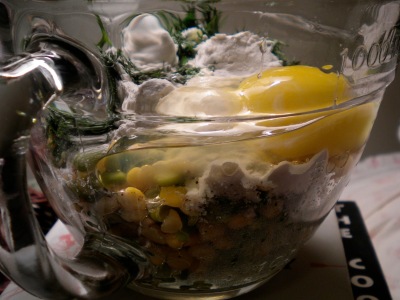 Luckily, my instincts didn’t fail me. The cakes were crispy–not overly chewy. And they held together beautifully despite the weight of the unmashed split peas.  The mixture of lemony parsley, earthy dill, spring onions and garlic transformed the somewhat grainy flavor of the split peas (personally, as much as I love split peas, I often feel that they’re a bit like tofu–they’ll generally taste like what you mix them with. It’s their texture that really stands out) into something both surprising, yet easily recognizable. That’s when you know you’ve done something right in the kitchen; despite the presence of strong supporting “actors,” the integrity of the main ingredient is on full display and remains the highlight of the dish. 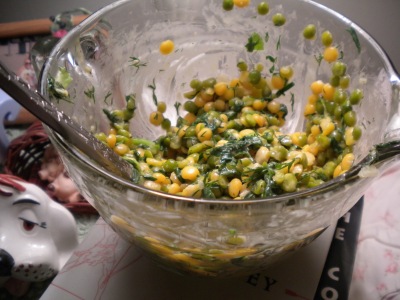 Best of all, I had boiled so many split peas–enough for a double recipe–that I was able to return to the recipe and try it again later in the week. The second time around, I decided to grind the split peas in the food processor first, which led to more of a pancake/vegetable cake-like texture (the photo from Round Two is below). Also, having been too lazy (it was a Tuesday night, so the fatigue of rising at the crack of dawn was still with me) to chop up a clove or two of garlic for this batch, I can safely say that you don’t want to skip the garlic. It really adds something. But with or without garlic, I was more than thrilled to discover this recipe. It keeps well, it provides leftovers and, with minimal work, it takes my weeknight standby salad to the next level. And that’s enough for little old me.

What do you eat when you eat alone? Do you splurge and make something decadent? Or do you stick to your old favorites? 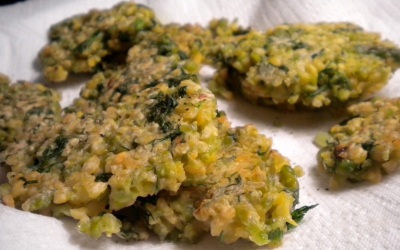 -Cook the split peas in salted water until they are firm, but chewy.
-Set aside and let cool slightly.
-Heat the olive oil in a frying pan and lightly saute the onions and garlic.
-Once they’ve softened, add the parsley and dill and saute for a few minutes on low heat.
-Remove from heat and let cool.
-Mix all the ingredients with a spoon in a large bowl until you have a thick mash (N.B. The first time I made this, the split peas were too firm to be mashed by hand. The cakes, however, still held together and I enjoyed the chewy texture. When I used the rest of the split peas a few nights later, I put them in the food processor first, which broke them up and led to a thicker mash.)
-Heat more olive oil in the frying pan and fry the cakes until they are lightly browned on each side.
–Serve alone or with a small salad. They’re delicious with feta and tomatoes and a balsamic vinaigrette.

5 thoughts on “Happily Frittered, or Why Split Peas Aren’t Just for Soup”