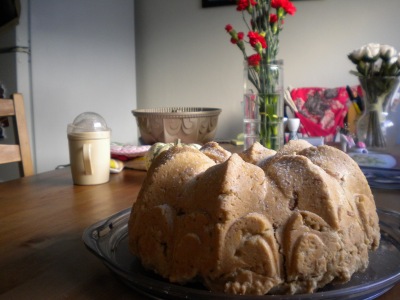 I have a Castle of Silence, flanked by a lofty keep,
And across the drawbridge lieth the lovely chamber of sleep;
Its walls are draped in legends woven in threads of gold.
Legends beloved in dreamland, in the tranquil days of old.
–Daniel O’Connell

Although I enjoy cooking, baking is my true passion. Cookies, cakes, breads, cupcakes, muffins, scones, sweet bars, cream puffs (the first thing I ever baked on my own), souffles, cobblers…These are the things that send me into the kitchen in a frenzy of excitement. I approach the whole process with something bordering on reverence: I measure with precision and I use quality ingredients. Most importantly, I’m never unwilling to sacrifice a few hours on a Saturday or Sunday morning if it means that something sugary, crumbly and delicate will be waiting for me on the other side.

Which is why I was so excited when I saw a cake recipe of the Greek’s grandmother’s in the cookbook his aunt had sent for me. The whole recipe–from the tahini to the brandy–suggested baking gold; even though it was a fasting cake intended for Lent (essentially vegan), I figured that due to all the liquids going into the cake, combined with the addition of orange zest and juice, cloves and nutmeg, this cake couldn’t be anything but moist, softly spiced and rich. On some level, I think I was envisioning a cake-like halva  (since my favorite Russian candies are the sesame-paste ones dipped in chocolate, you can hardly blame me for having this fantasy). I even had the brief idea that I should add chocolate chunks to the cake, but, after I tasted a little bit of the sugar-tahini mixture, I decided that dried fruit, particularly the much-despised and mocked (but nevertheless elegant) prune was the way to go. Especially as it preserved the cake’s essence–to be eaten during a period of Fasting.

But I should mention that I was a bit flabbergasted when I did the conversions for the recipe (it was in metric) and saw that it took no less than eight cups of flour and four of sugar, but only 1 tsp. baking powder. I had the brief thought that I should maybe triple or quadruple that amount, but assumed that if the recipe called for such a small amount of baking powder, then maybe it really did take such a small amount of baking powder (who am I, a mere American girl, to question a recipe for Greek cake written by a Greek woman and published in a bonafide cookbook?). After all, I’ve questioned a recipe’s instructions in the past only to be pleased and smitten with the final result. Why should this have been any different? 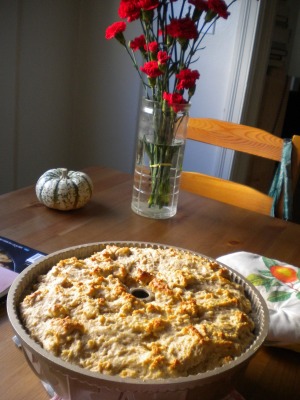 I should also mention, however, that this particular cake pan appears to be cursed. Several years ago after a haircut in Emeryville, I stopped by William and Sonoma to buy a bundt-cake pan. In the midst of preparing for my Master’s Exam, I had gotten it into my head that I was going to make a Pound Cake when the whole ordeal of reading Pushkin, Gogol and every other Russian author out there was over. That day quickly came, I passed the exam (as the majority of us do) and I set about using the loveliest cake pan I’ve ever known. When I went to take the cake out of the oven (that is, after the fire alarm went off), I saw that it had literally exploded from the pan. Half the cake was being scorched at the bottom of my oven; half was still in the pan, a gorgeous and fluffy yellow–much like butter that has been creamed with sugar, just a little more spongy. Naturally, I was devastated; although I am nothing if not a modest, humble individual, I take pride in my baking; it’s where I’m at my most creative. Plus, due to my neurotic care and attention to detail, most recipes I attempt to make turn out. Clearly, just not when I bake them in this pan.

The above cake, the Greek’s grandmother’s recipe, was no exception to this rule. Although you would think, based on the pictures I’ve posted, that it came together somehow, you’d be wrong. I used a cake tester; it came out clean. I sniffed the cake; it smelled heavenly. I gently turned it out of the bundt-cake pan and it held together. I was so tempted to cut myself an itsy-bitsy little sliver after it came out of the oven, but decided to wait for the Greek and to eat something healthy–like a salad–for lunch instead….So, after dinner on Saturday, when we went to cut into the cake, the first sign of trouble appeared when the knife didn’t seem to want to go in. I felt like I was trying to cut into a rock. I gave my slightly “I’m nervous, but a little-brute-force-never-hurt-anything (non-living) smile” and forced the knife through the cake. And I was faced with a half-done cake: a perfectly solid exterior masking a soggy, alcohol-reeking interior (the recipe called for one wine glass of brandy). In short, what had once seemed like baking gold became my baking nightmare (I always worry when I’m taking a cake to somebody’s house that this will happen…but there’s no way around the fact that an already-cut cake is like spoiled goods). My face fell and the Greek started talking about another try and the need for more baking powder/soda and expansion rates…And I will try again (when my baking pride recovers), especially since the few solid, fully cooked bits (the top and bottom layer only) were truly delicious. Next time around, I’m adding chocolate, and enough baking powder and soda to make the cake potentially explode in my oven. Best of all, I’m buying a new bundt-cake pan; the curse must (and will) be broken.

And, because I won’t be providing you with this recipe–or any other– just yet (it will resurface on the blog at some point), I’m instead giving you some photos from yesterday’s adventure at a Serbian Orthodox Church in San Francisco (it was quite the experience; I had never been to an Eastern Orthodox service before) and from our drive across the (always foggy) Golden Gate Bridge to Sausalito, where we enjoyed what may very well have been one of the nicest fall days we’ve seen in the last week. Flowers and pumpkins galore…And Fleet Week, too! If there can’t be cake, then let there be sunshine! 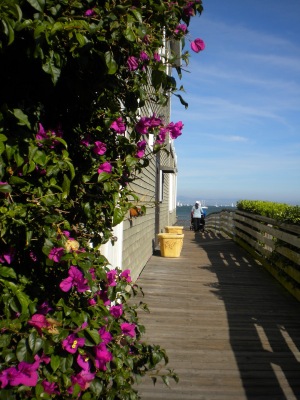 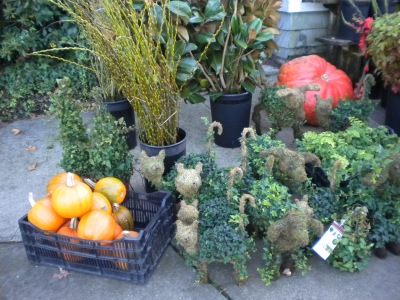