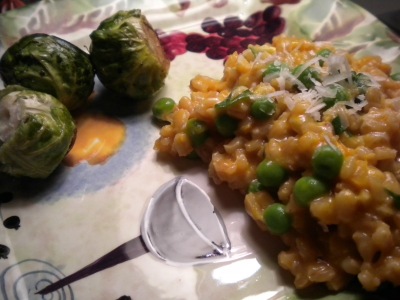 Moments of hopelessness should always be transformed into creation.

But why?
And for whom?
-Margarita Karapanou

In this particular case, I can tell you the moment of hopelessness that has inspired my own act of creation: the fact that I’m grading, grading and grading. And somehow, despite my labor, the pile of essays doesn’t seem to be dwindling. I can tell it’s going to be a late night. *sigh* Even better, I can tell I’m coming down with a cold. *double sigh* Fall, with all of its germs, chilly air and rain, is officially here! In my mind, this is an excellent reason to tell you all about the barley risotto I made for the Greek’s return to the Bay; it’s a lovely, hearty dish that requires lots and lots of stirring over a fragrant, steaming pot. These are truly my favorite kinds of recipes for the fall. 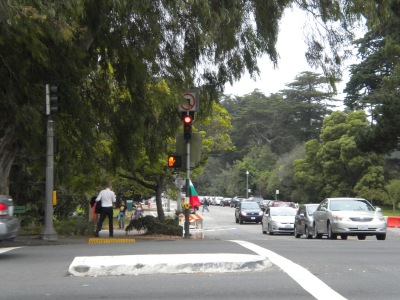 Fall first made an appearance last weekend when I accompanied a friend (a Bulgarian-a-holic) to the annual Bulgarian festival in Golden Gate Park. It was a dark, drizzly day, gusty and with that dampness in the air that makes 99% of us succumb to the common cold. But it was a festive day–full of dancing (I didn’t participate, although my companion did; somebody had to watch the bags!), baklava (yummy) and an impromptu trip to the beautiful Botanical Garden. 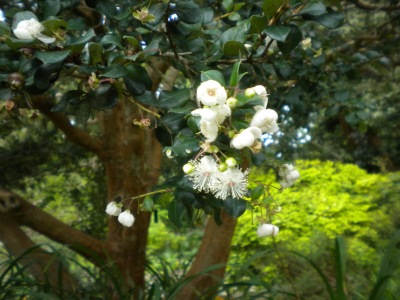 I snapped a lot of photos, but these two are the best of the bunch. The little white buds above were a favorite of mine and they had a lovely smell (we were in the “Garden of Fragrance”). The statue below made me feel like I was in Italy or France rambling in some country garden. The weather, however, was decidedly San Francisco.

Realize that, while the above may have seemed like a digression (how, after all, do we get from fall to the Bulgarian Festival/Botanical Gardens and then back to my kitchen?),  the outside world– namely, the capricious elements–always serves to inspire me when I return to the kitchen. Last weekend, as I walked through the Botanical Garden, I was craving something warm. I didn’t quite know if I wanted hot chocolate or a thick soup with barley and vegetables. Before I had time to take action (I stayed away from the kitchen on Sunday and, after seeing The Help, went for Southern food with a friend instead), the sun was again shining. And then, as if he himself had brought back the clouds, the Greek flew in on one of our coldest days yet, which sent me to my overly stocked and chaotic pantry (to my grandmother and mother, don’t be alarmed; there is a method to my madness). Pearl barley it would be and in the form of a pseudo-risotto that my imagination had cooked up thanks to 1) my love of risotto, 2) the tasty lentil recipe I posted months ago and 3) the leftover mascarpone cheese from the fig experimentation of a few weeks ago. It also didn’t hurt that a person in possession of a Meyer Lemon Tree had left a few lemons in the main office of the department with a sign saying “Take Me.” Obviously, I couldn’t resist.

The results of this experiment were even better than I expected. The lemon complements the toasted cumin seeds and together they combine to create something that’s both slightly spicy (more like “zesty”) and mildly tart. Also, while chewier than arborio rice, the pearl barley was a nice change from the standard risotto rice; it did take a little longer to cook (pearl barley may be one of the slowest grains out there; I’m pretty sure it took almost an hour for the liquid to be absorbed and for the barley to become tender), but it was worth it. My favorite addition was the mascarpone instead of butter; as I’ve mentioned before (via the sage advice of Jamie Oliver), butter is essential for the final stages, but, this time around, the vaguely sweet flavor of this soft Italian cheese beckoned to me. It seemed the perfect thing–almost like a pillowy, whipped cream cheese–to get this thicker, chewier risotto moving across the plate. And, even with the combination of peas, parsley (green things are key!) and a little Pecorino-Romano, it kept on moving…until there was no more.

-Heat the olive oil in a large, heavy saucepan over medium heat, then add the shallots and garlic.
-Salt and saute, stirring constantly, for about 4 minutes, or until the vegetables have softened.
-Add the pearl barley to the pot and stir until coated with the oil, then add the vermouth and simmer for 3 or 4 minutes, or until the barley has started to absorb the liquid.
-Adjust the heat to maintain a gentle simmer.
-In increments, add about 6 cups of vegetable stock (Since I had only 4 cups of stock, I evened things out with 1 1/2 cups water + the juice of a lemon), 1 cup at a time, letting the barley absorb most of the liquid between additions. This should take around 50 minutes (cooking barley is a time-consuming process, but one that’s worthwhile) altogether.
-Stir often so the grains on the bottom don’t burn and stick to the pot.
-You’ll know when the barley is cooked because, while it will be chewy (and chewier than Arborio rice), it also will be chewable.
-When the barley is tender (almost like an al dente pasta)  remove the pot from the heat.
-Stir in the toasted cumin seeds, lemon zest and lemon juice (from one lemon).
-Fold in the peas gently.
-Add the mascarpone and as it melts, stir in the cheese.
-Taste and adjust – add more salt if needed.
-Garnish with Italian parsley and a sprinkling of more Pecorino-Romano.
-Buon appetito!