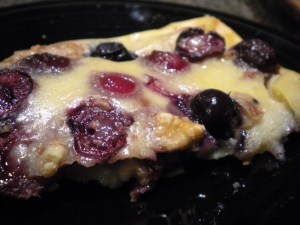 Nostalgia is an unhealthy trap that’s very seductive. The problem is, life is a very cruel, tragic and unsatisfying experience and you always think that another time in the past would have been ideal for you. For example, if I think back to bell-epoque Paris, it’s like Gigi, with beautiful costumes and great wine. The reality is there was no novocaine when you went to the dentist.

-Woody Allen (on Midnight in Paris)

Even though I’m a “the glass is half-full” kind of girl, I can’t help but love Woody Allen and his cynical, neurotic and overwhelmingly pessimistic outlook (this same love could explain how I ended up a Russian literature scholar). But he does have a point; nostalgia holds a false promise and we’re often so wrapped up in its illusory nature that we forget that there are perks to the here and now. For example, maybe I’ve been lamenting the end of summer, my free time, lazy and relaxed days at home, but the reality is that I’m 8 days away from a (full!) paycheck. I’m also feeling myself start to settle into the groove of being on campus, crossing things off the list, feeling excited about the texts that I’ll teach and how I’ll go about teaching them. And did I mention how much I love fall? 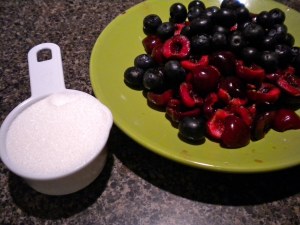 Ok, yes, I’ll slow down…There’s no need to rush things. After all, summer isn’t over yet, even if classes are starting. Proof number 1: It was positively sweltering today. But, as there was also an earthquake on the east coast (and we just had one, too!), perhaps this is just a sign that the end is near (according to the post-doc I now share an office with, a man has been standing near the campus gates with a poster advertising this very fate). Proof number 2: Life is still raining cherries, blueberries and other summer fruits, which is exactly how I came to call upon the culinary goddess, Ms. Julia Child, to direct me in the way of clafoutis.

Like a lot of recipes that appear on this blog, clafoutis had long been on my list of things to make. But only when the Greek sprained his ankle and I took a bunch of groceries to his place to cook did it finally seem the right time to make it. It’s rustic, French and basically a large custardy pancake with chunks of fresh fruit. In short, it’s an invalid’s dream food. And for the maker of the invalid’s fantasy, it’s really amazingly, beautifully simple. There’s little grunt work and it’s the kind of thing you can throw together in a pinch if you had initially been planning for a dessert-less night. And if your fruit is on the edge of going bad, why not throw it into a clafoutis?

Exactly. There’s no excuse. That’s how the blueberries ended up in mine. I also decided to fulfill the promise of clafoutis (according to food lore, “clafir” can mean either “to fill” or “to garnish”) by putting walnuts on top. Another perk is that the clafoutis can be dessert, it can be breakfast, it can be a snack you sneak into the library wrapped in saran (or is it surround?) wrap while you work on your dissertation. Perhaps I speak too soon, but who needs cake when there is clafoutis? Then again, a world without one or the other would just be yet another reason to feel nostalgia. No need for that; the grass is gloriously green on both sides of the fence.

Yields 6-8 pieces of fruit and custard at its bet

-Using a blender (or, if you’re in a household without one, relive the past by valiantly combining the ingredients with only a whisk and the brute force of your soon-to-be-sore arm), combine the milk, 1/3 cup sugar, eggs, vanilla, salt and flour, and blend.

-Lightly butter an 8-cup baking dish (or a 9×13 cake pan/casserole dish), and pour a 1/4-inch layer of the blended mixture over the bottom. Set remaining batter aside.

-Place dish into the oven for about 7-10 minutes, until a film of batter sets in the pan but the mixture is not baked through.

-Remove from oven (but don’t turn the oven off, yet).

-Distribute the pitted cherries, blueberries and walnuts over the set batter in the pan, then sprinkle with the remaining sugar.

-Pour the remaining batter over the cherries, blueberries, walnuts and sugar.

-Bake for 45 to 60 minutes, or until the clafoutis is puffed and brown and a knife inserted into the center comes out clean.

One thought on “Cherry (and Blueberry) Flavored Nostalgia”