“There is a fight going on inside me. It is a terrible fight and it is between 2 wolves. One wolf is evil –he is self-pity, envy, regret, resentment, anger, self-indulgence, ego. The other wolf is good — he is love, compassion, hope, kindness, peace, humility, generosity.” The old chief went on to say, “This same fight is going on inside you. And it is going on inside every other person as well.” The grandson seemed deep in thought for several minutes, and then he asked: “Grandfather, which wolf will win?” The old Cherokee chief replied: “The one you feed.”

-Native American Proverb (I first heard this at the yoga retreat)

Most days, I’d like to think that I exclusively feed the second (the good) wolf; I try to be optimistic, to do the best that I can, to be empathetic and generous–even with myself. But of course, there are many other days when I toss the first (the evil) wolf a big old chunk of meat and let it devour my offering. To feel a host of negative emotions is, after all, normal. It’s impossible to be happy, even content, all the time. Monday was a rough day for my inner- and constantly dueling-wolves. I was tired, I had a headache that wouldn’t seem to go away, my allergies were again–for the umpteenth time this year–making me sniffle; it wouldn’t have been hard to fall into that web of self-pity that is just waiting to ensnare us should we give it the chance. In short, the bad wolf was ready to attack. But fortunately, I didn’t have time for its trouble-making ways. There were things to do, from meeting with my writing group buddy to baking a cake for that night’s dinner with the Greek’s old roommates and their girlfriends. 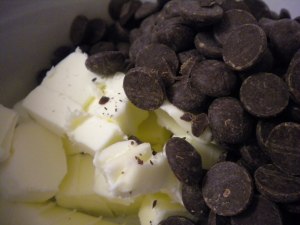 Even though my mood was less buoyant than it could have been, I was still excited about trying the cake. I had long been wanting to make it; it had been on my list of things to bake ever since last summer when, in my post-qualifying exam bliss, I read Molly Wizenberg’s A Homemade Life on the back porch of my mom’s house. I don’t know if it was the heat or the power of suggestion in the recipe’s title (she called it the “Winning Hearts and Minds” Cake since she had baked it numerous times for the man who would become her husband–as they say, the way to a man’s heart is through his stomach!), but I wanted this cake. Be honest, who in his or her right mind wouldn’t want fondant au chocolat (melting chocolate cake)?

In the midst of my baking, however, I ran into a small snag–one that sent the good wolf into hiding and brought the bad wolf out in full force. Imagine you’re painstakingly melting chocolate chunks and butter, 30 seconds at a time, while also stirring occasionally to make sure that things neither burn nor clump together. Once this arduous process is over, you add the sugar and stir, stir, stir until smooth and well-incorporated. You go to the refrigerator and pull out the eggs…only to discover that you have three, which is two short of the recipe’s requirement. Dinner is in 45 minutes and the cake takes 25 minutes to bake, as well as 15 to cool ; the nearest grocery store is 20 minutes away (yes, this could be a cautionary tale about the dangers of procrastination). Your boyfriend is on crutches (soccer injury) and, more importantly, you can’t leave the melted chocolate and butter sit out because it would no longer be in a melted condition by the time you would have returned. All you can think is D-I-S-A-S-T-E-R. But one good thing about the bad wolf is that it’s both rash and more than willing to throw caution to the wind. Bad wolves don’t follow recipes to the letter; if all you’ve got is three eggs, that’s all you can use. And maybe, just in case something should go truly awry, sprinkling a little cinnamon on top of the cake couldn’t hurt either. We can call that my (or the bad wolf’s?) last act of defiance; if this cake was going to flop, it was at least going to flop with flavor.

But amazingly, somehow three eggs were enough to bind the buttery chocolate-y mixture together! I would even say that the cake probably tasted better because of the egg shortage; it was gooey, yet crisp around the edges and on top. It really was like biting into a truffle that, after the initial resistance of the chocolate’s outer shell, fills your mouth with its melted and creamy center. Plus, despite the difficulties of the day and the near-baking disaster, dinner was lovely and provided a nice time to unwind; it was nice to see everybody (plus the Venezuelan/Italian parents of one of the roommates), to chat and to have a relaxing meal (pasta wheels with prosciutto and mozzarella!). It didn’t hurt that the cake was a success, either. Needless to say, each wolf left the party satisfied–and more than well fed. 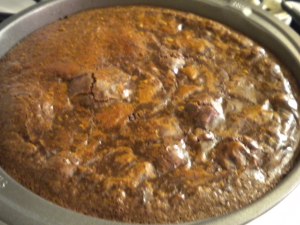 -Put the chocolate and butter in a medium microwavable bowl. Microwave on high for 30 seconds at a time, until just smooth.

-When the mixture is smooth, add the sugar, stirring well to incorporate.

-Set batter aside to cool for 5 minutes, then add the eggs 1 by 1, stirring well after each addition. -Add the flour and stir to mix well.

-Batter should be dark and silky.

-At this stage, lightly sprinkle on some cinnamon.

-Pour the batter into the prepared pan and bake for about 25 minutes, or until the top is lightly crackled, the edges puffed. The center of the cake should look set, jiggling only slightly, if at all.

-Cool in pan for 15 minutes (due to my need for speed, I cut this down to 10) and then flip onto another dish (Molly recommends that you flip the cake onto tin foil) . You want to serve the cake with the crackled side facing up, so be prepared to flip it back over.

2 thoughts on “Chocolate Cake and The Two Wolves”