When the spirits are low, when the day appears dark, when work becomes monotonous, when hope hardly seems worth having, just mount a bicycle and go out for a spin down the road, without thought on anything but the ride you are taking.
-Sir Arthur Conan Doyle

The way Sir Arthur describes it, bicycling may just be the ultimate salve for the soul. I should stress, however, that Sir Arthur and I, at least on this matter, will have to agree to disagree. While there are moments when I really like biking–the wind whipping in your face and hair, a lovely landscape before your eyes, getting to and from a place and all thanks to my own force–there are often moments when I hate it. Whipping wind can often lead to a bug landing in one of your nostrils, a lovely landscape is often discovered after a nearly insurmountable hill, and my own force is not always up to the task at hand. I could walk forever, but biking is different; it makes my limbs turn to jello. More importantly, sometimes when I see a huge hill and know that I’m supposed to get not only my body, but also a heavy bike up it, something withers in my soul (it may sound melodramatic, but it’s true) and I feel nothing but doom. I guess we could say that I’m not particularly sporty.

This is why last week when the Greek started talking about taking a bike ride to the San Pablo Reservoir in Orinda, I felt more than a little lukewarm. Mainly, this is because he’s a much better biker than I am and I didn’t want to be left in the dust. But there’s also the small fact that bike rides in a basically mountainous landscape just aren’t at the top of my list of “ways to have fun on a Sunday afternoon.” Movie? Yes, please! Reading a book? How many? Getting a cup of coffee from a nice shop or nosing around a bike store? With pleasure. I guess you could call it the ultimate city vs. country debate. I’m a little like Thoreau; I’ll take the country, but only if I’m sneaking back into civilization for a slice of cake every now and then. 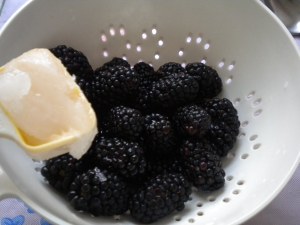 But I should also mention that I am willing–albeit a little unwillingly and suspiciously– to try new things. So, last Sunday I found myself preparing for a long bike ride. My first order of business was to make something hearty for breakfast. After all, I didn’t want to roll backwards down any hills! I recalled my favorite breakfast from last summer’s house-sitting stint, Blueberry Almond Polenta, and decided to revamp it. Ground pistachios, blackberries and honey seemed like the kind of meal that would lead to biking success, especially when topped with a dollop of creme fraiche (in my own way, I was channeling Le Tour de France). Not to mention that I was dying to try the Coconut Oil that I had picked up at Whole Foods. All I really wanted was for breakfast to have the taste of an island vacation and the French countryside rolled into one. Plus, the more calories the better; I needed to have something to burn.

Breakfast lived up to the fantasy and the flavors worked ridiculously well together. The bike ride, alas, was hardly the stuff of fantasies. Although Orinda was beautiful and it was warm and sunny, I found myself pretty close to miserable. The Greek, however, was happily biking along. To be fair, at times, the landscape cheered me up, but my legs, my poor legs, couldn’t compete with the hills, the other bikers that whizzed past me in their snazzy sporty suits and with the fact that what should have been two miles felt like 10 (and, to this day, I would swear was more than 2). It was at this point that I sullenly confessed that I couldn’t go on, that this wasn’t my idea of fun, that maybe male friends were the ideal companions for this kind of excursion. I swore there would be no more 15 mile plus bike rides in my future. To bolster my conviction, the memory lingered: I was sore the next day. 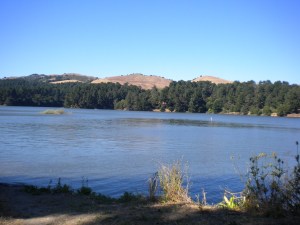 But one should never speak in terms of absolutes. You might be amazed to know that, after this “horror” story, I allowed myself to be talked into another bike ride this past Sunday. And, *gasp*, I actually really enjoyed myself. After a decadent breakfast of Boozy French Toast from Smitten Kitchen, we took the bikes to San Francisco and went from Embarcadero to the Mission…One of our stops, as requested by me, was Omnivore Books on Food, which is an adorable and well-stocked shop tucked away in the hills (N.B. I’m the kind of person who needs a little incentive. A cookbook store with food magazines from the 1930s and almost every cookbook you can imagine is a place I would happily bike to…even in the rain!). I happily bought two things: The Anatomy of Dessert, which is basically a book about the glories of fruit from 1929 (I found it not at all surprising that my friend Henry David Thoreau was mentioned in the first few pages) and Imbibe!: From Absinthe Cocktail to Whiskey Smash, which I opened to a page on Hot Apple Toddies and felt that “fate” was sending me a message. We then biked to Valencia, sat in a coffee shop and read: I was in the thick of “Middlesex” and the Greek had started “The Petty Demon.” We ended the day with Colombian food, stuffing ourselves with pupusas and plantains. No complaints were voiced and no misery felt.

Although I do love breakfast polenta, clearly that’s not enough. Delicious food may go a long way, but a little compromise goes even farther. 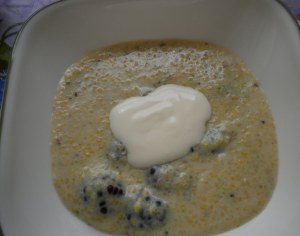 -Bring milk to a boil in a medium saucepan over high heat.
-Reduce heat to low and add cormeal, whisking constantly until smooth.
-Add ground pistachios and continue whisking until the cornmeal thickens to a creamy consistency.
-Add coconut oil and whisk through the cornmeal mixture.
-Turn off heat and whisk in honey, blueberries, vanilla and cardamom.
-Serve with a dollop of creme fraiche or Greek yogurt and extra blackberries and honey.

4 thoughts on “On Bicycles, Books and Blackberry Breakfast Polenta”