When in Rome, do as you done in Milledgeville.
-Flannery O’Connor

My oh my, in the past few weeks, I feel like I’ve run at least three marathons! It has well and truly been crazy-busy around here. So busy, in fact, that my poor old blog has been neglected…and around the time of our one year blogiversary! The good news, however, is that, while the Greek and I were driving around the Great American South, Dining with Dusty got the absolute bestest gift ever (needless to say, I was tickled pink)! Some other good news is that I’ve also got several exciting posts planned–some travel inspired, some home-cooking, old family recipe-inspired–because the simple truth is that you don’t drive 800 miles south and then all the way back without getting buckets of inspiration.

For me, the 800 miles south was also my chance to discover my inner-beer drinker. I don’t know what it was (the heat, the humidity, the fact that we were on the road and everything felt gritty?) but, to put it simply, more beer was consumed than I usually drink in a year. I should mention that this number is not at all impressive; it’s still pathetically small. It is, however, a start.

The first stop on our journey to the wedding in Memphis was beautiful Louisville, KY. I may be a bit biased, considering I love antiques, stone houses and anything and everything that looks like it belongs to another era, but, as soon as I saw Louisville, I was charmed. Everything was picturesque and the humidity was bearable; after many hours in the car, we took a long walk around old Louisville, where the lovely Central Park Bed and Breakfast is located. It was the perfect place to stop and, needless to say, it lived up to my expectations of what a B&B should be: gorgeously and thoughtfully decorated, comfortable, idyllic and with a pretty impressive and often sumptuous breakfast spread. I kid you not when I say that my mouth still waters when I think of those scones. This trip has convinced me that Kentucky is the kind of place I want to return to, for both the Bourbon Trail and the Southern hospitality. The people are just plain nice in the south and, more importantly, the accent is addictive. Being there, I just wanted to cut off all of my “gs” at the ends of words and not be so in control of my vowels. The Greek was also bitten by the accent bug and himself attempted a few “southernisms”…much to my great amusement. 😉 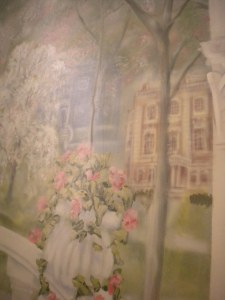 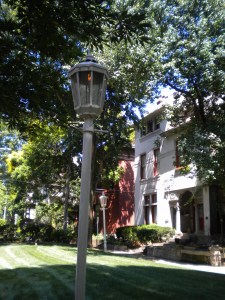 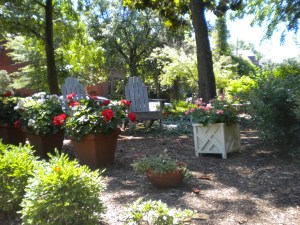 After Louisville came a brief stop in Nashville, at the Frothy Monkey, an incredibly cute and tasty cafe. It was a lifesaver because, at that point in the trip, we were slightly fading and caffeine was key. Thank goodness for Yelp, smartphones and my attraction to bizarre names. This was the epitome of a fortuitous road-trip discovery.

And then, one crazy Southern-heat induced storm later, we were in Memphis, where at the bottom of some receipts from restaurants, you find such expressions as “As Elvis always said, ‘Thank you, thank you very much!'” and the heat is so strong that it can create beads of sweat on your nose before 10:30 a.m. Memphis, to be sure, is a fun place; it’s sprawling and huge and, at night, lit-up carriages seemingly straight out of Cinderella carry tourists around the downtown area. There’s something truly kitschy, yet strangely appealing about it. It seems to be a city with a small and legendary downtown and that consists of little pockets of surrounding suburbia. 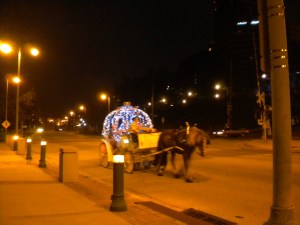 While I was busy with wedding stuff–there was a lovely bridal luncheon with a home-cooked meal of black-eyed peas and marinated chicken and dill gazpacho (the Slavic twist), a rehearsal dinner and then, of course, the actual wedding!–I did manage to make my way to the banks of the Mississippi River, a few very cool cafes suggested by the bride-to-be, Beale Street and, as a final Memphis treat, to Graceland!

As per usual, however, the real highlight was my Southern culinary adventure. I had myself a little Elvis-inspired treat at the Otherlands Coffee Bar and I’m proud to say that this sandwich of honey, banana and PB has finally turned the Greek into a peanut butter lover! 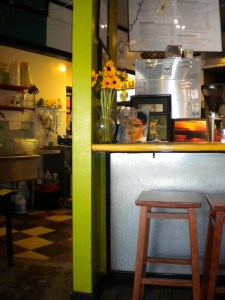 I also had some shrimp and grits and fried green tomatoes with jalapeño jam (adventures in jam-making are yet to come this summer)…and maybe, just maybe, the best crème brûlée of my life. A little turbinado sugar can go a long way around the edges of this dessert! It makes me long for a kitchen torch, which is right up there with the meat cleaver that I’ve long wanted. Yes, I do know and recognize that I’m a slightly eccentric child. I think this became apparent when, at age 13, I asked for (and received) a cappuccino maker for Christmas. 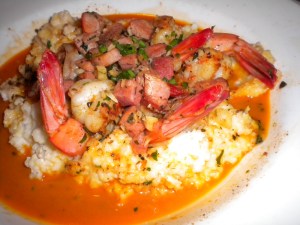 The wedding was lovely and yet another reason to eat both well and richly. It’s a good thing that, between my wedding-hopping and my return to the cutest and neediest miniature dachshund ever, I’ve been dancing and walking a lot. A girl’s gotta work off all the eggplant moussaka and wedding cake that was just too good to resist. 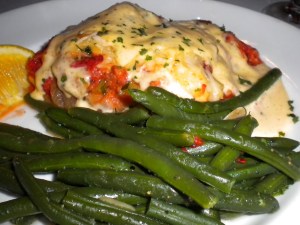 Interestingly enough, the night was young when the reception ended and, with a good friend from the department and her very sweet and cool boyfriend from Dayton (where we also later stopped; it’s a small world, especially in a car), we headed down to Beale Street to see the nightlife scene and maybe to continue our dancing…Due to the great license debacle of 2011 in which, thanks to the fact that I never changed my address with the DMV and was unaware that I needed to renew my license before it expired on my 28th birthday–oops–we were unable to get into a bar with live music, so we simply went elsewhere for food. Stumbling upon a hole-in-the-wall, we enjoyed some spicy rice and beans, rice and a tangy and spicy dish called Bourbon Street Chicken and I also had my very first experience with oysters. I was a bit wary of the oysters, but, as a food blogger, I felt it was my duty to try them. I can’t say they’re something that I would order again and again, but, even if somewhat slippery and slimy, I kind of liked them. Especially if I chewed them instead of swallowed them whole and also dipped them in cocktail sauce. Give it time…I might just come around. 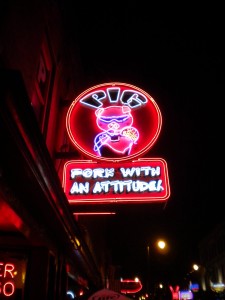 Our final stop, again with our Russian-speaking friends, was Graceland, home of the King. I was kind of thrilled to go even though I was also bemused by the Elvis mania, not to mention his decorating style….Oh, to be young and a “king” with a fortune, you too might fall prey to sparkly pillows and creepy-looking ceramic monkeys (what is it with Tennessee and monkeys??)….But one thing I was excited to learn about Elvis was that he always traveled with a chest of books. Another Elvis fun fact was that he loved Monty Python and Mel Brooks.

Exhausted from the heat, as well as the pace of our travels, before we again hit the road, I made one tiny request: Ice cream!! In downtown Memphis, all we could find was an Atlanta-based chain, MaggieMoo’s, but, let me just say, the Red Velvet Cake Ice Cream, which turned to red velvet liquid in about 3 minutes flat, was not only de-lic-ious, but was also the perfect way to say bye [bah]-bye [bah] to the South.