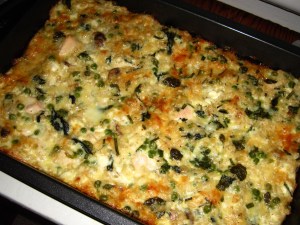 Academic writing can become a sordid drama. Professors feel oppressed by half-done manuscripts, complain about cruel rejections from journals, scramble breathlessly to submit grant proposals the day before the deadlines, fantasize about the halycon summer days of writing, and curse the foul start of the semester for stunting their productivity…We don’t need this kind of drama. All of these practices are bad. Academic writing should be more routine, boring and mundane than it is.
-Paul J. Silvia (How to Write a Lot)

The epigraph to this post should tell you everything you need to know. It should, at the very least, drive home what I’ve been saying in lots and lots of different ways for the past few months: writing is hard. It’s not hard because it’s _actually_ hard (for example, as I type these words, they’re flowing with ease), but because, to shape something, to think it through and to have it achieve its goal of conveying a particular message…well, that requires serious discipline. Not to mention serious work, dedication and structure. 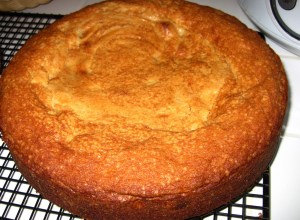 Only now, at this late stage in my teaching-free semester did I realize that I needed help. Yes, help. That little four letter word that I often hate to ask for because I’d prefer to be all-knowing and powerful and do everything myself. As with most difficulties I face, I turn to the written word first, certain that some expert has surely written a book on the way that I can tackle my goal. And that’s how I stumbled upon this gem. Seriously, it’s a golden guide on how to write. The ultimate message is a no-frills, no-coddling approach to the task. It’s truly as simple as either learn to live with this occupational challenge and train yourself not to perceive it as an arduous task, but rather as a daily habit. In other words, writing and I are supposed to, with time, develop the same kind of addictive and loving relationship I have with coffee. And, you know what, I think I can live with that. 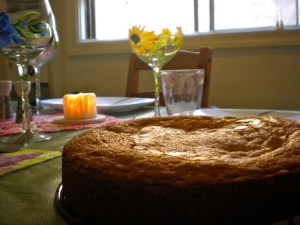 What it ultimately means is that, just like when I decide to go about the time-consuming, but oh so worth it process of baking a delicious cake (perhaps the very almond cake that I recently saw on Orangette and just had to have because it sounded like Marzipan Cake, a fantasy concoction of mine long in the works…like most great ideas, it had naturally already been done), I’ve just got to put the time in. This is all despite the fact that, from sifting to cooling time, this will often be a 2-3 hour process. Maybe even longer depending on the recipe. The point is that, once the grunt work is done, I get to reap the rewards for however long the cake lasts! And, honestly (if we’re to carry the cake metaphor all the way to the bitter end), 2-3 hours of honest labor a day–of precious writing/thinking time–is just as good as a cake. Both will make me feel good; one might even make me feel better than the other…in the long run.

Or at least that’s what I have to train myself to believe. Nobody said reform was an easy process. Which is why the author of this book, a psychologist, says that you must reward yourself. As that’s something I’ve never had trouble with, as soon as I finished the Chekhov section of the chapter and found myself in possession of an Amazon gift card (yes, the world does work in mysteriously fortuitous ways sometimes), I ordered myself Heidi Swanson’s (of 101 Cookbooks) new cookbook, Super Natural Every Day. In a nutshell, I love it! It’s such a pretty book and full of healthy, simple and delicious recipes. 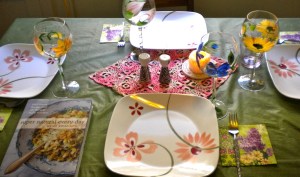 As part of the process is to learn to separate work time and free time–and not to work on the weekend!!!! That alone is the sign of having achieved the ultimate discipline…and I’m not there yet. At least in my thoughts. Perhaps in practice I am, although my self-expectations would say otherwise–I made a pretty elaborate meal when I had my friends over for dinner a few weekends ago: almond cake and a brown rice casserole with mushrooms, peas, chicken and lots and lots of Gruyere cheese. The rice casserole was creamy, practically vibrating with good health and was enough food to feed an army. Or, in my case, enough to carry me through a pleasant Saturday evening and well into a week of producing paragraphs. 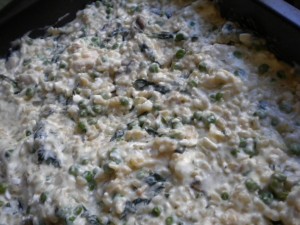 If you read 101 Cookbooks, you’ll know that Heidi is a vegetarian and wouldn’t have included a recipe calling for chicken in her latest cookbook. I, however, was improvising because one of the friends who was coming over isn’t overly fond of mushrooms and the casserole was based on the simple combination of mushrooms, cheese, spices and rice. I decided chicken would add to the heartiness of the meal (when feeding men, I usually opt for protein-heavy dishes) and that, in the spring and summer and, well, any season, you just can’t go wrong with peas. I think I made the right decision. And then another good one when I also opted to add in more cheese than was probably necessary; as they say, a little dairy goes a long way.

-Preheat oven to 350F degrees. Rub a medium-large baking dish with a bit of olive oil or butter and set aside.
-In a large skillet over medium-high heat saute the chicken until it is cooked on the outside but still pink on the inside (about 5 minutes). Place in a bowl off to the side.
-In the same skillet, saute the mushrooms in a glug of olive oil sprinkled with a couple pinches of salt and pepper. Stir every minute or so until the mushrooms have released their liquid and have browned a bit.
-Add the onions and cook for another 4 or 5 minutes or until they are translucent.
-Stir in the garlic, spinach and peas and cook for another 2-3 minutes and then remove from heat.
-Add the chicken to the vegetable mix.
-Then, add the rice to the skillet and stir until combined.
-In a medium bowl whisk together the eggs, cottage cheese, sour cream, Dijon mustard, salt (about 1/2 tsp. kosher salt) and pepper.
-Combine the rice mixture and cottage cheese mixture in a large bowl, stir until well combined and then turn out into your prepared baking dish.
-Sprinkle with the Gruyere cheese, some of the chives and tarragon, setting aside a little of each for serving.
-Cover with foil and place in oven for 30 minutes.
-At this stage, remove foil and bake for another 20 or 30 minutes more or until hot throughout and golden along the edges. —Sprinkle with the remaining cheese and spices and then sit down to enjoy.

2 thoughts on “On Reform and Rice Casserole”