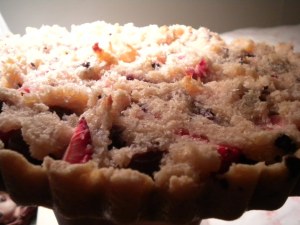 The aim of life is appreciation; there is no sense in not appreciating things.
-Gilbert K. Chesterton

Today I biked the 4 miles uphill to campus, taught an intermediate Russian class for a friend who was taking her Ph.D. exams and then went to a dissertation workshop. Afterwards, inspired by my new “let’s get this thing done” plan, as well as the fact that it was a fairly crowded workshop and I got to see just how many other graduate students have no clue how to go about this process of seemingly endless writing, I went to the library, got out three heavy Russian art history books and then promptly discovered that they were useless. Such is basically an average day in the life of me and, as they say, what doesn’t kill us makes us stronger.

That tart you see above? Well, this past summer when I was house-sitting, I had a good friend up to the castle for dinner. We made both this Cherry Macaroon Tart from 101 Cookbooks (which, according to Deb at Smitten Kitchen, was revamped for the cookbook) and a fantastic, eternally pleasing pasta recipe from the Zuni Cafe Cookbook. The memory was recalled fondly and more than once, so, a few weekends ago, we reconvened at my place to relive the culinary delights of the evening, but this time in the right chronotope. It was a great evening–the pasta turned out better than it had the first time, which was largely due to the addition of the lemon pickles I made back in February. Those pickles are outlandishly good and could spruce up the blandest dinner ever. The tart delivered as well, but I will say that it made me more wary of frozen fruit than ever before. While we used fresh blueberries and strawberries, the cherries were frozen and the crust just didn’t keep as well due to the extra moisture. I will, however, add that chopped chocolate is a welcome addition to the coconut and fruity flavor.

Also, my ridiculous allergies be damned, I’ve been into long, rambling walks lately. Can you blame me with scenery like this?

A long time ago I kept a paper journal, in which I chronicled my daily life in Japan, but then, right around the time I got into grad school, I stopped. But about three weeks ago, I rediscovered the habit and the pleasure of having a non-public place to write down and organize my thoughts. Soon I’ll have filled up all the pages in the journal that I started back in 2005 and I’ve already decided that the next journal I buy will be from this lovely Etsy store; I think I like the one with feathers best.

I love lasagna. Especially what I like to call Lazy Lady Lasagna: no-boil noodles, a jar of decent tomato sauce, a few cloves of pressed garlic, mozzarella and parmesan cheese and several handfuls of spinach. 40 minutes later, voila, dinner! Yes, short cuts are a grad student’s number 1 method of survival.

There’s also yoga, which, even if you’re in pain when it’s all over, is really a wonderful way to end the day. And this past Monday, after several downward facing dogs and painfully trying to mold my body into the shape of a tortoise (doesn’t that just look like it would hurt?), the Greek, whom I had finally convinced to go to yoga (naturally, it was a particularly intense class), and I made the Spring Pasta recipe that was recently posted over at 101 Cookbooks. After yoga, healthy food was key and the egg, avocado and broccoli combination was helped by pickled lemons, leeks, fresh mint, parsley and cilantro. No matter which vegetable/spice route you go, it’s a must try recipe that makes for a simple weeknight meal.

While I, for the most part, have stopped reading for pleasure until the chapter is written, I recently found two authors who I think are worth recommending. The first is the Greek author Margarita Karapanou, about whom I found out from a friend (she used to blog here) who works in the publishing world and even knows the translator (the message I sent my friend expressing my pleasure has since been forwarded and responded to!). I read Rien ne va plus in two days and liked it so much that I’ll be teaching it in the fall. It was brilliant, surreal and slightly weird; in short, right up my alley. The other author is Karen Russell, who writes whimsical, yet bizarre stories about the South; she’s like Flannery O’Connor, but without Catholicism. Also, how can you not love the title of her book: St. Lucy’s Home for Girls Raised by Wolves? I sometimes read one story with dinner, which can sometimes be salads with artichokes and parmesan and a lemon garlic vinaigrette. And don’t forget the pine nuts!

5 thoughts on “An Act of Appreciation”