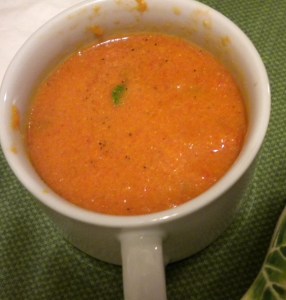 Failing to fetch me at first keep encouraged.
Missing me at one place search another,
I stop some where waiting for you.
-Walt Whitman (Song of Myself)

It’s funny to think I made this soup almost two weeks ago, but I’ve just felt so weird about posting it, considering the weather here on the west coast has been going well into the 60s, sometimes even into the 70s (!) for the last several weeks. And, trust me, that’s not a complaint (or a west coaster’s almost chronic bragging about the weather); it’s more that I just find it hard to talk about the soothing quality of a piping hot bowl of a rich Creamy Tomato Soup when I then find myself going outside in a tank-top (don’t believe me? Look below!)! 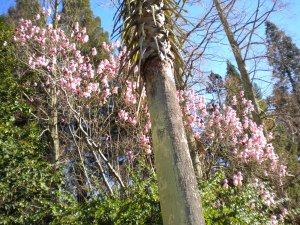 But what’s a girl to do? Global warming is here to stay, so clearly such cooking calamities will continue to occur–and well beyond the confines of California. Keep in mind that it’s also possible that Creamy Tomato soup transcends seasons and warm temperatures. After all, it goes so darn well with grilled cheese it’s almost too much of a temptation. 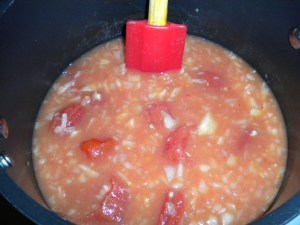 And when you’re in the midst of researching, filling out funding forms for next year, attempting to create an outline for Chapter 1 of the old dissertation and thinking about Big and Important Ideas, you have no strength to fight temptation, which means that you pile the cheddar cheese onto the Ciabatta bread, put it in the oven and hopefully don’t char it like I did. Oops. 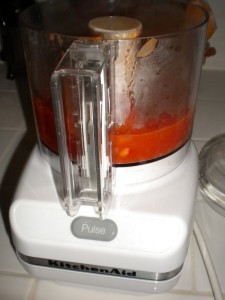 That possibility is enough for me to say that you shouldn’t even think of putting the bread into the oven (especially under the broiler!) without the safeguard of knowing that one portion of your meal will turn out, be the color it’s supposed to be and, to boot, taste just right.

Plus, let’s not kid ourselves; half the fun in making this soup is pulling out the food processor and watching the whole tomatoes, in addition to all the garlic and onions you so painstakingly chopped and almost wept over, go from complete solids to a completely creamy liquid. One that is just begging for the addition of some cream and a sprinkling of Italian Parsley. 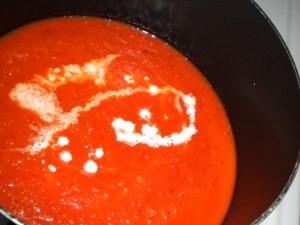 -Melt butter in a medium stockpot over medium heat.
-Cook onion and garlic, stirring constantly, until soft and translucent, about 3 minutes.
-Add tomatoes, their juices, and stock.
– Season with salt and pepper and bring to a boil, then reduce heat and simmer 10 minutes.
-Working in batches, transfer tomato mixture to a blender or food processor.
-Puree tomato mixture (cover the lid with a kitchen towel while machine is running).
-Return soup to a clean pot and set over low heat.
-Whisk in half and half.
-Season with salt and pepper to your taste.
-Sprinkle parsley over the soup.
-Serve immediately and enjoy!