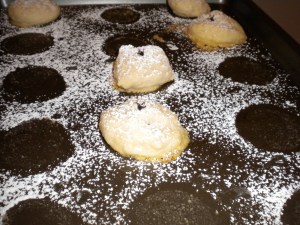 So, I’m currently kind of obsessed with at least 5 things. A girl’s got to have hobbies, after all.

1) My bike. I love riding it, going places on it and finding pretty, scenic streets to ride on. I keep asking myself, “why didn’t you do this sooner?!”

2) Cleopatra: Ever since I read that article about the latest wave of Cleopatra studies and biographies, my lifelong dream of going to Egypt to see the pyramids has again risen to the surface of my consciousness.

3) Going to the Bancroft Library to read old, overpriced and pleasantly smelling journals, so as to try to figure out how to construct the first chapter of my dissertation. Let me just say, those pages are huge, the Cyrillic font pre-revolutionary and, because I don’t want to miss anything that could be important, my goal is to comb through them carefully. Needless to say, it’s a time consuming and laborious job! But one that’s also fun.

4) Cooking, but we all already knew that, didn’t we? 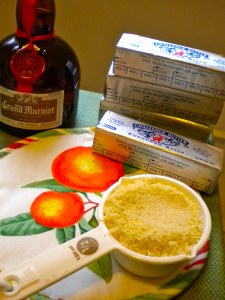 5) Perhaps this seamlessly blends in with number 4, but, more specifically, cooking from my new cookbooks, of which I’m ashamed to say there are 4. Actually, if you count the one my grandma just mailed to me, which isn’t old per se, but is simply new to my kitchen, 5. It’s almost shameful, really. But then when you consider that I do use them and, even though January is only half over, I’ve already made recipes from all but 2 of them, it is rather amazing.

Just call me prolific. Or a procrastinator. It’s all a matter of perspective.

Plus, when a girl’s invited to a “Winter break is basically over, so let’s celebrate the advent of the spring semester” party, she can’t go empty-handed (bad manners are a serious no no). And cookies happen to travel well. Very well, in fact. 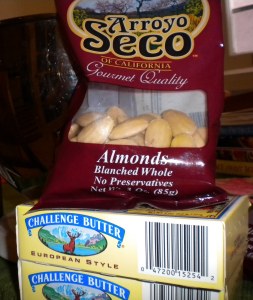 And so, armed with the Gourmet Cookie Book, I looked for something relatively easy looking, as well as not overly sweet (to appeal to the taste buds of our fine hostess). What my eye landed on was Gourmet‘s Cookie of the Month in April 1974: Kourambiedes, aka Greek Butter Cookies.

One trip to the grocery store later and in possession of Grand Marnier, two pounds (yes, two!) of butter and blanched almonds, I began the recipe….only to discover that what ultimately sounded easy on paper was difficult in practice. Despite the fact that I was recently gifted with a pomegranate candle holder, which is a symbol of good luck, luck didn’t actually seem to be on my side. Funny how that works…. 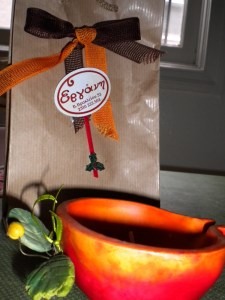 I ran out of flour and substituted a cup and half of Better for Bread flour for good old regular white. A few of cookies fell apart (maybe even due to the flour substitution) when I attempted to dredge them in powdered sugar almost immediately post-baking. Note to potential bakers: either roll them in powdered sugar before they go in the oven or sprinkle it on. Unless, of course, your flour/butter/almond mixture ends up sturdier than mine. It was also suggested to me by a native of Greece that clarified butter might have helped the flavor. Clearly, some recipes were not made to be followed, which is a lesson well learned. 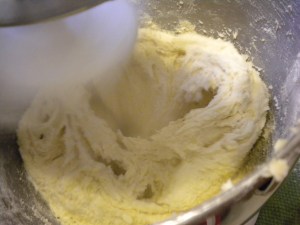 Were they worth it? I think so. They’re crumbly, melt in your mouth and have a soft spicy flavor– clearly Greece’s version of Mexican Wedding Cookies, Russian Tea Cakes and any other country’s little cookies covered in powdered sugar. And they go superbly well with a cup of tea…almost like a buttermilk scone. That’s enough of a reason to bake them right there.

Adapted ever so slightly (in practice, at least) from the Gourmet Cookie Book
Yields about 4 dozen 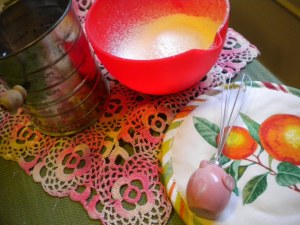 -Cream butter at low speed for 1 hour (**as that’s kind of ludicrous, it’s best to use a standing mixer, which, according to the recipe’s directions, as well as my experience, takes only 8-10 minutes) until it is almost white.

-Then, blend in 4 ½ cups flour and ½ cup finely ground blanched almonds, ½ cup at a time, to form a soft dough.

-If the dough seems sticky, chill it, wrapped in wax paper, for 1 hour.

-Form the un-sticky dough into 1 ½ inch balls and stud each ball with 1 clove.

-Put the balls on baking sheets and bake them for 15 minutes, or until they are pale golden.

-Transfer the cookies to a rack, let them cool for 2 minutes and dredge them in sifted confectioner’s sugar. **My note: Or, depending on the consistency of your cookie, sprinkle it generously with the waiting sugar. Or, so as make sure that the sugar is distributed evenly, roll them in sugar before baking. 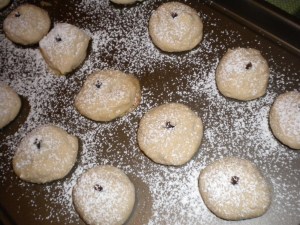 3 thoughts on “Butter Me Happy”