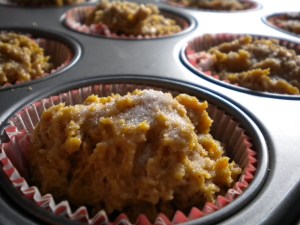 “But when we sit together close, we melt into each other with phrases. We are edged with mist. We make an unsubstantial territory.”
-Virginia Woolf (The Waves)

My life is generally all about words these days–finalizing the conference paper, grading assignments and responding to this batch of revised papers. But even though I’m still racing to get everything done (it’s amazing how you can cross off everything on your list and then, before you know it, there’s a new pile of things to do; such is the nature of the beast known as life I suppose) and my eyes are tired from endless hours in front of the computer screen, I didn’t want to leave for Los Angeles without posting. Especially since it seems like I’ve been spending a fair amount of time in the kitchen…Or maybe it just feels that way since cooking means dirtying dishes and dirty dishes pile up quickly and life without a dishwasher is hard. Magical powers would be appreciated, even if only of the most prosaic kind. However, I digress (surprise, surprise).

Another reason I wanted to blog is that I have a little confession to make–one that I find to be fairly embarrassing. I never thought I would say this, but I decided to subscribe to GOOP. And the thing is that I kind of like it. And, by it, yes, I do mean GOOP itself. As in Gwyneth Paltrow’s newsletter, which can, on the one hand, be a bit pretentious and occasionally annoying, but, on the other, can be quite informative and full of interesting recipes, suggestions, etc. When I recently read the newsletter about overcoming sugar addiction , I was a little put off by the tone and in denial. But, after thinking about things more carefully, I decided that I could start making minor modifications to recipes that would allow for a healthier lifestyle. And much to my surprise, I would say that substituting whole wheat flour for your all-purpose white has led not only to an unexpected (and not at all bad) flavor, but also to an improvement in texture. Take, for example, these pumpkin muffins I made (I was inspired by a friend’s use of Epicurious.com and went searching for a recipe for a Saturday afternoon Dollhouse viewing session with a friend; just fyi, fresh apple cider pairs wonderfully with pumpkin muffins). Flour modifications (1 cup whole wheat, 1 cup all-purpose) made for a heartier muffin and I also decided to stuff them with cream cheese and sprinkle sugar on top. Who said whole wheat flour had to lead to something tasteless? I feel that that’s the problem with these healthier options–people automatically associate them with all that’s bland. 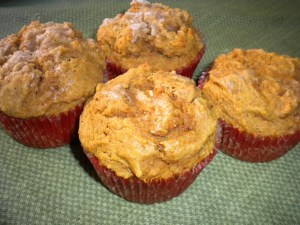 Not only GOOP, but also my email from Daily Candy led me to the bread from the Tartine Bakery in the Mission District in San Francisco. Both newsletters had featured articles on the bakery and select recipes from the new cookbook, Tartine Bread, which, between me and you, I would not at all mind owning. Who wouldn’t want recipes for Savory Bread Pudding, detailed pictures of the bread-making process and also the secret to Baked French Toast? In my mind, it’s right up there with an ice cream maker as an ideal gift. But I’ve always been a little strange, I suppose. 🙂 I was so intrigued by all of this press coverage that, after my usual tutoring session on Wednesday afternoons, I decided to have a little adventure in the Mission and to go and pick up some bread. The funny thing about buying bread at this bakery is that it’s so in demand that, as soon as it goes on sale (exactly at 5 p.m. Wednesday-Sunday) you literally have to wait in a bread line (separate from the usual bakery line). But, if you’re really hardcore about getting your bread and not leaving things to chance, you can even call up to 3 p.m. the day of to reserve a loaf or half loaf. Fortunately for me, despite not having taken the necessary steps to guaranteeing that I’d be coming home with bread, I was able to buy a half loaf of the Country and a half loaf of the Walnut. Bread, cheese and prosciutto make for a nice and simple dinner (using only a few dishes doesn’t hurt either). 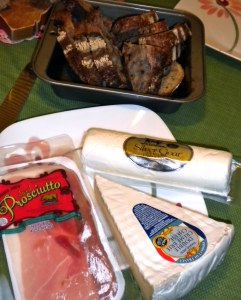 Clearly, when you’ve got leftover bread, you have several options, but French Toast is by far the best one. I made this recipe from Orangette this past summer and really liked it, so I decided to try it again, but to slightly doctor it. For my purposes, the addition of cinnamon and a teaspoon of almond extract seemed only right. Especially since I sauteed some apples in butter, covered them in cinnamon and toasted almonds to go on top. What can I say? It was a holiday and I believe in honoring the memory of those who have fallen for my country with an elaborate “I love the fact that I have this day off” breakfast. I truly mean that in the most respectful way possible. 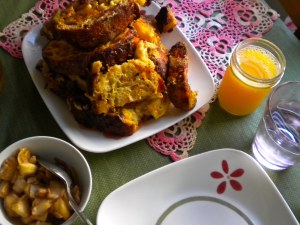 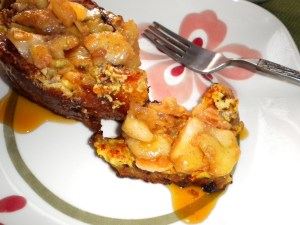 The final culinary highlight of the week was a friend’s birthday party on Friday evening (she shares the same birthday as my grandpap, so it was a truly celebratory day!)! As she was going all out and making crazy things like paella and Boeuf Bourguignon, the least I could do was bake some cookies. 🙂 As she, like a few of my other California friends, don’t really care for overly sweet things, I decided to revisit the salty/sweet cookie recipe I made when my friend from NY was visiting back in September. This recipe is courtesy of Joy the Baker and is basically perfect. But, as per my new rule of experimenting with whole wheat flour, I decided to partially abandon the recipe (can you see how my neuroses are fading away? This, people, is progress!) and combine 1 cup + 1 Tbsp. bread flour with 1 cup + 1 Tbsp. of the whole wheat variety. Honestly, they were chewier and less crumbly, which is exactly what a cookie should be. 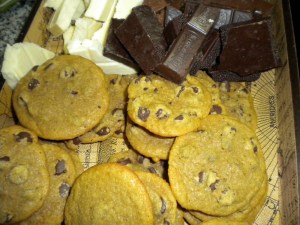