To sing this small but remarkable thing, one had absolutely–yes, absolutely–to have a full, genuine inspiration, a genuine passion or its full poetic assimilation. Otherwise the romance would not only fail altogether, but might even appear outrageous and all but something shameless: it would be impossible to show such intensity of passionate feeling without provoking disgust, yet truth and simple-heartedness saved everything.
-Fyodor Dostoevsky (The Eternal Husband)

Shock of the century: on Wednesday, I baked a cake. 🙂 Not just any cake, mind you, but a special cake, one that is oh so perfect and seasonal that it encapsulates fall in every bite. In short, it’s a Pumpkin Spice Cake!!

What brought on this bout of midweek baking? Well, sometimes you’re just having a crummy week, few things seem to be going well (that is, pedagogically) and you simply have no choice but to decide to call a time out and step back from the madness. It truly does happen to the best of us. Plus, I’m more than certain that, as a Myers-Brigss INFJ personality type, I often need to take a breather from the world in order to regroup. I’ll also confess that, when you have a stack of papers waiting for you, it does help to know that you have some kind of sweet (I’m certain that I inherited my sweet-tooth from my grandpap) to see you through all the misplaced modifiers, logical fallacies and poorly integrated textual quotes. On the other side of that equation and to be completely fair to my students, it is similarly pleasant to discover a solid essay with good textual analysis while taking a bite of a moist and light cake. Really, cake + grading = Win/Win. 🙂

One trip to Whole Foods later and the cake was underway…not to mention Operation Cheer-Up. 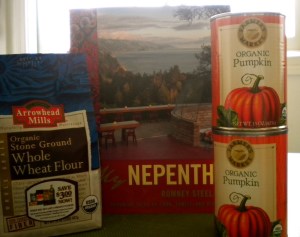 I’m pleased to report that it was a complete and utter success! Baking can be an excellent distraction, as well as a way of producing something and seeing instant results (and is our current age not one completely focused on the concept of “Instant Gratification?”). Fortunately, the cake finished baking right as I was about to head off to tutoring in the city, which is always a fun and gratifying experience. Especially when you take into account that you get to read completely random things like “The Hand of Death” (a Mexican ghost story) and inject all the campy horror that it deserves into your voice. Children appreciate these things; college students, sadly, do not. Oh well, I guess this is proof 1,000,002 that I’ve got a bit of a Peter Pan complex :), but I think it’s always a good idea to preserve one’s childish enthusiasm.

I should also confess that my motives behind the cake were not entirely selfish. As I had dinner plans with the Greek (by the way, I persist in calling him the Greek on this blog simply because the Golden Rule is that names and faces are not to be revealed) and said plans consisted of him making the main course–Greek-style fish (recipe to be revealed in the following post, although, as he, unlike me, measures nothing, 🙂 it will be pure guesswork on my part) — and of me making both dessert and one of my signature salads (also to be revealed at some later date), it served a higher, more communal purpose. More importantly, since his parents were arriving on Thursday, it only made sense to send them some leftover cake as a “welcome.” Yes, here’s a glimpse into my logic….as well as the secret of how I bake often and yet seem to gain no extra pounds! Just kidding.

But, seriously, to eat a whole cake by oneself would be the height of gluttony, would it not? Even if it looks like this and tastes 100 times better than it looks? The real point is that, as cliched as it might be, small gestures and small slices can both go a long, long way. 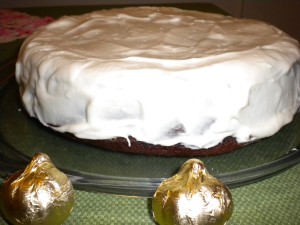 Adapted from Romney Steele’s My Nepenthe: Bohemian Tales of Food, Family and Big Sur
Yields 10-12 slices, or even less depending on your willpower

-Preheat the oven to 350.
-Lightly butter and flour a 9-inch round cake pan, shaking out any excess flour.
-Combine the whole-wheat flour, white flour, baking soda, cinnamon, cloves, nutmeg and salt in a medium-sized bowl.
-In a large bowl, stir together the oil and brown sugar, mixing well.
-Beat in the eggs (by hand), one at a time.
-Stir in the vanilla.
-Add first the pumpkin puree and then the molasses, stirring each ingredient in.
-Mix in the dry ingredients, mixing until thoroughly incorporated.
-Last but not least, stir in the raisins and walnuts.
-Pour the batter into the prepared pan. Bake about 1 hour, until a toothpick or cake-tester comes out clean.
-Cool on a rack for 15 minutes and then invert and cool the cake completely.

for the frosting
1/2 cup (4 ounces) cream cheese, at room temperature
1/2 cup sour cream
1 tsp. pure vanilla extract
1-2 cups of powdered sugar (depending on how sweet you like your frosting)

-Mix the cream cheese, sour cream and vanilla in a medium bowl until smooth.
-Sift the powdered sugar and mix it into the wet ingredients.
NB: It should be thinner than a typical cream cheese frosting.

-Place the cooled cake on a cake plate. Spread a thin layer of frosting on top and all over the side. You may end up with some leftover frosting, but set it aside–or freeze it–for a rainy day or for the banana bread that you’ve had stored in your freezer since June…. 🙂

2 thoughts on “The Magic of Pumpkins”