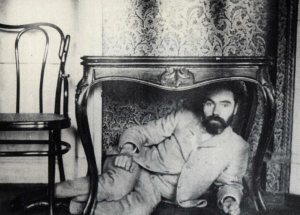 It’s all so familiar and clear,
My eye’s accustomed to every turn;
I’m not mistaken- I’m at home;
The wallpaper flowers, the chains of books…

-Valery Briusov (“At Home”; in the photograph to the left, that is indeed Briusov, posing underneath his desk…In case you’re wondering why, it’s best not to ask questions; I mentioned several posts ago that these people were weird and you’re just going to have to take my word–and the provided image–as proof)

I should mention that this is a bit of an “anniversary” post; “Dining with Dusty” now has 20 posts to its name! 🙂 While 20 posts, of course, aren’t all that many in the grand scheme of things, the truth is that, as much as I wanted to start this blog after my PhD exams were over, it took me a long time to actually begin writing it (as they say, “Starting is often the hardest part.”)…After all, I did wonder how I was going to fit such a thing into a lifestyle that already involves too much of the written word, as well as the ever important question: What in the world am I going to write about, besides the oh so obvious topic of food? This is still a question that sometimes plagues me when I start composing these entries, yet, miraculously, the words seem to flow (and perhaps even too freely sometimes). The beautiful thing about this whole process is that it gives me hope for other looming projects involving lots and lots of writing, even if of a clearly different variety. 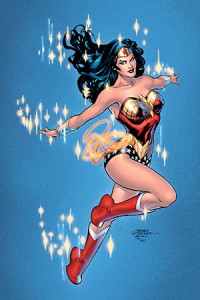 And as I’m again drafting the prospectus, reading Symbolist literature, grading papers, both teaching and torturing my students with beloved Sologub, preparing for next week and the two deadlines I have on the horizon and still able to cook and blog, things seem to be falling into place…and even with a few surprises that seem like cherries on top (and fresh ones too; none of that jarred nonsense). In any case, I don’t think it’s at all coincidental that my undergraduate thesis advisor gave me a Wonder Woman journal for my graduation gift (but perhaps I sing my own praises too highly). =P

But enough of my hijinks and lyrical digressions. As happy as I am to write about Briusov and co., this is a blog about food. Fortunately, since I recently had a lovely friend visiting from the east coast, I was out and about, basically eating my way through the bay. The great thing about having friends visit is that it not only helps to motivate me to explore the area and its many offerings, but lets me show off and revisit some of favorite places as well. I then get to see how accustomed I’ve grown to California and how it really has become one of my many “homes.” Plus, it’s a remarkable way of seeing how many delicious meals can be squeezed into 4 days (calorie counting not allowed…or recommended) and even on a grad student’s pathetic budget; here are some of the highlights: 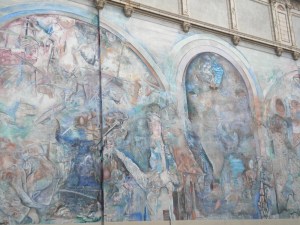 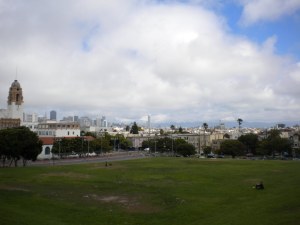 1) Dolores Park and the fine offerings of the Mission, from ice cream at Bi-Rite (what do you say to some Brown Sugar with Ginger Caramel Swirl?) to sandwiches at Tartine. Can you guess which order we ate them in…? 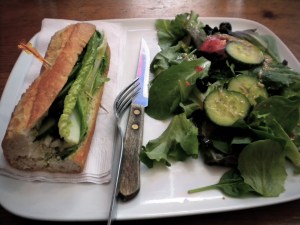 2) After an afternoon of walking around the city and seeing Avatar in 3D (yes, somehow I managed to miss this pop-cultural moment back in January, but, thanks to Hollywood’s need to milk any cow to its very lost drop, I still got the big screen experience; it really was stunning…Sadly, however, the writing was not. I was also dismayed to be faced with almost three hours of Sigourney Weaver, who, for some reason or another, I took an instant dislike to back in the day), 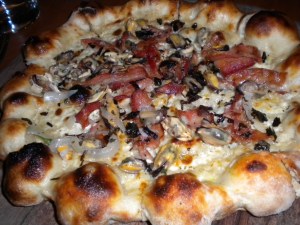 we headed back to the east bay for dinner at Gather, a restaurant that opened near campus in the past year and has long been tempting me. And it didn’t 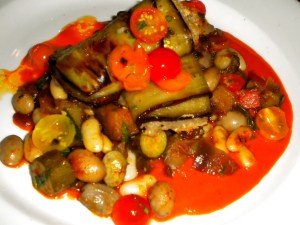 disappoint; the cocktails and food were tasty and the service was friendly, but still I must say that, considering the portion size of each meal, it was a bit pricey. Despite my typical meat-eating ways, I went with the vegan eggplant dish and stole a slice of one of my companion’s calamari pizza.

3) I’ve been to Pizzaiolo for dinner and drinks, but never for breakfast; clearly, this was a mistake since both the Walnut Turnover and half-buttermilk doughnut I had melted in my mouth (and gave me a sugar rush for the rest of the day). Plus, these people know how to make a cup of coffee; I was, not at all surprisingly, in love. 🙂 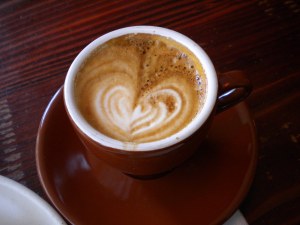 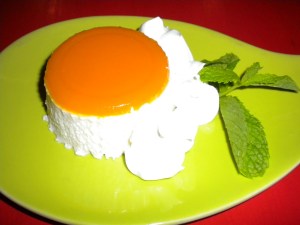 One might even say that the rest of the visit passed in a happy, sugary blur. We went for tasty Vietnamese food at a restaurant on Piedmont, Xyclo, where we also split mango panna cotta. Then, fully sated, we returned to my apartment to watch Hot Tub Time Machine, which, 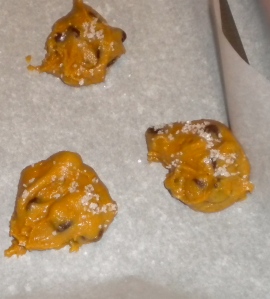 being about the ’80s, was A-ok in my book….The following night we had a Pride and Prejudice fest with two friends from the Slavic department; such an event would not be complete without cookies, so, naturally, we baked. And, yes, that is sea salt you see on those cookies; sugar and salt were meant to be combined!

5) Before our “last supper,” we went to MOMA. Sticking to the precedent we had established on our first day together, we had our dessert first, soaking up the last of the day’s rays on the rooftop garden and splitting a slice of cake. Cappuccinos were also necessary. 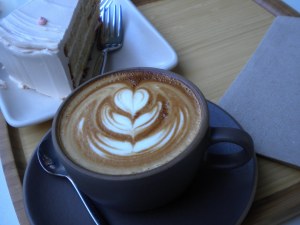 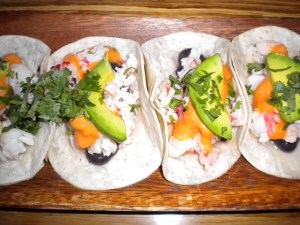 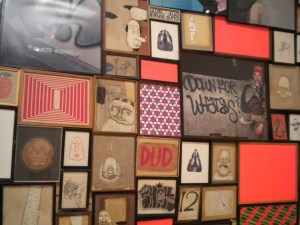 You should never think there wouldn’t have been room for something savory; after thoroughly exploring several exhibitions at MOMA, we headed to Maya for tacos and guacamole galore. 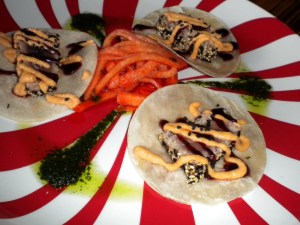 4 thoughts on “Mini-Milestones and Bay Adventures”