“…would not, from all the borders of itself,
burst like a star: for here there is no place
that does not see you. You must change your life.”

Last week I received the last line of this poem in an email from my local and most frequented yoga school; the “teacher spotlight” was on one of my favorite instructors, a Japanese woman whose class I’ve been attending since last August. In the blurb she had written about herself and her teaching philosophy, she discussed the recent trip she had taken to Italy with her husband and children and how, when they saw Michaelangelo’s “David”, this poem had immediately sprung to mind, particularly the last line, which had always puzzled her. I should mention here that, while an enjoyment of poetry doesn’t exactly come naturally to me, I a) actually surprisingly enjoy poetry in the context of yoga (i.e. applying it to life and learning some lesson from it, rather than subjecting it to an academic dissection and/or debate about its significance) and b) despite my general reluctance, I’m really trying to like it (some people attempt to teach themselves to enjoy mushrooms, others try to learn to dance. Me? I sit around attempting to make sense of and identify things trickier than iambs. Clearly, the point is that we all have our burdens to bear). And something about this poem, as cheesy as it’ll sound, really “spoke” to me in that moment. So, besides lots of other good and worthwhile things (from planned recipes and Thanksgiving travel plans to a travel grant and a finished prospectus), change is officially on the menu.

However, what does this have to do with today’s recipe? Everything. And nothing. In any case, I just thought you should know; after all, don’t readers generally keep an author honest? 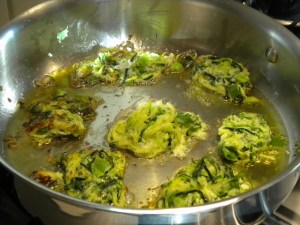 A few of these proposed changes (I have a thing for lists–lists that often turn into paragraphs [whatever!]; just bear with me. And, yes, with the above photo, I’m shamelessly trying to tempt you to keep reading):

1) Take better advantage of my proximity to the fine city of San Francisco, which I already started doing these past two weekends by first going for Mexican food and doing some shopping in the Mission (ok, yes, we also snuck off to Bi-Rite because the Salted Caramel stole my heart long ago and I’ve never gotten it back) and then by attending the “Birth of Impression” exhibition at the de Young and walking around Golden Gate Park (see above photo). When you leave your personal bubble for a day, you realize how much there really is to explore! Try it; I bet you won’t be disappointed.

2) Don’t let stupid things affect my mood. For example, let’s say you run to the bus stop, get there just as the bus pulls up to the stop sign no more than 3 feet away. You smile winningly and mouth, “Will you let me on the bus”? She mouths back with the stern and surly face of a person working for bus line facing a major deficit and serious service cuts, “No.” Do you want to rail at the heavens for being so brutal and unfair? Absolutely. Do you give into the urge? Absolutely not. Babies are reactive; adults aren’t. That doesn’t mean, however, that you can’t spend your insanely long wait for the next bus eating an ice cream cone or getting a Mexican hot chocolate to comfort your somewhat bruised ego. Time should always be used wisely. At least that’s what my professors say. 🙂

3) Don’t rigidly stick to the plan, recipe, agenda; have discipline, but allow room for the daily possibility of adventure. With a friend today, I took a literal detour and we ended up at a gold mine of blackberries hidden away on our campus. Yep, after a filling lunch, dessert will sometimes find you. And, more importantly, there are clearly some things in this life that are still free.

4) Try to be more consistent about posting! What can I say for myself? I got swept away by Valery Briusov reading. Trust me, after reading about his romantic exploits and tortured love affair (an affair during which he sent a letter to his main rival for his lover’s heart in the shape of an arrow warning him to stay away and that his “dark” influence would prevail; yes, these people were crazy, but glamorously so) it could easily have happened to you too. Plus, I’ve barely been home these past few days since I now wake up every morning at 8 am to union demonstrations against AC Transit and the chant: “We’re the mighty union, the mighty, mighty union! What do we want? CON-TRACT! When do we want it? NOW!” I kid you not. This is all true. And once they bring out the horns and police sirens, no work or cooking can be done. And when something like this is disrupting both your life and concentration and you can do nothing to change it, the only thing left to do is flee.

I could list a gazillion more of my proposed goals (yeah, I don’t do things in a small way; I should have been born in Texas), but instead, for now, I’m going to give you the zucchini fest finale, which, considering how good these were, should represent a change in all of your dinner plans for tomorrow. They’re that good. Also, being easy to prepare, they represent the kind of change that is easily within everybody’s reach….

-Sprinkle zucchini with salt and let it sit in a colander for at least 20 minutes.
-Squeeze dry (this may take more than one squeeze and can be quite taxing) and mix in a large bowl with the remaining ingredients, except for the oil.
-Season with salt and pepper.
-Heat 1/4 cup oil in a nonstick (I repeat, nonstick) frying pan, drop tablespoons of the mixture into the hot oil, and cook until golden brown on both sides.
-Drain on paper towels.
-Dish can be served hot or cold.