“East, west, hame’s best.”
-the wise words of Gilbert from Anne of the Island

Yesterday I woke up to the sound of car alarms going off and the girl upstairs playing the Village People at about 8 AM. The former didn’t stop for at least a good five minutes and, as for the latter, the general belief held by most reasonably normal people must be that nobody needs to be listening to “The YMCA” at that hour. However, I wasn’t bothered…not in the least. You want to know why?

I was home. “Home sweet home.” “There’s no place like home.” I could probably provide–and happily!– at least 5 other cliches on this same subject, but there’s no need. The real point is that it’s wonderful to be back, surrounded by my books, clothes, cookbooks, coffee bean grinder (seriously, I was practically bereft without it), pink, fluffy, bee-yoo-ti-ful and sparkly things, the random piece of Hello Kitty memorabilia…I went outside today and, when I say that I felt a rush of love for the neighborhood, my building and even the often overly friendly and somewhat invasive owner of the local dry cleaning establishment who said hello, I’m being 100% truthful.

Will these euphoric feelings last? Probably not, but I’m going to enjoy them while they do. Just knowing both where the heater is and how to turn it on (according to a friend who wisely listens to NPR, it’s the coldest summer in 40 years; as last week you could have found me in a bed in the hills sleeping under a down comforter wrapped in a fleece robe for extra warmth, I believe NPR’s right), as well the fact that I am now both dog-less and hamster-less, it’s like a new lease on life. And, not even two full days into my triumphant return, I’ve already cooked up quite the storm! I had a friend–a friend with whom I wanted to celebrate the recent good news of her engagement 🙂 –over for lunch today; our feast included Buttermilk Squash Soup (if you, like me, foolishly left your beloved garlic at a professor’s house, were hoping for additional flavor and just happen to have pimentos in your fridge from recipes past, it makes a fine garlic substitute; as I like to say, “Be bold!”) and the fantastically delicious Buttermilk cookies featured in the above photograph (coincidentally enough, with birthday finery that another friend had bought for me; I really need to put that dachshund cookie cutter to work). 🙂 They were just what the doctor…errr, the author, ordered. The simple truth is that my craving for them started when I was reading a Sologub story in which the main character, swept away by the fantasy of escaping his humdrum and bleak existence, drops the most delicious sounding yellow cookies on a crowded Petersburg street (if being in possession of such cookies doesn’t sound overly bleak to you, he wasn’t going to be the one to eat them…and, Sologub being Sologub, he was probably brutally spanked for having dropped them. *Judge not the lady by the books she reads but by the baked goods she produces after reading them*). Clearly, the point of dissertation research is to bake what you read–sometimes literally, sometimes metaphorically…

Dinner for one then needed to be contemplated and, since a trip to the grocery store was made today, the options were endless. I felt the need for protein and was in an egg-y kind of mood, so I did some research (the hallmark of any “scholarly” personality) and came up with this: Curried Egg Salad (trust me when I say that adding a few raisins to this dish will automatically make it ten times better) on my favorite toasted sesame bread. It was a perfect meal, really. Well, except for the fact that, even though I know it’s a really bad idea, I’ve been watching True Blood while eating. Unwise; don’t do it! 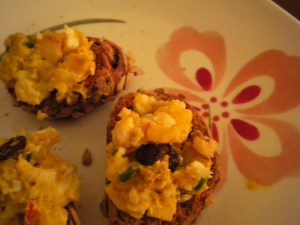 Before leaving you to continue basking in my boundless joy and apartment love (luv!), I just wanted to say that I know I still owe you a recipe for Zucchini Cakes. It’s coming; I promise! Believe me when I say I would never deny you the potential glory of cheesy, dill-scented zucchini fried in oil. That wouldn’t be fair. I also had planned a post on Aloo Gobi (wimp that I am, I added everything but the chile; happy to report that it turned out just fine). 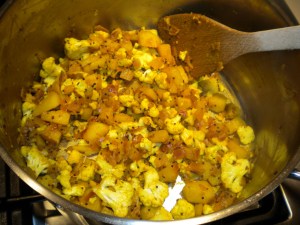 And then there was the successful tortilla that a friend and I made last week. Ok, it’s true: she made it and I watched. Actually, while she was poaching the potatoes, I was putting together this little side dish for us; it’s every bit as good as Deb promised (although, if you decide to make it yourself, please read the link about how all salts aren’t created equal…not something you want to miss). 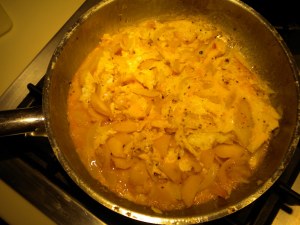 The underlying goal of the above paragraphs is to show that, wow, I really cook too much. Maybe not too much, but certainly too much to post about everything (and, yes, I have the urge to post about everything), so I’m going to have to start, as one professor once suggested about my need to write about everything as well, limiting myself. Being nothing if not pragmatic at heart (and also kind of scared since it’s almost August and the waves of the fall semester are about to crash upon us), one to two recipes a week…..and, if I produce something truly remarkable, maybe, just maybe, the occasional third. I can’t help myself; I enjoy it and, really, there’s nothing more fun than cooking both with and for friends (perhaps something about shared vegetable chopping just really brings out the conversational best in everybody? Sharing the caloric intake? Most likely, it’s just the fact that I have great friends). Plus, in the great brain on instant ramen vs. brain on scalloped tomatoes and tortilla match, we both know which brain would win.