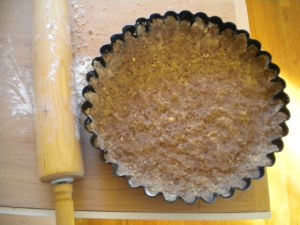 “In life, as in literature, we navigate via the stars of detail. We use detail to focus, to fix an impression, to recall.”
-James Wood (How Fiction Works)

Some days the details really matter: a little fog can chill you to the bone, exacerbating the feeling that maybe you’re coming down with something; a simple phrase like “Due to labor unrest, expect delays” (labor unrest!? Is it just me or is that phrase hopelessly nineteenth century?) can make or break your commute to your surrogate “home”; a scoop of Ben and Jerry’s “Chocolate Therapy” ice cream and its comforting pudding-like texture can make the first 25 minutes of your hour and a half wait for the bus more than bearable, especially when you throw a little Bal’mont reading into the mix; maybe you like to mutter to yourself and, annoyed by the turn your day has taken, you’re working yourself into a fine state and you say aloud in an angry tone “What am I? A common charwoman!?” (again, I’d like to stress that I am not an elitist; I’m just somebody whose nostrils are still smarting from having cleaned out a hamster cage yesterday…perhaps one day, thanks to the vivid memory of this detail, I’ll have to tell my heartbroken children that mommy doesn’t keep rodents in the house. Some memories aren’t worthy of nostalgia), and then blush when the man across the street walking his dog throws you a knowing grin and says hello…Clearly, this is but a small sample of the details that made up my day, but they’re the ones that stuck.

Then, there are other times when the details don’t really matter (at least not in a big picture way). For example, last week I had a friend up for a dinner I had decided we should call “Zucchini Fest.” Why? Because it’s summer, zucchini is delicious and cutesy names make everything more fun (in fact, this has long been a habit of mine: there was “Russian Fever” in college, and then Part Deux/Redux in our post-college years….And then a Birthday BBQ, a Decadent Dinner Party I had this past spring in the lead up to my exams, a time period when all I was thinking about was Symbolism, Symbolism and more Symbolism)! And, between the two of us, I’ve always preferred both order and a unifying theme. This dinner was perfectly planned too; she was going to show me the secret of this delicious Zucchini Cakes with Cheese, Green Onions and Herbs recipe (to be featured in my next post) she had found and I was going to try this Zucchini Tart on a Hazelnut-Thyme Crust that I had been fantasizing about after discovering it on a food blog I enjoy reading. We had decided no dessert since we were both feeling a bit dessert-ed out. 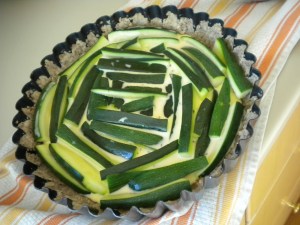 But after painstakingly throwing the tart together (as a brief aside, I basically followed Clothilde’s recipe to the letter, although I added more mascarpone cheese, which, frankly, is just as one always should in these situations. To be precise, her 1/4 cup became 1/2 cup in my version and, for more flavor, I also added some thyme to the cheese mixture. Also, I’ll say that, despite the presence of the rolling pin in the above picture, I found it to be unnecessary. This is perhaps because my impatience–are you seeing a unifying theme/detail here?–got the best of me and I let the dough sit in the fridge for only 45 minutes to an hour) and making the zucchini cakes, we wanted sugar. However, as I hadn’t been planning on dessert, I didn’t know what to make and, more importantly, I had only one egg. A true conundrum.

You might think that I would have let a tiny, yet oh so important detail like this dissuade me, particularly considering my recent tortilla failure, but, no, in this case I knew it was going to happen. After all, dessert is my thing; having eaten lots of cake in my life (and then some), I knew I had at least a 75% chance of success…but the real reason I think I decided to go for it in spite of my ingredient limitations/deficiencies was that we were having such a nice night and a good time cooking together that the outcome didn’t matter. Plus, come hell or high water, we were clearly going to eat whatever came out of the oven. 🙂 These kinds of realizations can really be a confidence booster.

A Vanilla Cardamom cake was mentioned, but, in the true spirit of the evening, I decided to add zucchini (flavorless in this context, but good for making a cake moist)…and then also the cherries that were in the refrigerator. Thus was born a Zucchini and Vanilla Cardamom Cake with Bing Cherries (more affectionately dubbed the “Everything Cake”). You might be wondering how I managed with only one egg? Since adventure was the name of the game, I went with Lemon Curd and the leftover mascarpone. A moment of inspired genius or madness? Make this yourself and see. We were happy with the results; this cake, a combination of tangy and spicy deliciousness with a spongy texture, may just be a keeper… 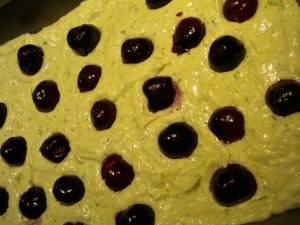 -Preheat the oven to 350 degrees. Line a 9×13 cake pan with parchment paper.
-Cream the butter and sugar with an electric mixer on medium speed.
-Add the egg, then the lemon curd and finally the mascarpone and vanilla, beating after each addition.
-In a separate bowl, whisk together the flour, baking powder, cardamom and salt.
-Add half the flour mixture to the wet ingredients and mix on medium speed.
-Add the remaining flour and the grated zucchini, beat at medium speed, then increase to medium-high and beat until incorporated.
-At this stage, add the half and half and beat until just combined.
-Add ½ tsp. of baking soda and mix it in with a spoon.
-Pour the batter into the prepared cake pan and place the cherries on top (they will sink when baking)!
-Bake for 22-25 minutes (as I baked mine for 25 and it browned slightly on top, I would say 22 minutes should be sufficient. Then again, despite being a little brown in places, the flavor was perfect).