“I was talking about time. It’s so hard for me to believe in it. Some things go. Pass on. Some things just stay. I used to think it was my rememory. You know. Some things you forget. Other things you never do. But it’s not. Places, places are still there.” – Toni Morrison, Beloved

Blogging is a funny thing; just when you’re certain that maybe you have no readers (or, at the very least, only a few), you get a comment from one telling you in a somewhat indignant fashion that you need to update more often and give his starving eyes something deliciously pleasant to look at. After all, the poor soul is in Moscow and so you can’t blame him for wanting something a little easy on the eyes. :)…..So here I am in the Pittsburgh airport, writing what is sure to be a disjointed post after a brief trip to the city of my heart, dear old New York (photo of Grace Church below, taken during one of my many rambles).

It was a lovely surprise to know that the blog/my internet presence had been missed by somebody =P, although the simple fact of the matter is that, having been away and on vacation, I have produced zero recipes of my own. Instead, I have been out and about, both gluttonously sampling the food at several fine establishments and also myself serving as food, at least for the ravenous mosquitos living on the tiny and oh so humid island. I kid you not; from my pinky finger to the tender skin above my elbows, I have quite clearly proven myself to be delicious. It’s either me or my vanilla-scented body wash; neither is a particularly comforting thought, especially the latter since, having grown-up on the east coast, I really should have known better. But I digress and probably largely because the itchiness of my arms is unbearable…In any case, my apologies; this is hardly the stuff of a food blog (what can I say? Traveling may just bring out the whiner in me)!

Instead, what you really want to hear about is my trip, which was truly lovely–just as it should be. My goals were simple: to see friends and to eat good food. To put it simply; done and done. 🙂 From Tuesday afternoon to Sunday morning, I basically moved from neighborhood to neighborhood, eating my way through the city; some highlights:

1) after a Russian musical evening at Avery Fisher Hall (a girl has to pay her duty to her chosen profession no matter where she goes), dinner and olive oil gelato at Otto (they were out of the Salted Peanut, but let me assure you that Olive Oil fit the bill in terms of the just right combo of sweet and salty)

3) onigiri and the best green tea and black sesame macaron of my life (a delightful combo, as well as in terms of flavor) from a Japanese bakery, Pan-ya, that stole my heart even though they insist on also selling tacos and burritos; they were so delicious and travel-friendly that I even bought some for the road (ume, or plum, has always been one of my favorites; sour things make me happy) 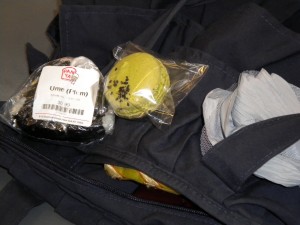 4) a seared Mackerel filet with Cumin Orzo at Mary’s Fish Camp in the West Village, where a friend and I had planned on going for the Lobster Rolls and then decided to deviate from the plan amidst talk of the pitfalls of grad school and the joy of Kitchen Aid mixers 🙂 It was a beautiful day and, in fact, just around the corner I found the building I would happily live in if I were to move back to Manhattan and suddenly discover myself in possession of a vast fortune….

5) Russian food at the Mari Vanna, where they infuse their own vodka (honey and oat vodka = surprisingly delicious) and offer the friendliest Russian service I’ve ever seen either in Russia or outside of it, which is no mean feat! Although I do have to laugh because they translate sosiski as “sausage”, when any Russian speaker knows that sosiski really means “hot dog.” Even knowing this, this is what I ordered, which I suppose you can attribute to nostalgia for the motherland, although I was highly amused when the hostess came over to see how I had enjoyed the Russian sausages that are “unlike any other.” You’ve got to love that Russian messianism extends even to good old-fashioned hot dogs!! 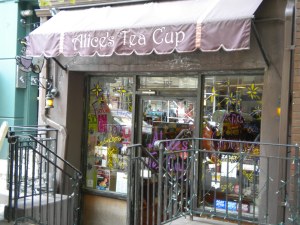 Two tea services: one with a grad school friend at Alice’s on the Upper West Side and another with my old college roommate at Podunk, where we appropriately shared the “Old Friends’ Tea” and iced creamsicle tea (the photo below is after we put a dent in it and the clotted cream….and, believe me, the dent was a large one). 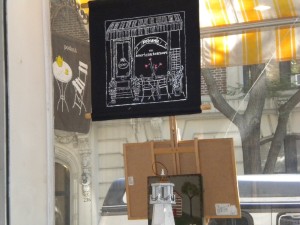 7) a pulled pork platter at Blue Smoke that I barely put a dent in (how much pork can one girl honestly eat?)

I could go on and on–really, that all just seems like the tip of the iceberg!– but perhaps I’ve already overstayed my welcome by being overly bubbly about the various foods that I’ve enjoyed in the past week? In any case, the real point here is that I had a lovely time; New York never fails to deliver. There’s too much variety, too many fantastic things just waiting to be discovered around every corner…..The good news is that, after such an ongoing and largely celebratory feast, I’m now ready to return to work. Ivanov-Razumnik awaits me, as does Sologub. And my palate has been inspired by my travels: I’m ready to attempt an eggplant pasta, macarons of my very own, and maybe even something resembling the Cumin Orzo of Mary’s Fish Camp (as requested, it may be a fancier version of Russian plov, or rice pilaf). Let’s bring on the age of productivity! And maybe Spanakopita; I’ve had a hankering for Greek food recently. We’ll see how that turns out.